SEAN: I am debating how much longer I’m going to keep using Midtown’s list. I started using it because a) I get my manga mostly from a comic book store, and b) it usually has next week’s list out before anyone else. But its resemblance to what I get at my comic shop every week has been growing smaller and smaller. Next week’s has all the Viz stuff we got in today, but doesn’t have the titles Viz actually has scheduled for next week. And, as always, Midtown doesn’t like Seven Seas much at all.

So this list is my usual fusion of Diamond, asking my comic shop guys what’s out for me next week, and Amazon. With that in mind… there’s a HUGE PILE again this week.

First off, Dark Horse is releasing Vol. 3 of Blood Blockade Battlefront. The words “Nightow” and “Battle” still give me horrible flashbacks to Trigun’s action artwork, but I know this has a ton of fans who have no issues working out what stuff is flying where.

Digital Manga Publishing has a quartet of titles due out. I’m not sure if DMP is using the bunko books as sources for Bad Teacher’s Equation or not – if they are, Vol. 5 may be the final volume of this series.

MICHELLE: I *think* that they are, though I’m not sure about that.

SEAN: Secret Thorns is a one-off that features my favorite kind of BL manga: a cover I don’t hate!

The same cannot be said for Sleepless Nights (though it’s not horrible), but the Odd-Couple-esque premise at least sounds like it will promise wacky shenanigans before the good stuff.

MELINDA: I feel like I should have something to say here… but I don’t. None of these really sound like My Kind of BL.

MICHELLE: I too like the Secret Thorns cover, but it’s by Kikuko Kikuya, whose Entangled Circumstances *also* had a really cute cover but was ultimately kinda disappointing. I’m wary.

SEAN: And lastly, in the non-BL category, DMP have the first volume of a seinen manga from Houbunsha’s Manga Time Jumbo, one of the infinite Manga Time titles that litter the landscape in Japan. Start with a Happy Ending seems to be about a newly deceased woman becoming a cat for 7 days before she goes to heaven, and the heartwarming stories that follow. Sounds intriguing.

Kodansha has a debut shoujo title! Ema Toyama, author of I Am Here!, has a longer series that also ran in Nakayoshi about a cell-phone novelist ignorant of romance and her blackmailing friendship with the class heart-throb, which Kodansha has smartly retitled Missions of Love. I talked about this as a license request a long time ago, and was very pleased to see Kodansha pick it up. If you like Devil and Her Love Song, but want something a bit sweeter, this may be for you.

MELINDA: I never read I Am Here! (despite the fact that Michelle loaned me the first couple of volumes ages ago), but maybe this will win me over to Toyama? It certainly sounds intriguing!

MICHELLE: It does, but probably more so because I ended up liking I Am Here! more than expected.

SEAN: Seven Seas is absent from Midtown’s list, but my store says they have some titles coming in. The biggie for me is Volumes 3-4 of Young Miss Holmes by Kaoru Shintani. I read Vol. 1-2 expecting something a lot more lolicon, but was surprised to find an addictive set of mysteries that treated Holmes with respect and had the best Action Maids I’d seen in ages. This 2nd omnibus deals with, among other familiar stories, The Hound of The Baskervilles (like they were gonna not do a pastiche of that), and The Five Orange Pips (wait, what? Seriously?!) The release comes out slow as molasses, but I’m so glad the next one is here!

MICHELLE: I have the omnibus of 1-2. Must get ’round to reading it!

SEAN: There’s also Vol. 1 of the new debut, Haganai: I Don’t Have Many Friends, the latest in Seven Seas’ autumn of moe. This is still pretty ecchi, and runs in Monthly Comic Alive, but if asked to choose between the Big Brother title, the forthcoming Mayo Chiki, and this, I would take this in a heartbeat. It’s about a club of misfits supposedly devoted to learning social skills.

Angel Para Bellum hits Vol. 2, and I must admit Vol. 1 did not impress me, so I have little to add.

And Alice in the Country of Clover hits Vol. 3 of Cheshire Cat Waltz, which has walked a nice line between innocent and saucy, as well as between meaningful and aggravating. As the best game tie-ins always do.

MELINDA: I still haven’t read anything in this series! Shame on me.

MICHELLE: Don’t start with these Clover spinoffs. At least Cheshire Cat Waltz is a lot better than Bloody Twins!

SEAN: Vertical also has a debut, HeroMan, which comes from the pen of Stan Lee (with an assist from the anime studio BONES) that ran in Square Enix’s Shonen Gangan. It’s a title for younger readers (though still readable for adults), about a kid who wants to be, well, a hero.

MELINDA: Given my reaction to Ultimo, I am not optimistic about the chances of me liking something from the pen of Stan Lee, sorry to say.

SEAN: And there’s the final volume of GTO: The Early Years, which rounds out this delinquent manga with a flourish (and has a few mild hints of GTO proper, mostly Onizuka realizing he has no clue what to do with his life). I wish it had sold better, but kudos to Vertical for finishing this classic.

Midtown lists for Viz all the titles we talked about last week, so go there to see those. As for this week… deep breath… 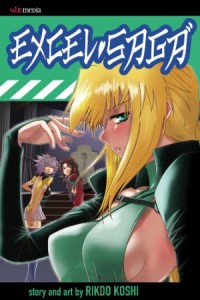 SEAN: It’s Excel Saga 24!!! Five months earlier than I had expected! Not only that, 25 is due out in April! It’s an Excel Saga speed up, just like Naruto! We’re only 4 away from the end now, and things are well into the endgame, with Excel’s very existence now at stake. You cannot miss this title!

In non-Excel Saga Viz releases, the license rescued 07-Ghost has its debut, with Viz redoing Vols. 1-3 (originally put out here by Go! Comi) before finishing the series. It’s an Ichijinsha (is this shoujo or josei?) series, which runs in Comic Zero-Sum, and is a fantasy supernatural thing with BL overtones. As is Zero-Sum in general, really.

MELINDA: I tend to like manga from Comic Zero-Sum, so I’m kinda looking forward to this!

SEAN: After being delayed for four months, we finally see the final volume of Cross Game (and judging by sales, it may be the last Adachi we see over here for some time.) The ending to this manga is terrific, I want to say. Don’t miss it.

MELINDA: I’m behind on this series, but definitely hooked. I’ll be picking this up!

MICHELLE: I can’t wait to read the ending of this, though low sales bum me out. In the continuing theme of “stuff I have but need to somehow find time to read,” I’m reminded that I’ve got a couple series of his in French. One of these days…

SEAN: Inu Yasha’s BIG edition trundles along, hitting lucky No. 13 this time around.

And speaking of Takahashi, Rin-Ne also keeps trundling along, finally arriving at double digits. Its hero and heroine may bear no resemblance whatsoever to Ataru or Lum, but it’s still Takahashi through-and-through, and has just as much chance of resolving.

SEAN: And for those who saw Evangelion 13 this week and thought about giving it a try, Vol. 1-3 are out in an omnibus. Get it for Shinji. You mustn’t run away.

Lastly, Midtown (hey, back to their list!) has a giant pile of Yen releases that are coming out later on Amazon, so it’s back to the comic shops. Bunny Drop 7 finally gets around to working out the unresolved issues between Rin and her birth mother, and sounds fantastic.

MELINDA: I was skeptical of the later volumes of Bunny Drop, but after reading volume six, I’m definitely looking forward to more!

MICHELLE: Now it’s my turn to be ashamed for not having read any of a series!

SEAN: Haruhi-chan, the 4-koma spin-off that I care about and no other blogger does has reached Vol. 6. It’s funny and adorable. And genuinely moe, as opposed to “loli boobies!” moe. :)

Nabari no Ou is headed towards its climax as we reach Vol. 12, and yet is still sadly known as “that other ninja manga.”

MELINDA: “Sadly” really is the word here. Nabari no Ou is so much more interesting than the much bigger ninja manga. I wish it was getting more attention in the manga blogosphere.

MICHELLE: I’m happy that Yen’s continuing to release it, though. Looks like we’ll safely reach the conclusion.

Coming out a mere 4 years after Vol. 2 (blame Japan, not Yen – the author found an actual hit in GA Art Design Class and took a looooooong hiatus), we have Vol. 3 of Shoulder-a-Coffin Kuro! It’s adorable and creepy and sweet and sort of sad all at the same time.

MELINDA: Kate recommended this quite a while back, which is a strong recommendation indeed. Between the two of you, I’m convinced!

SEAN: Soul Eater hits Vol. 11 right after its moe counterpart had Vol. 2 arrive. This is more serious and action-packed, and I suspect far more depressing as well.

Spice and Wolf is up to Vol. 7, and I presume still teaching us economic theory?

Lastly (thank GOD), There’s the debut of Umineko When They Cry, the sort of sequel to Higurashi from the same author. Darker in tone than its predecessor, it still has a lot of cute wacky comedy before everything goes to hell. It too runs in arcs, and this first omnibus collects the first two books of the first arc, which ran in Square Enix’s Gangan Powered.

MICHELLE: This time, I’m going to follow this one from the beginning!