I’m not a huge fan of horror manga as a genre, nor am I particularly easy to scare. But I do find that when a manga can scare me, it sticks with me forever. While a good ghost story is generally the ticket for me (and indeed I picked out three ghost hunters for my last Halloween column), there are other types of monsters that can get to me as well—often in complicated ways. So, without further ado…

1. After School Nightmare | Setona Mizushiro | Go!Comi – As I realized in the midst of a Let’s Get Visual column last year, sometimes the scariest monsters are the ones we see in ourselves. In After School Nightmare, Setona Mizushiro explores the terror of a group of high school students who are forced to endure a series of shared nightmares in which they appear as the physical manifestations of their own worst fears… about themselves. As you can see from the scans included in that column, the results are twisted, eerie, sometimes grotesque, and may hit just a bit too close to home for many readers (including this one). *Shiver* 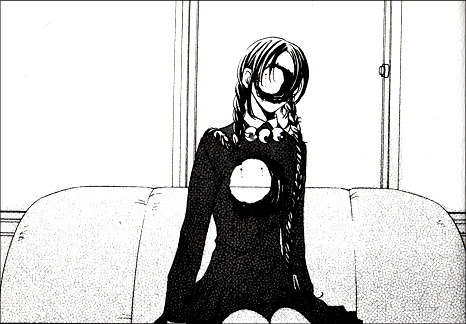 2. March Story | Hyung Min Kim & Kyung Il Yang | Viz Media – Monsters aren’t always evil—at least not unambiguously so—and it’s a monster like this who played a big part in winning me over to March Story, an exquisitely drawn comic by a pair of Korean creators working in Japan. Though the series’ first volume was wildly uneven, one of the characters who immediately caught my eye was Jake, the (literally) bigger-than-life mentor of the story’s heroine, March. Though Jake first appears smiling and offering March a ride, she is immediately, utterly creepy, and remains so throughout, despite her frequent role as comic relief. 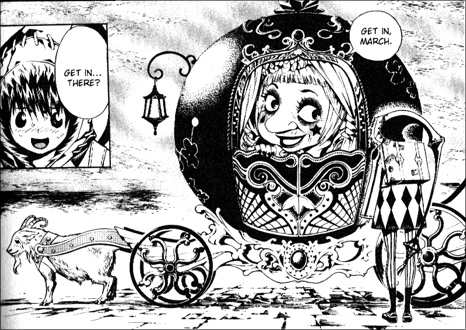 3. Wild Adapter | By Kazua Minekura | TOKYOPOP – Sometimes, our monsters don’t look like monsters, and may even be people we love. Hello, Wild Adapter. While both of the series’ main characters are frequently referred to as “monsters” (and one of them even has a sort of animal paw for one hand), the one who has done many, many monstrous things is Kubota, a former up-and-coming yakuza whose apathy about nearly all other people has made him a fairly brutal killing machine. One of the images that sticks in my mind always is the one below (discussed in-depth in our Wild Adapter roundtable), in which Kubota has helped out a young woman by savagely beating her abusive ex-boyfriend. Though he’s done this to protect her, even he knows that his actions make him a monster. It’s a poignant and chilling moment, especially as we’ve already grown to love him as a character (and continue to love him even afterwards). Well done, Minekura, well done. 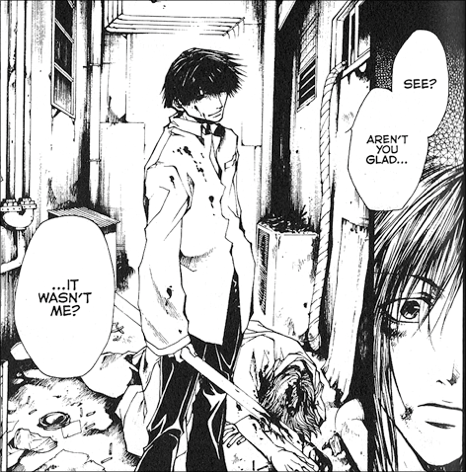 Readers, who are some of your favorite manga monsters? As you can see, my criteria is pretty broad, so feel free to push the envelope!