Welcome to the October installment of BL Bookrack! This month, Michelle takes a look at the debut volume of Bond of Dreams, Bond of Love from SuBLime, while Melinda checks out My Dear Prince at JManga. In Brief: Hitorijime Boyfriend (JManga) and est em’s ULTRAS (DMG). 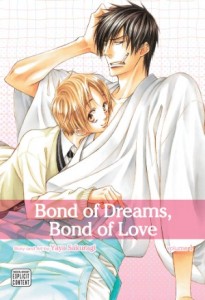 Bond of Dreams, Bond of Love, Vols. 1-2 | By Yaya Sakuragi | Published by SuBLime | Rated Mature – I’ve confessed before that I tend to judge BL by its cover, and I must admit that had I not previously read and enjoyed something by Yaya Sakuragi, I would’ve passed on Bond of Dreams, Bond of Love. Unfortunately, however, this isn’t one of those times where the cover belies the contents. What you see is, in fact, exactly what you get. This manga is all about a shrimpy teenager repeatedly pushing his feelings on his older, tsundere neighbor.

The story begins when seventeen-year-old Ao Sawanoi has a wet dream about Ryomei Kosaka, his neighbor, older-brother figure, and priest of the nearby Shinto shrine. Ao proceeds to openly discuss this occurrence with several people, including Ryomei himself, and then becomes obsessed with making the dream a reality. He pesters Ryomei quite a lot, and eventually snags a kiss, which convinces him that he is in love. Ryomei puts up some token resistance, but when Ao takes his rejection too much to heart and ceases his daily visits to the shrine, Ryomei ends up seeking him out and encouraging his feelings. (There are two volumes yet to go of this series, so as of the end of volume two, the guys are not yet a couple.)

Bond of Dreams, Bond of Love is another of those BL titles that isn’t outright bad, but it’s pretty generic. (I think I am going to start keeping a tally of how often I see that gross, obligatory panel in which a “sexy” string of spittle connects the tongues of the two leads in a BL manga.) I don’t like Ao—he’s vacuous and immature—and I don’t understand why Ryomei would be interested in him. I also don’t get why Ryomei’s friend is encouraging the relationship, but then again, this is the same guy who lets his second-grade daughter man a convenience store alone and has her cook meals for guests when it’s her bedtime.

Most likely I am taking this too seriously, but with so much BL manga now available, there are much better things to read. 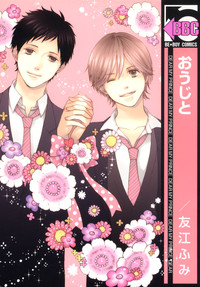 My Dear Prince | By Fumi Tomoe | Published by JManga/Libre Publishing | Rated Mature – Shinta and Tsukasa (whose name can also be pronounced “Prince”) have been dating for a while—in secret, according to the adamant Shinta. The reality is that their whole class knows about them and would do practically anything to keep them together, if only to help out their beloved Prince. Tsukasa (who initiated the relationship) worries constantly that Shinta doesn’t really want to be with him, and Shinta worries constantly that Tsukasa will find out that he’s a “pervert,” but no matter their troubles, there’s a sense from the start that everything will always be okay.

If this sounds like a story with too little conflict to be engaging, that’s definitely a concern. Yet somehow, despite its overly rosy view of teenaged romance, there’s a freshness and adorableness about My Dear Prince that saves it from becoming a total snore. Tsukasa’s spells of paranoia feel mostly warranted, and thus avoid falling completely into either melodrama or camp. In fact, they’re actually quite endearing, which keeps the overall tone light. Meanwhile, Shinta’s worries feel authentic to the trials of adolescent sexuality without ever becoming creepy or pushing him into overbearing seme territory. Mostly, though, what really carries this fluffy little story along is the genuine charm of it all. No matter how unrealistic the boys’ story seems, it’s undeniably pleasant to read.

Like so many BL one-shots, My Dear Prince is only a few chapters long, leaving the rest of the volume to be filled in with several short manga—often of lesser quality. Tomoe’s shorts are a little better than most, mainly due to the same charm she brings to the title story. Even the creepiest of the bunch, “Happy Bride Project,” about a delinquent high school student who strives to become the perfect “bride” after his teacher requests his hand in marriage, is almost saved (I repeat, “almost.”) from its potentially skeevy premise and hideous devotion to traditional gender roles by the power of a cute puppy:

As you see in this panel, Tomoe’s artwork is clear and cute, and that carries over into the volume as a whole, even on a philosophical level. Problems are easily understood and solved, people are adorable—inside and out, and happiness is as accessible as a cute little puppy.

My Dear Prince is no masterpiece, and there’s no denying that amidst a stronger lineup, it would hardly make an impression. But sometimes a bit of good-natured fluff is enough to win the day.

Hitorijime Boyfriend | By Memeco Arii | Published by JManga/Ichijinsha | Rated Mature – Back in elementary school, Kensuke parted with BFF Hasekura on painful terms. Reunited now in high school, Kensuke has a second chance to rekindle their friendship, but “friendship” may not be what Hasekura has in mind. Such is the premise of Hitorijime Boyfriend. Sounds unoriginal but potentially cute, right? Sadly, “potential” is really all it’s got. Though best-friends-turned-lovers is one of my favorite romantic fantasy scenarios, even that can’t survive the book’s relentless non-con or a clumsy English adaptation that becomes less and less readable as the story goes on. JManga has had an increasingly strong track record with BL since first launch. Unfortunately, Hitorijime Boyfriend goes against the trend. Not recommended. – Melinda Beasi

ULTRAS | By est em | Digital Manga Guild | Rated Mature – Ordinarily, I’m not a huge fan of BL anthologies, but the format really shows off est em’s gift for swiftly establishing her characters, enabled by her distinctive, economical, and expressive artistic style. The title story, about a pair of Spaniards who are as passionate about soccer (though for opposing teams) as they are for each other, is more than a love story, it’s a lesson in both tolerance and pursuing what you want despite what others may think. Although this is the best story in the collection, the others are pretty interesting, too. My favorite is probably “Say Hello to Mr. Smith,” which involves a conman, a pickpocket, and a monkey. I hope that someday est em decides to tackle a multi-volume work—it’s awesome to contemplate what greatness might ensue! – Michelle Smith