In 1963, NBC acquired the rights to broadcast Tetsuwan Atomu, or Mighty Atom, an animated children’s show that had been a hit on Japanese television earlier that year. NBC executives renamed it Astro Boy and began airing it in September on WNEW, NBC’s New York City affiliate. Astro Boy proved a success with young viewers, prompting NBC to order fifty-two more episodes from Mushi Studios and syndicate the show nationally (Schodt 88).

Two years later, NBC licensed the Astro Boy character rights to Gold Key Comics . Gold Key was a brand-new subsidiary of Western Publishers, best known to consumers for titles like The Poky Little Puppy and The Saggy Baggy Elephant. The company had considerable experience selling its Little Golden Books through non-traditional outlets — supermarkets, drug stores — and wanted to apply that knowledge to the newsstand comics market, then dominated by companies such as Dell Comics. 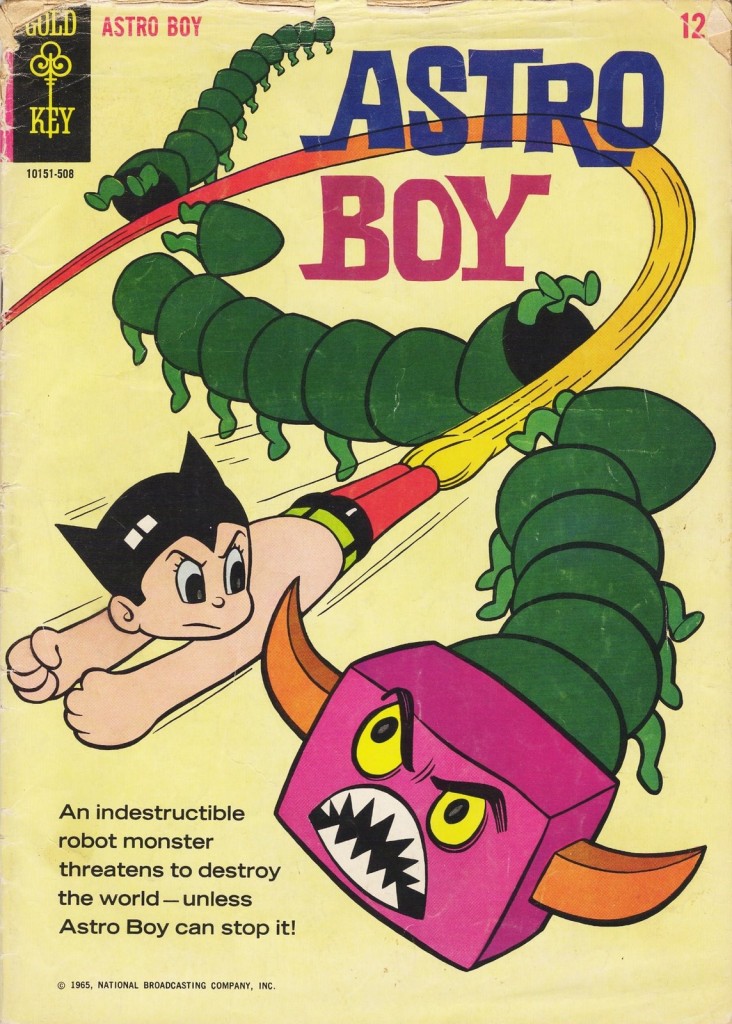 Without the knowledge or approval of Mushi Studios or Osamu Tezuka, Gold Key hired an artist to adapt the Astro Boy show into a comic. (No artist is credited for Astro Boy #1.) The result was a four-color, two-story issue that used Osamu Tezuka’s characters but bore little to no resemblance to the comic that had been running in Shonen magazine since 1952.

“Gangor the Monster,” the first of the two stories, is based on an episode of the Astro Boy show. The plot is simple: Gangor, a centipede-like robot, terrorizes the passengers aboard an ocean liner on which Astro and Professor Ochanomizu (called Dr. Packadermus J. Elefun in the English version) are traveling. Astro Boy soon discovers Gangor’s secret — Gangor is actually comprised of forty-seven identical robots — and quickly defeats it in a battle that unfolds underwater and in the air. As in many Silver Age comics, word balloons carry the burden of the storytelling; though we see several panels of Gangor in action, most of what we learn about Gangor is revealed in conversations between the main characters: 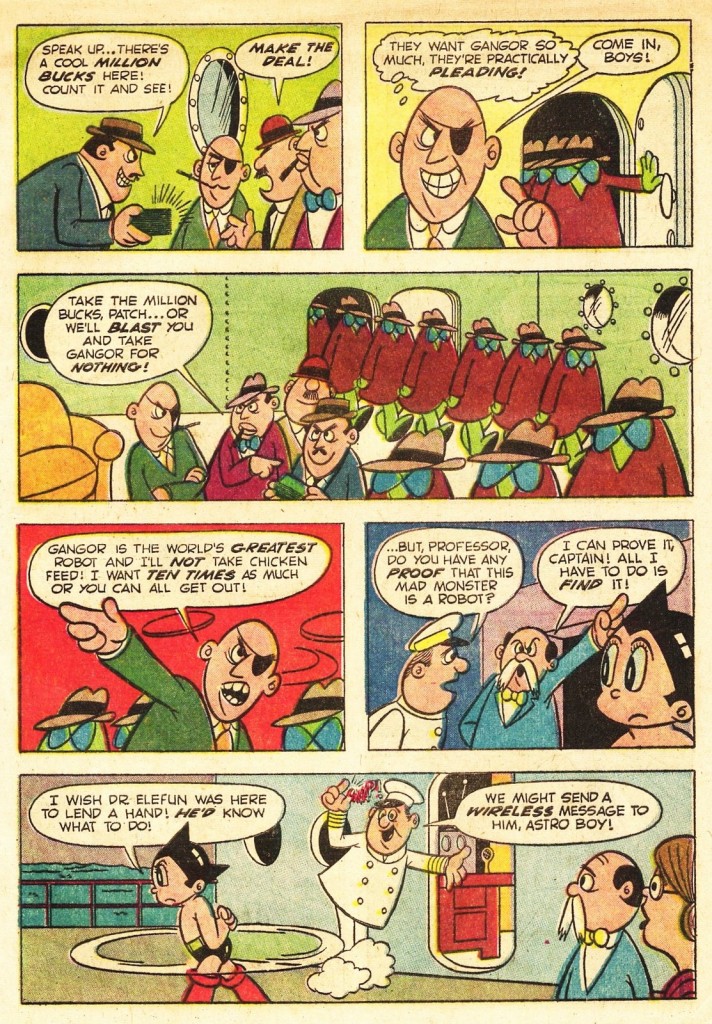 The second story, “Attack of the Mud People” is original, with no obvious precedent in the the show. In terms of tone and plot, it reads like a rejected DC Comics script: a pair of evil scientists unleash a horde of mud monsters on an unsuspecting city, demanding five million dollars in ransom. (Better still: the scientists have mustaches. They also happen to be identical twins. It’s a trifecta of villainy!) Astro Boy is nearly defeated by the monsters, as their dirt clogs his joints, preventing him from flying. In a flash of inspiration, he realizes the best way to stop the monsters is to make it rain — a feat he accomplishes with the aid of a little dry ice. As in “Gangor,” very little actually happens; most of the story consists of characters’ reaction shots as they flee in terror, or watch Astro Boy go mano-a-mano with the monsters.

As the page above demonstrates, both stories look more like generic Silver Age products than shonen manga; small wonder Tezuka deplored it as a cheap knock-off of his work. Yet for all their flaws, both stories offer a fascinating window into the American comics industry in the 1960s.

For one thing, they attest to the the growing importance of television as source material for comics publishers. A quick glance at Gold Key’s catalog turns up comics based on The Addams Family, Dark Shadows, Lost in Space, My Favorite Martian, Star Trek, and The Twilight Zone. Animated shows were an important part of the Gold Key catalog as well. In the 1960s and early 1970s, Gold Key had a partnership with Hanna-Barbera Studios, cranking out comic book versions of The Amazing Chan and the Chan Clan, The Flintstones, The Pink Panther, and Scooby Doo. As former Gold Key writer Mark Evanier explains, there was a standard procedure for taking a new show and turning it into a comic. The first few stories would faithfully reproduce early episodes; after that, the artist was given greater creative freedom to do as he saw fit with the characters:

Chase [Craig, the editor] handed me a pile of storyboards and told me to read them all to get a feel for the property but to write an adaptation of one in particular… Anyway, I was assigned to adapt it and later on if the comic continued, there would be original stories conceived fresh for the comics. As Chase explained to me, he preferred to launch a new H-B book in this manner. The studio had approval rights and the people there could get pointlessly picky about the material…but they rarely bothered looking at any issue after the first few. Therefore, it simplified the procedure to do the first issue as an adaptation and maybe the second. They couldn’t very well complain that a plot taken from the show was inappropriate.

We can see this process at work in the Astro Boy comic as well, with one story based on the show and one story drawn from the artist’s imagination. Of course, no one from Mushi Studios was reviewing the work, as in the model that Evanier describes above; the primary reason for re-telling “Gigantor,” presumably, was to cement the connection between the show and the comic.

These stories also attest to a powerful Western arrogance about the source material; every effort was made to conceal its Japanese origins, from renaming the characters to adding color. More telling still was that Tezuka himself was never identified as Astro Boy‘s creator; NBC was listed as the copyright holder (Schodt 88-89). It never occurred to anyone at either NBC or Gold Key that the very foreignness of the original material — the action-driven storytelling, the frank presentation of difficult issues — might appeal more to kids than a bowdlerized version in which every conflict was neatly resolved in sixteen pages, and no one ever died. For that version of Astro Boy, American readers would have to wait another thirty-seven years.