Welcome to the August installment of BL Bookrack! This month, Michelle takes a look at Flutter from Juné Manga and the debut volume of Punch Up! from SuBLime, while Melinda checks out the first two volumes of Setona Mizushiro’s Dousei Ai at JManga. In Brief: Awkward Silence (SuBLime), Honeydew Syndrome, Vol. 2 (New Shoe), My Boyfriend the Mad Dog (DMG), and Starting With a Kiss, Vol. 1 (SuBLime). 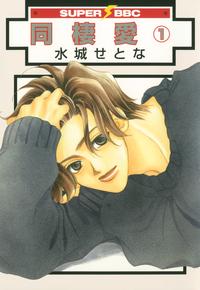 Dousei Ai, Vols. 1-2 | By Setona Mizushiro | Published by Libre Publishing Co., Ltd./JManga | Rated Mature – When innocent middle-schooler Tsubaki tells his classmate Kaoru that he loves him, he is completely unprepared for the consequences of his words. Devastated by Kaoru’s violent rejection, Tsubaki begins to withdraw from his other friends and, as he reaches high school, enters into a sexual relationship with a male teacher in order to ease his growing sense of isolation. As graduation approaches, Tsubaki becomes anxious to get out of the increasingly one-sided relationship with his teacher. But when he tries to break up, the teacher reacts by dramatically outing him to his family—sending Tsubaki running to Tokyo to escape his parents’ visible pain and disapproval.

If the entire series was Tsubaki’s alone, his poignant tale would be more than enough to keep me hooked. But its second chapter makes it immediately clear that Mizushiro has much bigger plans, as she introduces the series’ second protagonist, Koutarou.

Having mainly been raised by his kind, domestically-inclined older brother, Koutarou is a fairly manipulative, smart-ass kid who privately prides himself on being able to “beat” his brother at anything. When his brother brings home a girlfriend for the first time, it seems he’s finally bested Koutarou at something, but the girl sneaks into Koutarou’s bed during the night, providing Koutarou with both the loss of his virginity and proof that he’s still on top (so to speak). Things take a downward turn, however, when Koutarou’s brother announces that he’ll be marrying the girlfriend, who is pregnant with a child he believes must be his. Wracked with guilt and self-loathing, Koutarou falls into a pattern of loveless one-night-stands with any women (and later, men—which eventually establishes itself as his preference) who express interest, all the while keeping up appearances as the guy who’s got it all together.

That was probably more summary than I’ve ever included in a single review in my entire career as a manga critic, but in those two paragraphs you will find evidence of both the best (and worst) things about Dousei Ai. In the category of “best,” well… wow. This is no casual one-shot or simplistic BL romance. Setona Mizushiro has carefully crafted a complex emotional drama with some of the best-written characterization I’ve ever seen in this genre and a long game that is pretty obviously going to offer up significant payoff for the reader. I mean, going into this it’s clear that we’re in for a killer of a ride, along the lines of something like Sooyeon Won’s manhwa epic Let Dai, only better—much, much better. Both Tsubaki and Koutarou are rich, genuinely fascinating characters, who somehow manage to remain sympathetic even as they fall into their individual patterns of using others in order to get by with their own pain. And as the second volume wraps up it becomes clear that the main cast will continue to grow as the series goes on. I can’t wait. Seriously, I can’t.

On the downside—and perhaps at least partially due to the era in which this was originally released—Mizushiro puts a lot of work into making sure we know just how broken her protagonists are, which wouldn’t be a problem if she didn’t also hint at their personal trauma being at least partly responsible for their sexuality. I’m giving her a pass on this so far, since it hasn’t been stated outright from an authorial point of view, but it is the one small bruise on this otherwise deliciously epic treat. And while I’ve heard the series’ old-school ’90s artwork (it began serialization in 1996) described as “ugly,” it satisfies my admittedly-retro tastes with near-perfection.

If you’ve got a hankering for lighthearted comedy or sweet romance, this series is emphatically not the ticket. But for my part, Dousei Ai may be the BL epic I’ve long been waiting for. Highly recommended. 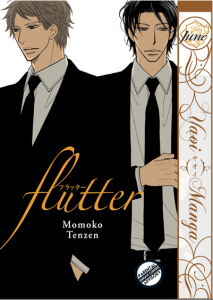 Flutter | By Momoko Tenzen | Juné | Rated Mature – Sometimes I’m tempted to write a review that simply says, “This is really good. Go read it.” Flutter is just such a case, but I suppose I ought to present at least some evidence in its favor.

Masahiro Asada works in the sales division of a company. Although straight, he’s transfixed every morning by the sight of a beautiful male coworker, Ryosuke Mizuki, who is so impeccably dressed and put together that he almost doesn’t seem human. When a project brings them together, Asada gets to know Mizuki—and his all-too-human flaws, sorrows, and weaknesses—and finds himself even more attracted.

There are so many things to recommend this manga. The atmosphere is sort of… elegant and languid, which suits mysterious Mizuki well and makes an earnest everydude like Asada stand out all the more. The growing friendship between the men is believable—and they’re both completely professional adults, I might add—as is Mizuki’s wary reaction when Asada confesses his feelings. Mizuki’s been hurt before, and is concerned he might be tempted to just use Asada to make his ex jealous.

It’s lovely and complicated, and when the guys do finally get together physically it’s wonderfully awkward. I’m always a little embarrassed when BL lets us get to know the guys well before they start getting intimate, because then it feels like we’re spying on something we shouldn’t be seeing. Thankfully, the love scene fades to black before this becomes an issue.

Ultimately, Flutter is the best BL oneshot I’ve read in a long time. This is really good. Go read it. 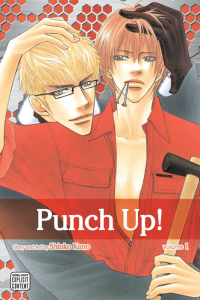 Punch Up!, Vol. 1 | By Shiuko Kano | Published by SuBLime Manga | Rated Mature – Shiuko Kano has had a lot of manga published in America, but somehow, despite owning several volumes, I’ve never managed to read any of her work until this first volume of Punch Up!, which is itself a spinoff of Play Boy Blues.

The concept is pretty simple: Maki Motoharu is a gay architect with a lively appreciation for attractive men. When he learns that his lost cat has been found and cared for by Ohki Kouta, a construction worker helping to build his latest project, and that Kouta has quarreled with his landlord because of that, he offers the younger man a place to stay. Kouta soon realizes that Motoharu’s fancy digs (and cat) are woefully neglected, and ends up bonding with the cat (Nyanta) far more than her owner ever had.

Pretty soon Kouta’s concern for Nyanta translates to concern for Motoharu, and they hook up. What’s interesting about their relationship is that it’s not sweet at all. This isn’t some dreamy romance manga. Motoharu is pretty much a crappy person, but not in an over-the-top villainous kind of way. Kouta realizes this, bemoaning his own lousy taste in men, and has no expectations that their relationship is going to last. And somehow… this seems to give the story a lot of potential to go in various soapy directions while seeming at least a little more realistic than the thoughtful/adorable BL to which I typically gravitate.

Though a lot more explicit than I usually prefer, and tonally different as well, Punch Up! has at least intrigued me enough to check out the next volume, though I don’t see it becoming a permanent fixture in my collection.

Awkward Silence, Vol. 1 | By Hinako Takanaga | Published by SuBLime Manga | Rated Mature – With his impassive face, Satoru Tono has always had trouble expressing his feelings. He can’t even visibly convey his happy surprise when Keigo Tamiya, a popular athlete and object of Satoru’s long-time crush, asks him out. Various obstacles and misunderstandings ensue—drama over a lost cell phone charm, jealousy over a flirtatious female transfer student, and a persistent sempai with an eye for Satoru— but the boys reaffirm their affections as needed and engage in end-of-chapter “romping” with predictable regularity. If you’re thinking, “Gee, that sounds pretty generic,” you’re absolutely right. It’s not actively bad, so I might have read a second volume if the series had ended there, but it looks like it’s up to four volumes in Japan and still ongoing! I am, quite frankly, astounded that Takanaga was able to extract that much material from this tired premise. – Michelle Smith

Honeydew Syndrome, Vol. 2 | By New Shoe | Rated Teen – With Metis and Josh’s relationship well in hand, volume two of this charming BL comic turns the camera on quiet, easygoing Jay and his growing interest in Metis’ caustic friend Charles, as well as a few other members of Metis’ idiosyncratic social sphere. Though this can feel a bit choppy as a volume, the individual stories are just as engaging as the first half of the series, and perhaps more so in places—evidence of this team’s growth over the course of the series. The print version of this webcomic also includes a a terrific prose story about Jay and Charles that offers up some essential character notes on both of them and is not to be missed. Still recommended. – Melinda Beasi

My Boyfriend, The Mad Dog | By Sanae Rokuya | Digital Manga Guild – Akae is an eccentric mangaka who expects his assistants to, er, “assist” with more than just artwork. Honma is a highly sought-after freelancer with ample talent for the job. If this sounds like the introduction to a little mindless porn, you’d only be partly right. Though their story is far from deep, there is some fairly nuanced characterization here, especially in Honma, who refuses to be cast as simply the blushing uke. Unfortunately, the volume’s second couple—an aspiring artist who hasn’t learned the word “no,” and his (apparently) desperate editor—is pretty cringe-worthy throughout. If you don’t enjoy persistent non-con, proceed with caution.– Melinda Beasi

Starting with a Kiss, Vol. 1 | By Youka Nitta | SuBLime Manga | Rated Mature – As a fan of multi-volume BL, I’m usually pretty anxious to try out anything with a volume number in its title, though results are frequently negative or mixed at best. Starting with a Kiss falls squarely into the latter category, with its mix of confusing narrative and comically rushed romance alongside some genuinely interesting characterization. Though Youka Nitta’s yakuza are intriguing, her jumps between past and present read as awkward rather than illuminating. Furthermore, her plentiful sex scenes are hampered by unbelievable relationships that seem to form in the blink of an eye. Fortunately, with multi-volume series, there’s always hope for next time. Not yet recommended. – Melinda Beasi

Review copies of most titles provided by the publishers.