Welcome back to Fanservice Friday!

For those of you who may be wandering over from less manga-obsessed corners of the internet, the term “fujoshi” (“rotton girl”) is used in Japan to describe fans of BL or “boys’ love” (also known as “yaoi”) manga, which is to say women and girls who enjoy stories featuring male characters in romantic and/or sexual relationships with each other, created for a female audience, usually by female writers and artists.

You can find a lot of internet speculation (and a few academic studies) regarding why many women and girls like stories about two men falling in love and/or making out (and so forth), but there’s little doubt that they do like them, and that “they” includes me. I’m a romance junkie and, to hear some tell it, perhaps a perv. (Though for what it’s worth, I get the same enjoyment out of stories featuring a man and a woman or two women making out, so I’m at last an equal opportunity perv.)

Anyhow, given that CLAMP spent some time creating yaoi doujinshi (kinda like slash fanfiction, but comics) before they went pro, it’s likely that they may have once considered themselves fujoshi, And whether they ever did or not, that sensibility is certainly present in their professional work, regardless of its intended demographic.

So now that we’ve gotten all that exposition over with, let’s talk about….

The Fujoshi Heart of CLAMP
(click images to enlarge) 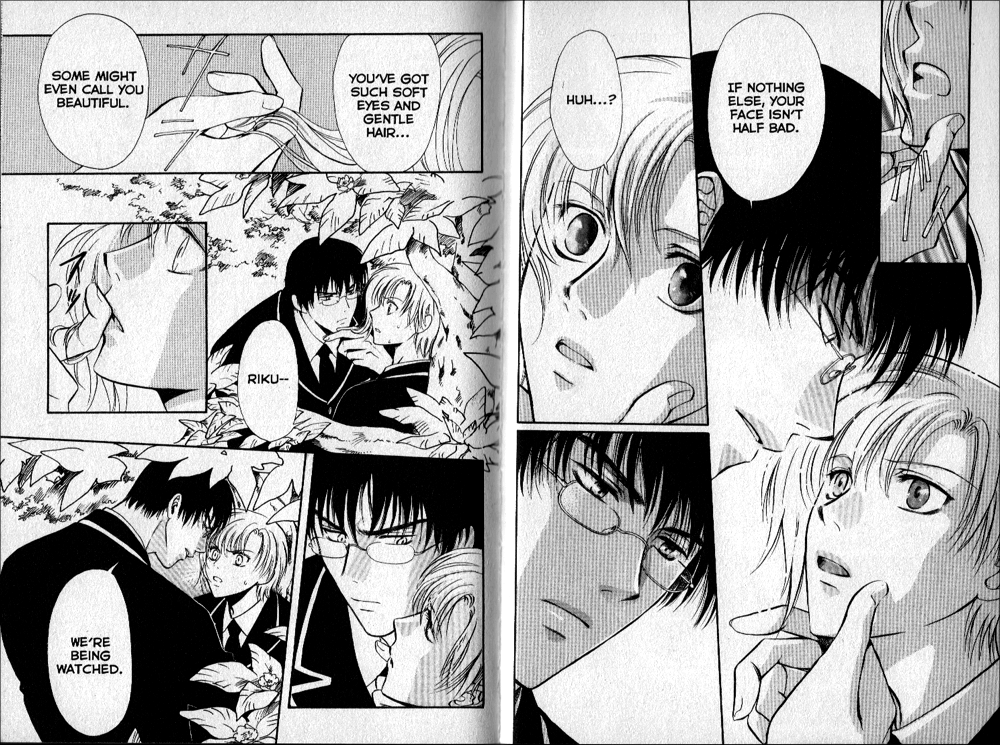 Scenes such as the one above from Legal Drug fall into a type of female-aimed fanservice pretty common in shoujo (and even shounen) manga these days. I like to call this type of fanservice “the tease.” A scene like this is a tease, because it features two male characters caught in a compromising position that ultimately turns out not to be at all what it seems. In this scene, for instance, Kazahaya and Rikuo are posing as clandestine student lovers to facilitate their investigation of a supernatural event at a secluded all-boys’ school, and Rikuo gets mushy for a moment when he realizes they are being watched. Often, this kind of tease is used for comedic effect, like in these pages from Black Butler, but in this scene, CLAMP avoids going for the easy laugh, keeping the mood heavy to intensify the readers’ already-established interest in these characters as a potential couple (and believe me, there’s interest).

Fortunately, humorous BL fanservice is not CLAMP’s specialty… well, fortunately for me, anyway, as it’s by far my least favorite type—both as shoujo fanservice and in actual BL manga as well. Legal Drug is particularly generous with its BL overtones, and it’s also one of the group’s few series to pull some of those overtones out of the subtext and right into the text. It’s made pretty clear throughout the series’ first three volumes, that shop owner Kakei has something going on with his hulky companion, Saiga. 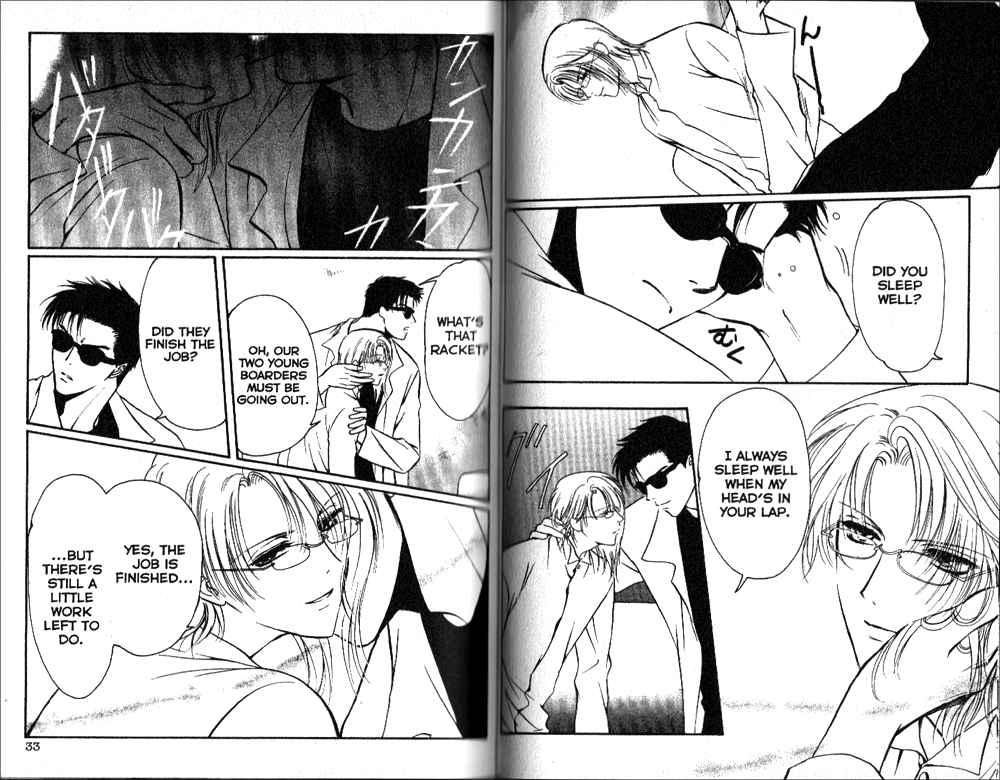 Though anything other than come-hither looks and suggestive embraces is kept pretty much off-screen, I’ve read manga published as BL (Wild Adapter, for instance), that treats its relationships more ambiguously.

Another of CLAMP’s shoujo series to contain a canon romance between two male characters is, of course, Cardcaptor Sakura, and though Toya and Yukito’s relationship is even more chaste on-screen than Kakei and Saiga’s, it’s still notable given the young age of Nakayoshi’s core audience. And frankly, you’d have to have a heart of stone not to melt just a little in the presence of romantic sweetness like this. 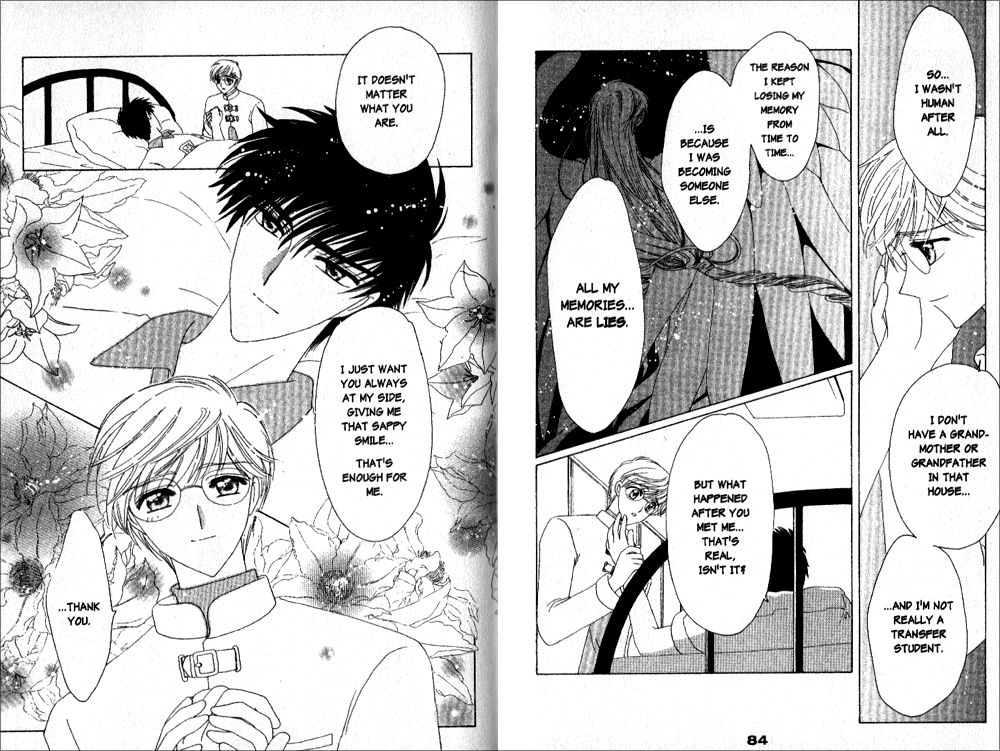 This kind of pure-hearted devotion is at the core of most of CLAMP’s best romances, even those that remain ambiguous throughout their entire runs, and I admit that’s part of what works so well for me. Even in a relationship steeped in rivalry or dry humor, I like to be able to see that sincerity at its core, and this is one of CLAMP’s greatest strengths. It also lends itself to some very touching moments, often with a serious tone.

Even in Tokyo Babylon, where the initially jokey relationship between 16-year-old Subaru and veterinarian Seishiro takes a decidedly dark turn, our hero’s feelings are very innocent and undeniably sincere. 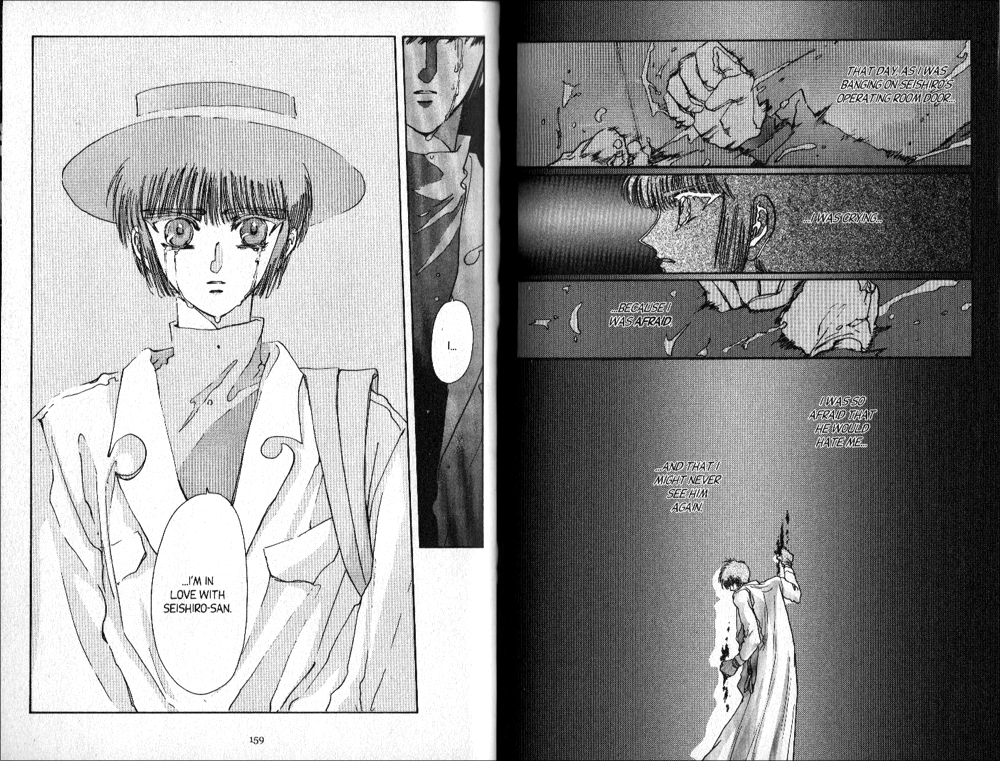 Which is not to say that CLAMP doesn’t ever go for the laugh.

Oh, Watanuki and Doumeki… *sigh*. Probably my favorite of CLAMP’s subtextual BL couples, Watanuki and Doumeki spend most of their time visibly at odds, with Watanuki flailing in protest every time the two of them are paired up (which is often), and Doumeki making dry comments about Watanuki in the background. Much is made of their supernatural compatibility—Doumeki’s pure spirit is constantly necessary for keeping Watanuki safe, while Watanuki’s cooking provides Doumeki with nearly the only food pure-intentioned enough for him to enjoy eating. There’s also the fact that by halfway through the series, the two of them basically share both blood and an eye. It’s a CLAMP staple, of course, but man, it always works for me.

I’ve used this scene as an example before, but really nothing beats it for the perfect combination of prickly banter, dry humor, and undeniable personal intimacy. These characters know each other so well, and even though most of their outward behavior is designed to conceal that as thoroughly as possible, it still shines through, clear as day. 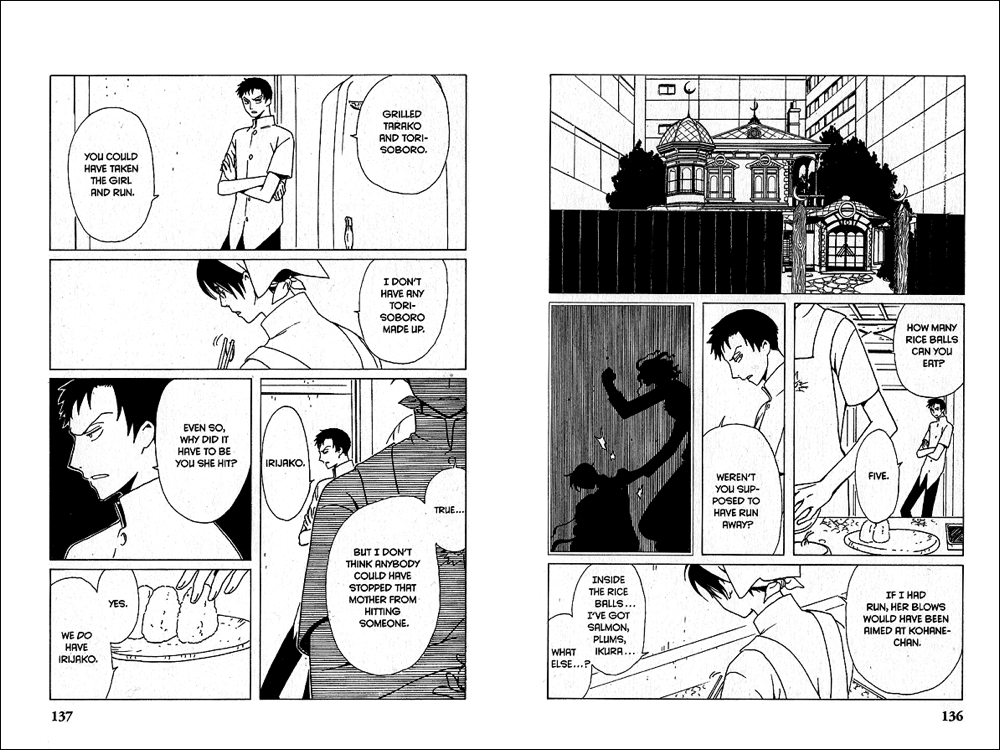 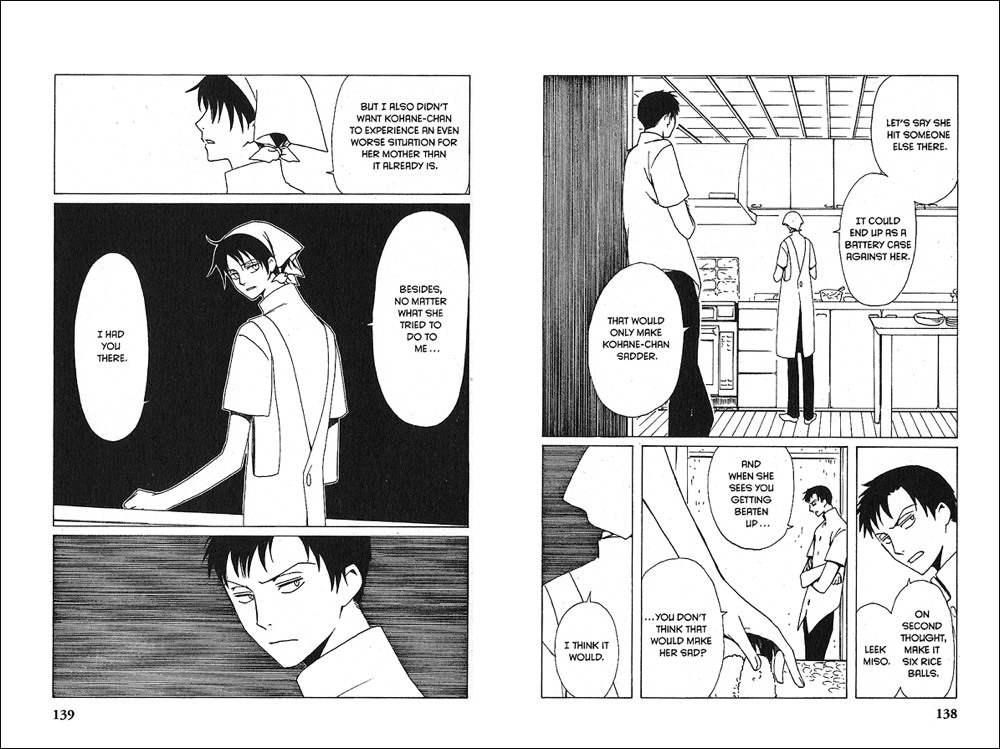 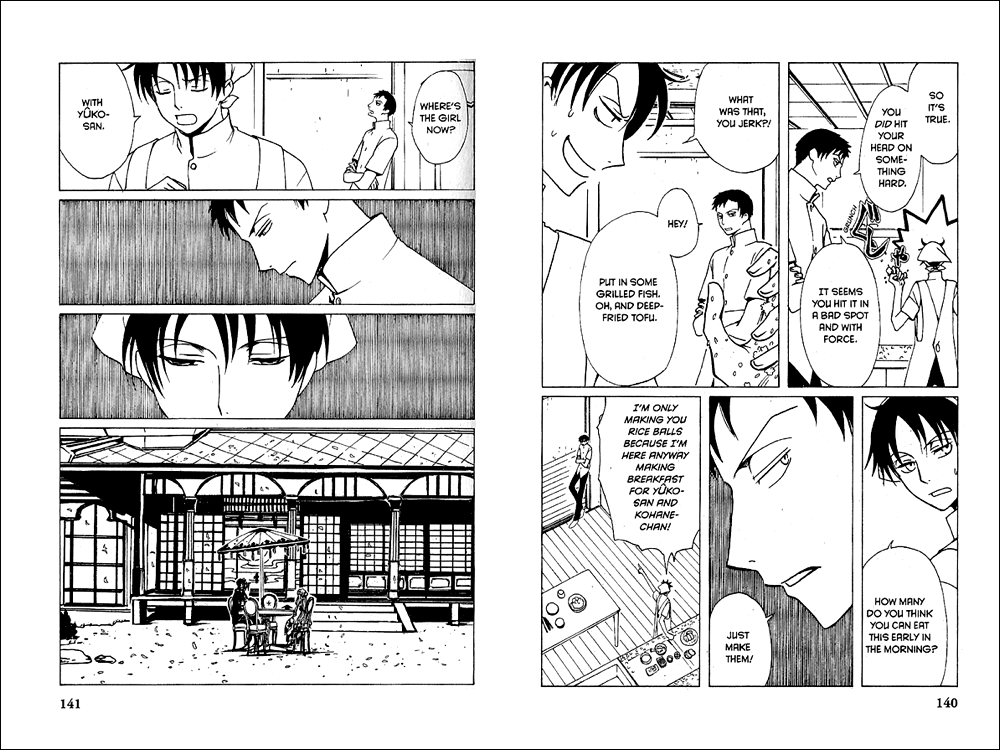 Perhaps the snarky nature of Watanuki and Doumeki’s BL-heavy relationship is due at least in part to xxxHolic‘s demographic (seinen), though they take a much different tack with the shounen-aimed series Tsubasa: Reservoir Chronicle, in which the characters Fai and Kurogane—though beginning as fairly reluctant comrades—eventually develop a deep loyalty and warm friendship that reads very much like romantic love. I once referred to them as something like “the most obvious couple since Remus Lupin and Sirius Black,” but I think they may be even more obvious (or perhaps obvious to more people) than that.

Here’s another quote from my fannish journal when I first began reading Tsubasa: “Oh. Kurogane. If anyone tries to tell me that CLAMP does not ‘ship Fai/Kurogane, I will laugh harder than I have ever laughed in my life. I really will. They might as well put it on a billboard. Almost makes me wish it was a shoujo manga instead, but then there would probably be more flowers and fewer fights, and I admit I kind of like the fights.”

Having read a lot more shoujo manga since then—and particularly shoujo manga by CLAMP (*cough* X *cough*)—I’d have to take back my assertion that a shoujo version of Tsubasa would necessarily contain fewer fights, but I’d still bet money on CLAMP ‘shipping Fai/Kurogane, whether they’ve ever admitted it or not.

Though Tsubasa‘s shounen sensibility lends itself more toward heroic demonstrations of affection (Kurogane gives up his blood and an arm for Fai over the course of the series) than meaningful touches and stolen glances, it does have its moments. 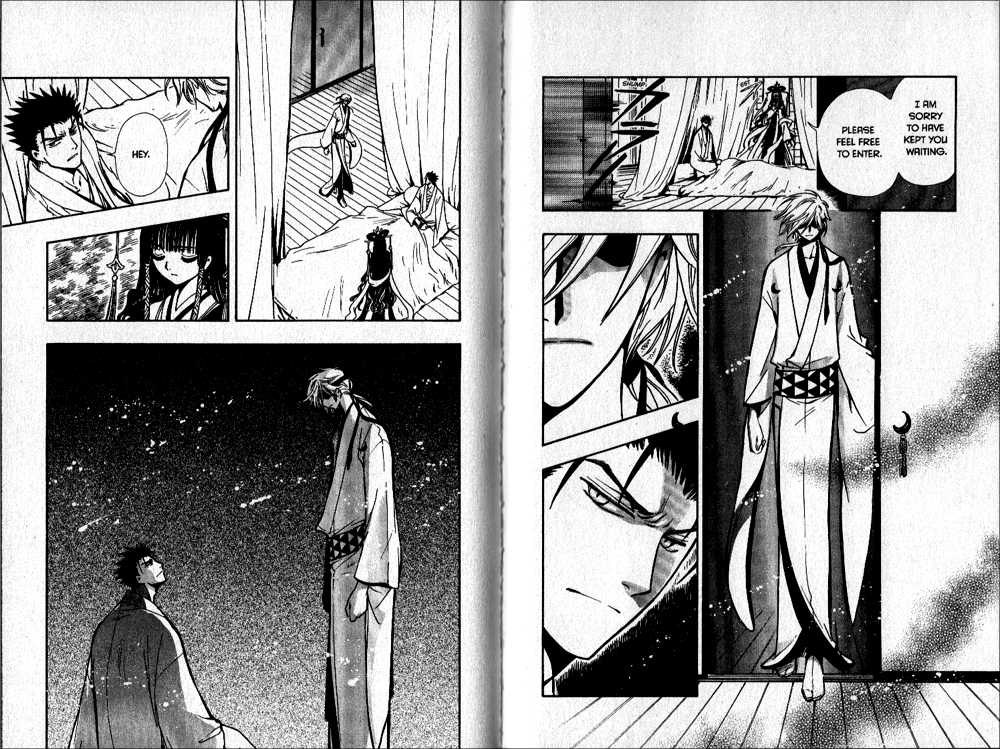 For the record, Fai punches Kurogane on the next page (good-naturedly, of course), ’cause, y’know, that’s how they roll.

I’ve often wished that CLAMP would just go ahead and publish a BL manga—not because I’m dissatisfied with what they’ve already offered up in both canon and less-explicitly-canon male/male romance, but because I think they’d write it very well, and that they’d be likely to give me the kind of epic, plotty BL manga I so wish there were more of—in the English-language market anyway. In the meantime, I’ll take what I can get.

Readers, what are your favorite CLAMP BL pairings?