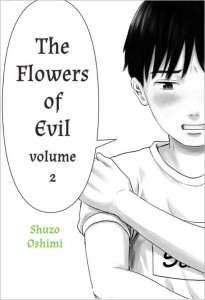 Do you remember the first time you tried to impress someone on a date? I do: I was fifteen, and thrilled that an older boy had invited me to dinner. (He drove a Mazda two-seater and quoted lines from Wim Wenders’ Wings of Desire, which, in 1988, made him a god.) My strategy for wooing him was to describe, in excruciating detail, the nuances of Igor Stravinsky’s Petrushka, from the opening tableau to the final notes. I was convinced that if he could see my passion for something as dark and powerful as that ballet, he’d understand who I really was, and fall in love with that person. (Needless to say, we didn’t go on a second date.)

Kasuga, the earnest hero of The Flowers of Evil, finds himself in a similar situation at the beginning of volume two: Saeki, the classmate whom he’s loved from afar, has finally consented to go on a date with him. As they wander the aisles of his favorite bookstore, Kasuga confesses to Saeki that Baudelaire’s Fleurs du Mal “changed how I see the world. I felt as though I’d been an ignorant fool my whole life.”  It’s a cringe-inducing moment — not because Saeki mocks Kasuga, or recoils from him, but because Kasuga has exposed himself in such a clumsy, sincere, and godawful manner.

That sincerity is nearly his undoing. Throughout the volume, Nakamura goads Kasuga about Saeki, reacting with fury when Kasuga asks Saeki to enter into a “pure, platonic relationship” with him: how dare he pretend to be normal? Nakamura then redoubles her efforts to reveal Kasuga’s “perversion,” currying favor with Saeki while pouring poison in Kasuga’s ear. But to what end? The final scene of the manga offers some interesting, and surprising, hints at Nakamura’s true agenda while suggesting that Kasuga might, in fact, have more in common with her than he’d care to admit. I won’t reveal what happens, but will venture to say that “orgiastic” is an apt description of those last glorious, frenzied pages.