MJ: I’ve just realized how few jokes I know. You always open with a joke. I’ve got nothin’.

MICHELLE: That’s okay. I freely admit that most of mine aren’t very good. And even if you’ve got no jokes, you’ve surely got manga to talk about!

MJ: Indeed I do! Should I go first? 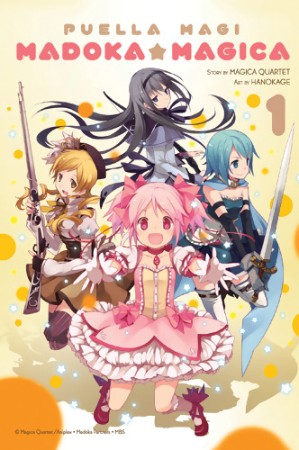 MJ: Well, I know we have a special request to grant at some point here, but before we get to that, my big read for this week was the debut volume of Puella Magi Madoka Magica, adapted from the popular anime series. This is obviously a highly-anticipated release. In a rare twist, I’ve actually seen the anime series, and since I enjoyed it very much, I’d have to admit that this manga series was even highly anticipated by me. Ultimately, I’d say that this is not necessarily in the manga’s favor, though there is a quite a bit here to enjoy.

The series begins just as you’d expect from a magical girl story. Madoka is an ordinary girl with ordinary friends, who is suddenly approached by a talking catlike creature (Sailor Moon shout-out, I assume?) named Kyubey who offers her the opportunity to have a single wish granted if she’ll sign a contract to become a magical girl. This is understandably exciting for Madoka (and her friend, Sayaka, who is also invited), but nothing is quite as it first seems. Madoka’s magical dreams are quickly tempered by the reality of untimely death in a magical girl’s future, as well as by a mysterious new girl, Homura, who for some reason insists that it is of vital importance that Madoka not sign on with Kyubey—to the point that she makes repeated attempts on Kyubey’s life in an effort to save Madoka from him.

Having watched the anime series, there isn’t a lot of mystery in this for me, but even taking that into account, there are ways (mostly visual) in which the manga pales in comparison to its source material. For instance, one of the most spectacular elements of the anime series is the ornate visual fabric of the dimension inhabited by “witches” (the beings our magical girls are being asked to destroy). These encounters with witches are elaborate and rather psychedelic, and they really help to emphasize the series’ darker take on the magical girl formula. In the manga series, these sequences just look kind of drab and lumpy, and they are glossed over so quickly, the sense of real danger and anticipation is lost along with the general aesthetic. Even the fight scenes could really stand to be longer (did I really just say that?), as they seem to lose a lot of their tension and significance.

On the other hand, this story is compelling no matter how it’s told, and if the artist has failed to quite capture its eeriness, its pathos remains intact. I’m happy to see, too, that Madoka’s family life, headed up by her fearless corporate shark of a mom and her homemaker dad, is just as charming here as in the anime series (if granted slightly less screen time).

MICHELLE: This sounds a bit like Bokurano: Ours, in which middle-school-aged kids are duped into a contract that requires them to destroy aliens and die in the process. I do think, though, that you’ve sold me more on the anime here than on the manga.

MJ: Well, and perhaps I mean to, though I feel a bit bad about it. I have a lot more stake in the manga industry than I do in anime, yet in this case I can’t deny that the manga suffers in comparison. It is still quite interesting, though, and I’m looking forward to the second volume. It really is a very compelling story, regardless of how it’s being consumed.

One little oddity (and this applies to both mediums)— Puella Magi Madoka Magica is a magical girl series that resembles modern series for a male audience much more than a female one. You can easily identify all the usual suspects: the glasses-wearing girl, the spunky girl with fang teeth, the pretty girl with long, black hair, the self-conscious yuri jokes… you could be watching Lucky Star in that respect. This doesn’t detract from the series at all for me, but it definitely gives the series a bit of a male otaku vibe—at least that’s how it reads to me.

MICHELLE: Well, I’ve also read something that’s an adaptation from another medium, though this time it’s from a dating sim for girls! 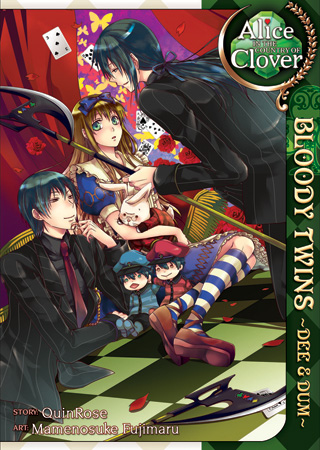 You may recall that I talked about Alice in the Country of Hearts way back in our second ever Off the Shelf column. There, I initially referred to it as “bishie land” then instantly reconsidered, since the plot focused more on the mystery of the world in which the heroine, Alice, found herself than in her myriad romantic prospects. The series was much better than I expected, and I liked it so much that I sought out the sixth volume in Japanese after TOKYOPOP’s demise meant the series would not conclude in English (though it will be released in its entirety by Yen Press this summer).

Alice in the Country of Clover: Bloody Twins is an adaptation (by a different artist) of another game in the series, and though certain elements are reset, it functions fairly well as a sequel. Alice remains in the world that she believes is a dream and has become fairly comfortable there. Nearly every male resident is interested in her, but her constant companions are twin boys “Dee and Dum,” who constantly proclaim their love for her and who like to a) glomp her all the time and b) kill people. A shift in the dream environment moves everyone to the land of Clover, where the twins gain the ability to turn into grown men, whereupon they act the same as ever, causing Alice to get flustered and blush a lot.

This is another case of a series suffering in comparison to something else. Where Alice in the Country of Hearts surpassed my expectations for a manga adapted from a dating sim, Alice in the Country of Clover meets them fairly exactly. There is no focus on the mystery of the world at all. Instead, this reads entirely like a “what if” scenario: what if Alice fell in love with the twins? She’s still a reasonably likeable character, rather embarrassed that she’d dream up such a scenario, but Dee and Dum are so empty as people that it’s disturbing that she’s not disturbed by them. It’s utterly impossible for me to root for this romance, but perhaps I was never intended to, as the short stories rounding out the volume explore different “what if” pairings for Alice.

That said, Alice in the Country of Clover isn’t outright bad. I definitely smiled a few times at the humor, and can see myself checking out the next Clover installment, Cheshire Cat Waltz, which Seven Seas is publishing next month.

MJ: I suppose my feeling here is that you’ve perhaps sold me on Alice in the Country of Hearts rather than on this sequel, which sounds… not bad, but probably not worth prioritizing over better manga.

MICHELLE: And, like you, perhaps I meant to, but I feel bad about it! I definitely hope that people support Seven Seas by checking out the Clover titles. 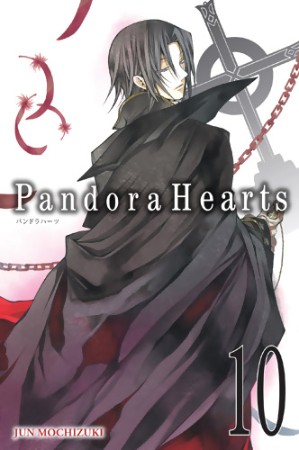 And now… the special request. A few weeks ago, you reviewed the tenth volume of Pandora Hearts in our Bookshelf Briefs column, and we received a comment from Releona, who said she’d like to see it featured in an Off the Shelf column, as she was interested in our thoughts on it in greater detail.

Your wish is our command, Releona!

MJ: Since I’ve already done a review of sorts, would you like to get us up to speed on the series’ plot at this point?

MICHELLE: I’ll take a shot at it, though Pandora Hearts is one of those series that makes sense in the short-term but is not exactly clear in terms of its long-term plot trajectory.

Oz decides that the best bet for restoring Alice’s lost memories would be to visit Sablier, scene of a great tragedy a century before. Separated as they approach the epicenter of the disaster, Oz, Alice, and Gilbert see illusions from the past, each of which introduces some intriguing twists to the story, mostly in the form of answers about how the tragedy came to be. All of this is quite interesting, but mangaka Jun Mochizuki is adept at making the story about the characters, so the most compelling aspects are sympathizing with the character who brought about the tragedy as well as watching Gilbert angst oh-so-prettily about his memories and the possibility of being driven mad by them.

Probably I could read a manga that was all about Gilbert angsting prettily, but it sure was nice to get a little more shape to the story at this point.

MJ: Most readers by now have probably figured out that I’m a big fan of this series, and given that I’ve gone on in rapturous delight about its costuming, it’s probably a given that I’d happily read a whole manga about a prettily angsting Gilbert as well. But I certainly agree that this volume was a balm for the muddled brain. Not only was it a relief to understand Gil’s full history at last, but it also helped me to despise another character much, much less. And really, I wouldn’t have thought that could happen. Though probably I now hate Glen Baskerville much, much more.

Also, though Alice takes a back seat in this volume, the scene in which she confuses a kiss with a bite on the cheek is one of her most charming moments.

MICHELLE: It was, though I was startled to see how very obnoxious she was in the past. She may actually be a better person without her memories, which I’m sure is Mochizuki’s intent. Speaking of nice moments, I was also very happy that Oz actually feeling free to complain about something for the first time was given the significance it deserved. Gil desperately needs to be needed, and Oz still relying on him in a crucial moment brings him back from dangerous thoughts that still seem to be plaguing him, even at the volume’s end.

In addition to Gil’s violent impulses, another thing I’d like to see Mochizuki explore soon is Jack’s relationship to Alice and how much it influences Oz’s feelings towards her. In fact, this ties in to another important reveal in this volume, namely why Jack was consigned to the Abyss to start with.

I suppose my bottom line is, “this volume is not to be missed.” Not that I would advocate missing any of them, really.

MJ: Oh! And another thing that was a fairly big deal in this volume is Oz’s increasing ability to become one with the B-Rabbit. It was frightening, for sure, but pretty interesting.

And yes, I agree. This volume is not to be missed. It’s a substantial payoff for some of the confusion we’ve endured (amidst all the beauty) thus far.

Readers, if you (like Releona) have any special requests for Off the Shelf, feel free to let us know!