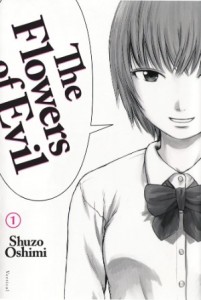 If you grew up in a small town, you probably knew someone like Takao Kasuga, the nebbish-hero of The Flowers of Evil. Kasuga is a precocious middle-schooler who copes with provincial life by burying his nose in a book. His peers tolerate him, but find him a little too smug and strange to be one of the guys. Kasuga, for his part, takes pride in his sophisticated reading habits, stashing poems in his desk and telling his classmates that they’re too stupid to appreciate his favorite writer, Charles Baudelaire.

In a moment of impulse, Kasuga steals the gym outfit of beautiful classmate Nanako Saeki — an act witnessed by Sawa Nakamura, the class outcast. Nakamura confronts Kasuga after school, threatening to expose him as the thief unless he complies with her requests. Her motives for blackmailing Kasuga are complex, a mixture of prurient interest in Kasuga’s sexual fantasies and sadistic delight in wielding power over a boy. At times Nakamura  physically dominates him — she punches and tackles him — and at times she manipulates him with humiliating tasks and questions.

I’d be the first to admit that the similarities between Flowers of Evil and Sundome — however superficial — predisposed me to dislike the book. I didn’t think I had the stomach for another story in which a ball-busting girl sexually and psychologically tortured a sad-sack boy. Yet Flowers of Evil proved a far more compelling and honest look at adolescent sexuality than Sundome, thanks, in large part, to Shuzo Oshimi’s sympathetic portrayal of Kasuga.

Throughout the book, author Shuzo Oshimi hints that Kasuga’s character was inspired by his own experiences as a book-toting misfit. “I read Baudelaire’s Flowers of Evil for the first time in middle school,” he explains at the end of chapter one. “I didn’t understand much of it, but the book’s feel — suspicious, indecent, yet nastily noble — made me think, I’m so cool for reading it.” Kasuga, too, clearly feels a sense of superiority for having discovered Baudelaire at a young age; in a fit of self-pity, he muses, “How many people in this town understand Baudelaire?” At the same time, however, he’s keenly aware that his peers think he’s weird. Kasuga may be mature enough to appreciate Baudelaire — or perhaps, more accurately, to think he understands Baudelaire — but he isn’t quite old enough to shake off his classmates’ teasing.

Oshimi also does an exceptional job of dramatizing Kasuga’s inner sexual turmoil. Early in the book, for example, Kasuga catches sight of Saeki. In a flash, he pictures her clad in gym clothes, blushing and telling him, “I love you.” His acute embarrassment at being discovered mid-reverie is all the more palpable for the way in which he’s drawn: Kasuga sinks into his chair, his shoulders slumped, brows furrowed, and body foreshortened, making him look like a moist ragdoll. In later chapters, Oshimi uses surreal imagery — a wall of eyes, a fun-house mirror, a giant sink hole — to suggest that Kasuga’s normal teenage discomfort with sexual feelings has become something more powerful and destructive: shame.

If Kasuga is a sympathetic character, Nakamura poses greater difficulties for the reader. She claims her true agenda is to expose him as a pervert, but nothing about Kasuga’s behavior indicates that he is; if anything, Kasuga is naive, torn between romantic and sexual ideas about love. (That he calls Saeki “my muse, my femme fatale, my Venus” suggests the extent of his confusion.) Nakamura, too, appears to wrestling with complicated sexual feelings; in several scenes, she hints at her own predilections, only to accuse Kasuga of harboring even nastier ones. In short, Nakamura seems intent on finding someone more self-loathing and sexually confused than she is, yet her behavior is so violent and manipulative it sometimes feels as if Oshimi is trying too hard to suggest her disaffection; Nakamura’s character veers dangerously close to being a symbol of castration anxiety, rather than an emotionally damaged teenage girl.

That said, The Flowers of Evil is a shockingly readable story that vividly — one might even say queasily — evokes the fear and confusion of discovering one’s own sexuality. Recommended.