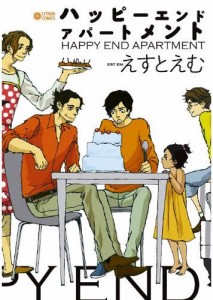 The Apartments of Calle Feliz begins with a scene cribbed from an Audrey Tatou flick. Luca, a struggling writer, has a terrible day: he breaks up with his boyfriend, then fights with his editor, who chastises him for writing “dark” endings. (“Nobody wants to read your sad story during a recession,” he tells Luca.) Desperate for a new place to live, Luca answers an ad in the paper for an apartment on — irony alert! — Calle Feliz (a.k.a. Happy Street), in a building affectionately known as “Final Feliz,” or “Happy End.” Javi, the landlord, offers Luca a couch, rent-free, until Luca can get back on his feet. At Javi’s urging, Luca decides to pen a novel about the other tenants.

Somewhere in the middle of the prologue, my Geiger counter began registering dangerous levels of whimsy: impossible coincidences! unnatural and impulsive behavior! a character who wants to fix other people’s lives! It’s a measure of just how much I like est em that I continued reading; she’s one of a handful of authors I trust to turn such a cutesy premise into a compelling story.

What follows is a series of vignettes about Luca’s new neighbors. In the first story, for example, we meet Dino, a designer, and Salvador, his boyfriend, who are slowly drifting apart, thanks to Salvador’s eccentric behavior: he declines all social invitations, preferring instead to wander around their apartment in the nude. Though they have maintained an uneasy truce for years, an upcoming business trip threatens to destroy their relationship. Dino and Salvador’s inevitable confrontation is heartbreaking; as silly as the plot may be — doesn’t Salvador ever get cold? what about crumbs? — Salvador’s pain is real, as is Dino’s inability to understand Salvador’s unusual strategy for coping with fear of loss and change.

Other stories illustrate similar themes of loss and estrangement. In chapter four, for example, Pepe, a dollmaker, befriends Matias, a lonely teen. Matias has become painfully self-conscious about his voice; once a source of pride, the onset of puberty has lowered and coarsened it, making him ashamed to sing in public. Only his visits to Pepe give him a sense of purpose, as Pepe’s dolls provide Matias an outlet for ventriloquizing his feelings about his mother’s recent death, and about the changes to his voice.

These stories succeed in spite of their art-movie preciousness largely on the strength of est em’s artwork. Like many boys’ love artists, she draws characters with sharp features and lean, angular bodies. est em softens those shapes with energetic, scribbly linework that helps individualize her characters, whether she’s adding a bump to a long nose or deepening the circles under an older man’s eyes. These subtle imperfections help make the characters’ interior states more accessible to the reader, helping us understand how each character inhabits his skin; when Pepe or Dino stares into the distance, we can practically see what they’re thinking. Even when we’re asked to accept an outlandish premise — a man who falls in love with identical twins, a transvestite who lives with a troupe of noisy circus musicians — the characters’ reactions to one another register as true to life; we appreciate the degree to which routine, silence, and complacency erode human connection and exact a toll on the body and spirit.

est em demonstrates a similar talent for resolving her stories in a nuanced fashion. Some endings are sad, some funny; some are surprising, while others seem inevitable. Whatever happens at the end of each story feels right for the characters and their situations, however; there’s never a moment of sitcom cuteness or sentimentality.

So if you can tolerate a bit of forced whimsy, The Apartments of Calle Feliz offers bountiful rewards: elegant artwork, memorable characters, and happy endings that are neither predictable nor pat. Recommended.