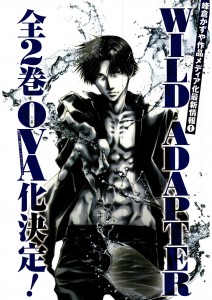 Fans of Kazuya Minekura’s unfinished BL action series Wild Adapter have been holding out hope for years that the series might one day be continued. News last year of its move to Ichijinsha provided a glimmer of real positivity, as it seemed that artistic differences may have been at least partially responsible for the series’ discontinuation, though of course a change in publisher can’t magically resolve the author’s persistent health problems, which have been ongoing since 2004.

Still, we may soon have something to hold us over as we continue to wait and hope. Earlier this week, ANN reported that a video anime has been green-lit, along with a new “vocal CD, a ‘Kubo-Toki’ live concert event, and a new art collection book titled sugar coat excess.”

Several of us here at Manga Bookshelf (specifically Michelle, David, & I) have been vocal fans of this series for some time, and I find myself receiving this news with both excitement and trepidation. On one hand, I would be very, very happy if a new OVA helped to generate new interest in the series, especially from fans who might not have considered checking it out before. I also hope very much that the animated adaptation remains true to the best elements of the manga, and I feel some nervousness on that front.

What say you, readers?