MICHELLE: Now that the obligatory bad joke is out of the way… read any good manga this week? 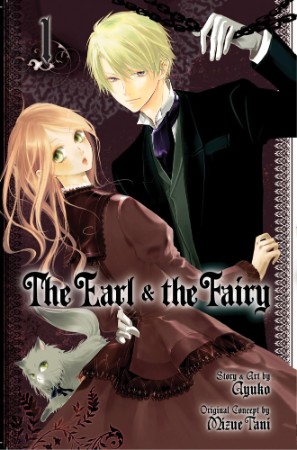 MELINDA: Well, yes… though not exclusively. I started the week with The Earl & the Fairy, a new shoujo title from Viz, based on a light novel series by Mizue Tani, with story and art by the single-named Ayuko.

Our heroine, Lydia, is a “fairy doctor,” which we don’t know much about yet, except that they seem to be humans who can see and communicate with fairies. Thanks to modern (Victorian England) skepticism, fairy doctors are a dying breed, but Lydia learned the craft from her mother and is determined to carry on the tradition, skeptics be damned.

If this sounds like a bit of a mess… well, it is. And though I’ve never been opposed to messy manga, so far, Lydia is too generic a heroine to draw me in on just her own strength. Still, the art is pretty and Lydia’s fairy companion (who looks like a cat) is both cute and grumpy—irresistible qualities in a supernatural pet. So I’ll likely forge on.

MICHELLE: Oh, that’s disappointing. I always hate it when stories seem to have nothing better to do than employ multiple kidnappings. I’m reading a YA series right now with that same problem. But still, a cute and grumpy kitty pretty much guarantees I’ll at least give it a look.

MELINDA: Yeah, the “kitty” really is a pretty great hook, and I suspect you’ll have difficulty resisting it as well.

MICHELLE: Well, like you, I suppose I will start with a title I’ll probably continue with, even though I’m not particularly enthused by it. 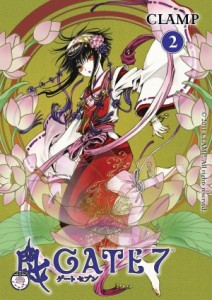 This week, I read volumes one and two of Gate 7, the newest series from manga powerhouse team CLAMP. In a nutshell, meek, spazzy, and Kyoto-obsessed high school student Chikahito Takamoto travels to his favorite city, where he runs into an androgynous kid named Hana and Hana’s two intimidating attendants, who are doing… something in a shrine. Ridding it of evil spirits, perhaps? This is all fairly straightforward so far, but then we find out that they’re employed by a guy who is the reincarnation (maybe?) of an important figure from Japan’s history, that other reincarnations exist, that they all have a blood contract with an oni whose powers they borrow, and that Nobunaga Oda had the most powerful oni and everyone else in the present is trying to get it.

Again, like The Earl & the Fairy, if this sounds like a bit of a mess… that’s because it is. Many elements of the plot are vague. Plus, I feel like I’ve seen so much of it before. Young, androgynous-looking character possessed of great power? Check! Spazzy student who moves in with supernaturally gifted people and proceeds to cook for them? Check! There’s even another nursery school/kindergarten. And the things that make the series somewhat different—all the historical references—just zoom right over my head. More than once they’ll be talking to someone and then there’ll be a full-page close-up during which the person’s identity as a reincarnated historical personage is dramatically revealed. Maybe I’m a dumb American, but I just don’t know who Yukimura Sanada is and it doesn’t mean anything to me when he makes his appearance.

That said, the art is very pretty. I am especially intrigued by Iemitsu Tokugawa, a very lovely bad guy who visually reminds me a bit of Nokoru from CLAMP Campus Detectives. I hate the idea of abandoning a CLAMP series, but this one may have just one more volume to start making more sense.

MELINDA: I’ll admit I have a soft spot for exactly this kind of CLAMP, and you probably recall that Gate 7‘s first volume lured me in pretty well, but by the end of the second volume, I was certainly feeling skeptical. I’ll probably give it a few more volumes (I did say I had a soft spot), but I can’t blame you for feeing discouraged at this point.

MICHELLE: I will say that the notes do a great job of explaining who these people are and their significance both historically and in pop culture, but feeling baffled by dramatic twists is not really much fun.

Anyways, I hope your second read served you better!

MELINDA: It most certainly did, and I know you’ll be happy to hear it! 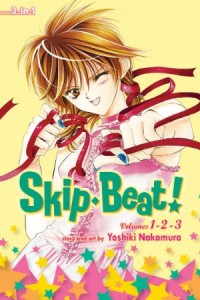 I also spent some time this week with the new Skip Beat! omnibus. It’s a series I’ve been interested in for a while, but the idea of trying to collect it from the beginning so many volumes in just seemed too daunting. Obviously, these new editions are a great opportunity for readers like me to start from scratch. And honestly, I think it was a far more compelling read for me in a three-volume chunk than it ever could have been otherwise.

As pretty much everyone already knows, Skip Beat! tells the story of Kyoko, a sweet, devoted teen who thinks nothing at all of following her childhood crush, Shotaro, to Tokyo (at his behest!), to work her butt off supporting him as he shoots for stardom as a pop singer. Kyoko gives up her own schooling to work multiple jobs in order to pay for Sho’s food and housing, enduring his moodiness and cold demeanor all the way. When she overhears Sho badmouthing her to his (apparently) real show-biz girlfriend, she’s understandably heartbroken. She’s also consumed by the desire for revenge—a motivation that fuels her every action from that point forward. In a bit of cracktastic shoujo plotting, Kyoko inexplicably decides that her only shot at revenge is to become a greater star than Sho is, thus beginning a tireless pursuit of show business success worthy of the likes of Stage Door or 42nd Street. Yes, “the calla lilies are in bloom again…”

I mentioned before that I think this was a better read for me three at a time, and I really think that’s true. Despite Kyoko’s awesomely fierce personality, I’m not sure I would have had the will to move beyond the first (or perhaps second) volume if I’d had to purchase them one at a time. And I think there are probably a couple of reasons for this. First, as a former actor, I deeply disagree with the author’s thoughts on what makes good acting (rather than a desire to be loved by an audience of strangers, I’d argue that it’s actually a willingness to let those strangers see the parts of you that they really might not love, which is much, much harder). Secondly, I really do hate seeing a heroine devote her entire existence to a man, and obviously that’s what Kyoko is doing, at least at this point in the manga.

Fortunately, three volumes was pretty much exactly the amount of time I needed to be completely drawn in by her, so in the end, I’m definitely hooked. I get the idea that she’s going to discover that she’s got real talent of her own, and that there’s more to life than chasing after a dream guy. Bring it on!

MICHELLE: I’m glad you liked it! I don’t want to tell you too much of what’s coming, but you’re absolutely correct: Kyoko will discover she’s got prodigious talent and will start to pursue acting for her own sake and not for revenge. And I, too, had issues with the whole “you have to want to be loved” thing, but I choose to think of it as just another peculiarity of Lory’s and not any big statement. In time, the story will focus more on Kyoko’s jobs with only an occasional return to the Love-Me Section plot line. In fact, Nakamura-sensei starts to use it as a springboard for more crackaliciousness, so it turns out to be handy.

MELINDA: So as to not make too much of my issues with the “love me” thing, I will say that regardless of all that, I really do appreciate the story’s thoughtfulness regarding the extensive damage done to Kyoko’s ability to trust by Sho’s heartless betrayal, and I do think that’s something she’d need to work through in order to be really vulnerable to an audience. So the acting stuff isn’t all a sham. And of course I’m all for crackaliciousness when it’s done right, so I will definitely look forward to that!

So, what else do you have for us this week? 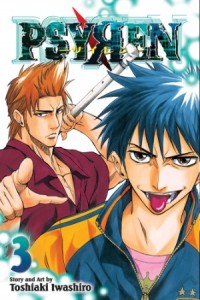 MICHELLE: The third volume of Psyren, a Shonen Jump series from Toshiaki Iwashiro.

At first, I was fairly underwhelmed by this series, in which typical Shonen Jump protagonist Ageha Yoshina becomes involved in a game wherein he and various (and often unwilling) others battle in a harsh realm called Psyren for the sake of the world’s future. In particular, I objected to the haphazard effort Iwashiro had put forth to develop a consistent personality for the female lead, Sakurako.

Happily, by the third volume, the depiction of Sakurako has evened out (and she even gets a couple of major badass moments) and the mystery of Psyren has ramped up. I am a sucker for dystopic science fiction, and I can’t help but love the fact that the third volume is comprised almost entirely of Ageha’s second trip to Psyren and his attempts to navigate the game now that he knows more about it, while simultaneously burdened with a crew of newbies, scarcely developed psionic powers, and a foe that used to be the friend of one of his companions. It feels like a real problem-solving series this way, and the pace at which answers are forthcoming is really satisfying.

I still get a little bit of a Bokurano: Ours vibe from it, but with a real shounen flare that makes it exciting rather than gloomy. I’m actually a little surprised by how much I enjoyed this volume and how avidly I’m looking forward to volume four. If you were turned off by the execution of volume one but at least a little intrigued by the premise, you might want to give the series another chance. I’m glad I did.

MELINDA: I’ll be honest, I haven’t had the slightest interest in this series, but you’re making it sound kind of intriguing. Hmm.

MICHELLE: Well, maybe it’ll eventually make its way to VIZManga.com (where so many of its Shonen Jump brethren are available) and you’ll be able to check it out for half the price.

MELINDA: That would be great!