This month, we’ll take a look at VIZ Media’s new manga for the NOOK Color, as well as a couple of titles from JManga. Device, OS, and browser information is included with each review as appropriate, to let you know exactly how we accessed what we read.

VIZ Manga on the NOOK Color

In last September’s Going Digital column, I wrote about my experience reading manga on a Kindle. The review included such sentiments as “Wow, this looks like crap,” and ended with this pithy observation:

I guess paying $6 for a Kindle edition of a book I didn’t like very much is better than paying $13 for same, but my advice to those considering reading manga on their Kindle is simple: “Don’t.”

So, when I was presented with the opportunity to check out the titles VIZ has made available for NOOK devices, I was quite eager to see how the experience would differ. As it turns out, the NOOK vastly outperforms the Kindle in all areas but one, and that one is not a deal-breaker.

The loaner model NOOK Color I received came pre-loaded with a few VIZ titles, so I can’t comment on the ease of buying and downloading manga from the Barnes and Noble site, but it looks pretty straightforward to me. There’s a WiFi connection on the device, so you can shop directly from the reader, as well. Books are accessible in the Library, which displays a nice gallery of color covers instead of a plain text list of titles. Simply tap the cover of your book of choice to open, and you’re good to go. 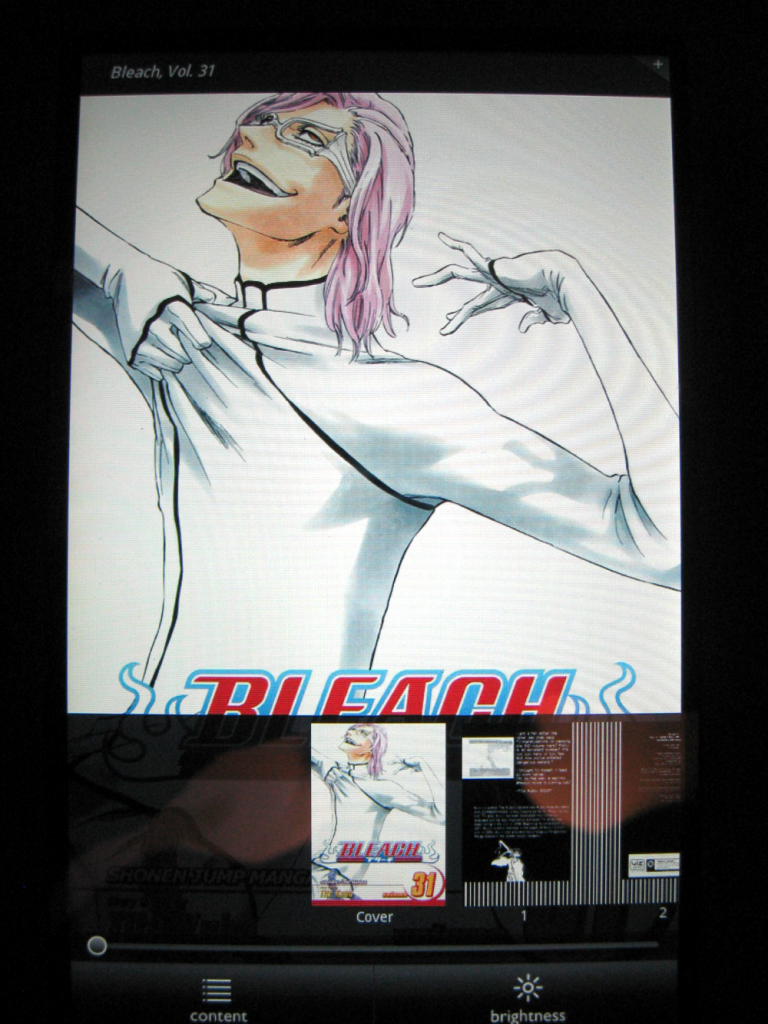 The first offering I perused was volume 31 of Bleach, and when I saw its cover come up full-screen, so crisp and beautiful, I am pretty sure I uttered a “wow” aloud. The inner pages are just as sharp, with clean, white backgrounds and legible text. Navigation is easy—gently tap the right side of the screen for the next page (granted, this is a little counter-intuitive when reading manga, as normally you’d be turning to the left) and the left side for the previous page. Tap the middle and a menu pops up, where one can scroll amongst all the pages in the volume and manage bookmarks, which one sets by pressing the “+” icon in the top right of the screen, creating a little digital “dog-ear” effect on the page.

At this point, I still hadn’t figured out how to zoom—I’m definitely a late adopter where technology is concerned, so there was a bit of a learning curve with touch-screen navigation—so I thought I’d check out some shoujo, which is known for its teensy asides and author-talk sections with small text. I found examples of both on a page of Absolute Boyfriend, and personally found the text legible, but once I discovered the “reverse-pinch method” of zooming in, it was a definite improvement. The screen is larger than the Kindle, so a single page looks pretty good as is. The NOOK’s got an auto-rotate function, which means that the display will shift to landscape mode if you turn the device on its side. This is helpful when you want to enjoy the scope of a two-page layout from an artistic standpoint, but not really practical for reading that way, unless you want to stay zoomed in all the time. 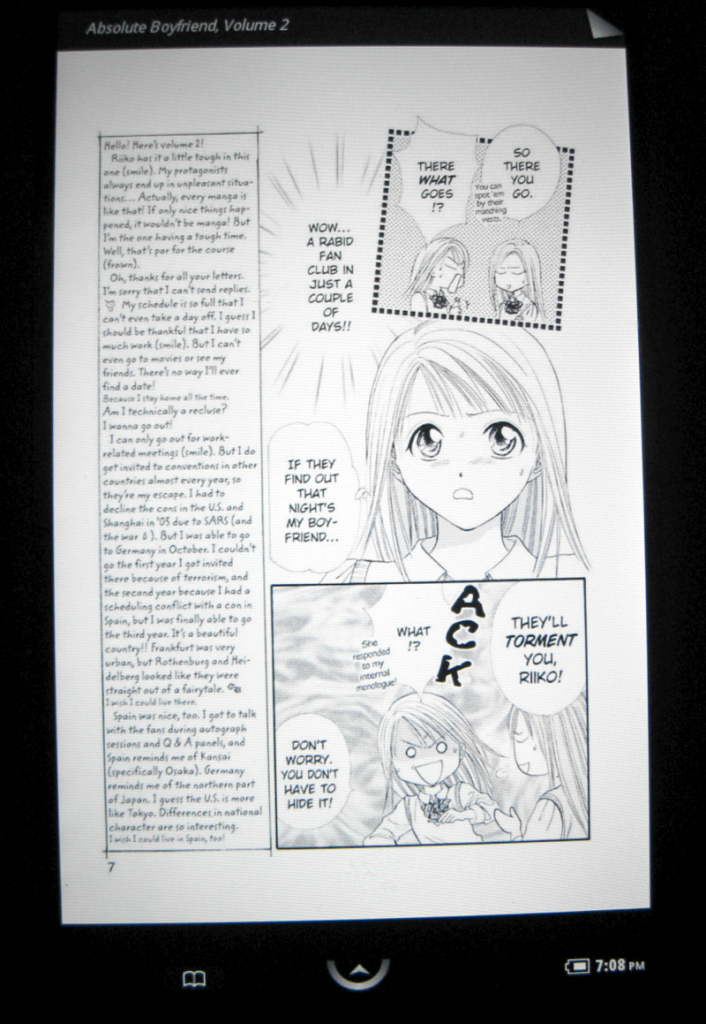 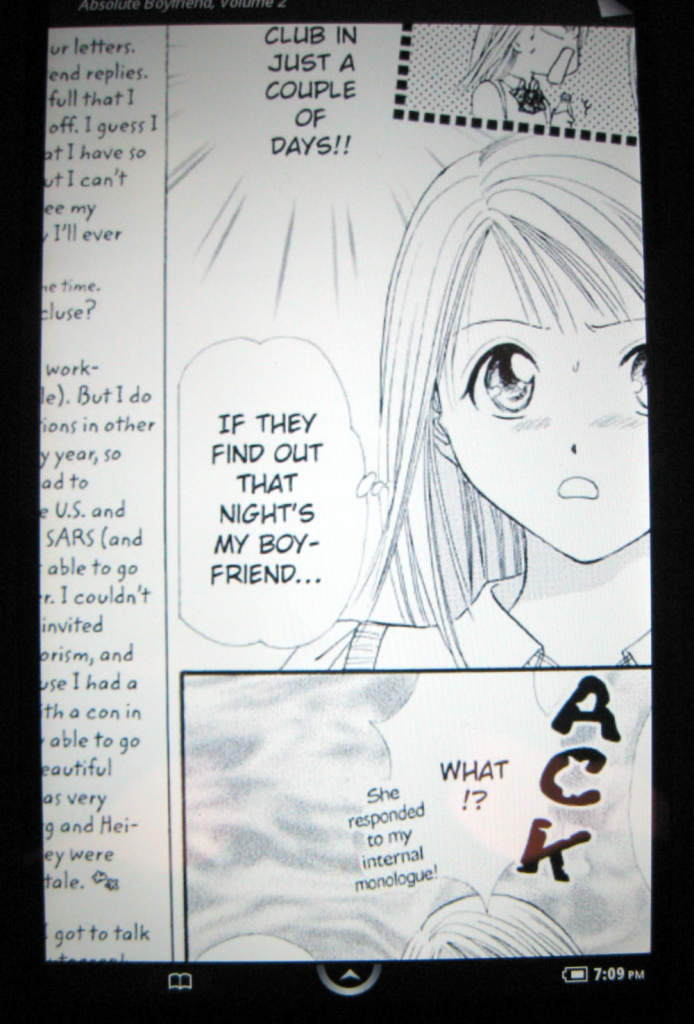 There are only two complaints I have about the NOOK, and one is exceedingly minor. In most respects, the sensitivity of the touch screen is a good thing, but as I held the device, I somehow kept placing my thumb in such a way that caused the system to repeatedly alert me to my lack of new notifications, which was annoying. The second issue is more significant, and that is that the NOOK is pretty heavy. According to Barnes and Noble, the NOOK Color weighs 15.8 ounces, but mine (with protective cover) clocked in at 20.8 ounces, which is equal to three print volumes of manga. Obviously, this is not extremely heavy, and even the fact that the latest Kindle supposedly weighs less than six ounces could not ever induce me to recommend it over the NOOK Color where reading manga is concerned. – Michelle Smith 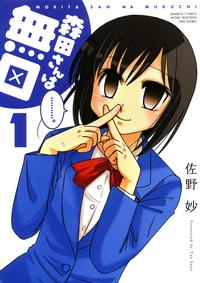 Readers of print manga in North America will be very familiar with the type of manga we get with Morita-san. It’s what’s termed a ‘4-koma’ style manga. Basically the equivalent to American comic strips such as Peanuts or Beetle Bailey, They’re 4 panels, mostly vertical, with quick punchlines and gag humor. Yes, there are the occasional serious 4-koma series, but they are definitely the exception. We;ve seen the high school band series K-On!, the high school eccentrics of Azumanga Daioh, and even spin-offs of popular titles like Haruhi Suzumiya and Shugo Chara.

This series has a lot of the same types of ingredients. With the exception of a token male or two to get one-liners, the cast is almost entirely cute and female. It takes place in a typical high school. There’s no real plot to speak of – we follow our heroine and her friends through the school year, being amused at their comedy antics. However, despite all of this, I found Morita-san to be quite a fun and pleasant experience. It has a very good hook. The heroine, the titular Morita, doesn’t speak. Note that she *can* speak – she just never gets a good opportunity. Either she thinks too long about what to say and everyone moves on, or she gets flustered, or the timing is wrong… as such, she spends the volume as a sort of ‘silent support’.

Her friends, and this is another reason I found this fun, don’t really bring this up or hold it against Morita at all. It’s just a quirk, like her best friend Miki’s being boy-crazy, or Hana’s being shy. They treat her like a good friend, and don’t even mention the silence – they always ask her opinion on things and the like. And Morita herself is a likeable heroine, being nice and sweet without getting overly sappy. (Her parents help here – her mother vacillates wildly between sweet adoring wife and jealous harridan, and it’s noted Morita got her reticence from her upbringing.) There’s even some mild yuri tease here, involving the cool Student Council President who everyone loves, as well as an unnamed girl who keeps trying to stalk… um, strike up a conversation with Morita only to misread whatever situation is going on. If you’re going to read 4-koma, it should be as fun and likeable as this. -Sean Gaffney 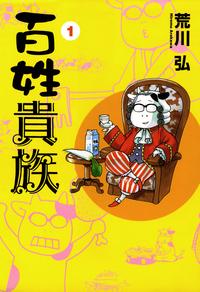 As most Manga Bookshelf readers will already know, I’m a huge fan of Hiromu Arakawa’s epic shounen series Fullmetal Alchemist. In fact, the series even made my personal top ten. I consider Arakawa to be a truly exceptional storyteller, so when I heard that JManga was offering something new from her, I immediately ran over to read it. I was not disappointed in the least.

From the pages of the eccentric shoujo magazine Wings, Hyakusho Kizoku is a series of humor-tinged manga essays detailing life on a Hokkaido dairy farm. Though, on the surface, Hyakusho Kizoku may seem to share little in common with a fantasy epic like Fullmetal Alchemist, fans of FMA will quickly recognize Arakawa’s easy sense of humor, as well as her ability to create compelling, recognizable characters with just a few deft strokes.

The series is openly autobiographical, filled with anecdotes from Arakawa’s childhood and teen years that cover everything from her father’s habit of visiting the cow shed in winter wearing only his underpants, to a bit of light authorial ranting on topics like pesticides, government demands, and why Hokkaido would be better off as an independent country. And though her humor is a highlight, it’s not the only way in which Arakawa shows off her strengths. One particularly haunting lesson about the fate of a sick, newborn calf had me tearing up as I read—a feat achieved mainly through just a few poignant strokes of Arakawa’s pen, as she drew her own mournful, childish face and that of the unsuspecting calf.

If I sound like a hopeless fangirl, well, perhaps I am. But it’s a devotion well-earned by any author who can entertain equally well with action-packed fantasy and facts about cow dung. And fortunately, JManga does their part as well, offering up a clean, readable adaptation that lets the series’ conversational style shine.

While Hyakusho Kizoku may not be every FMA fan’s cup of tea, it certainly is mine. Highly recommended. – Melinda Beasi