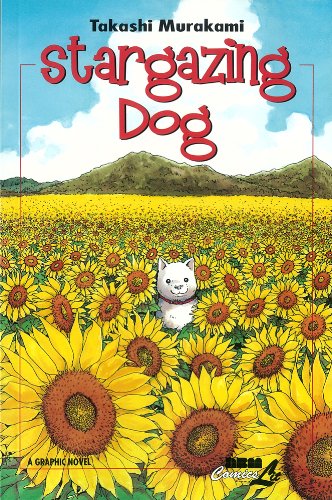 Few things can reduce me to a puddle of tears as quickly as a dog story, especially if the canine subject is lost, abused, or sacrificed for the well-being of his owner. Yet for all my sentimentality, I am particular about my dog stories. Too often, authors allow extreme displays of loyalty or mischievousness to stand in for a thoughtful portrayal of the dog’s own personality; the author is so intent on showing the redemptive power of canine ownership that the ostensible subject of the book feels more like a walking metaphor than an actual presence in the narrative.

Takashi Murakami largely avoids this trap in Stargazing Dog by granting his canine protagonist a voice. In less capable hands, Happie’s narration might be precious or manipulative, prompting the reader to feel unearned sympathy for him. Murakami, however, finds just the right words for Happie, expressing his point of view with a simplicity and directness that seem appropriate for a dog.

Early in Stargazing Dog, Happie forms a strong attachment to a character identified only as “Daddy,” a father who gradually becomes estranged from his wife and teenage daughter. With the dissolution of his family, Daddy packs Happie and a few possessions in his car, and begins driving towards the sea. The outcome of their journey is never in doubt — we learn Happie and Daddy’s fate in the very opening pages of the book — yet Murakami draws the reader into the story with a nuanced depiction of the master-dog relationship. 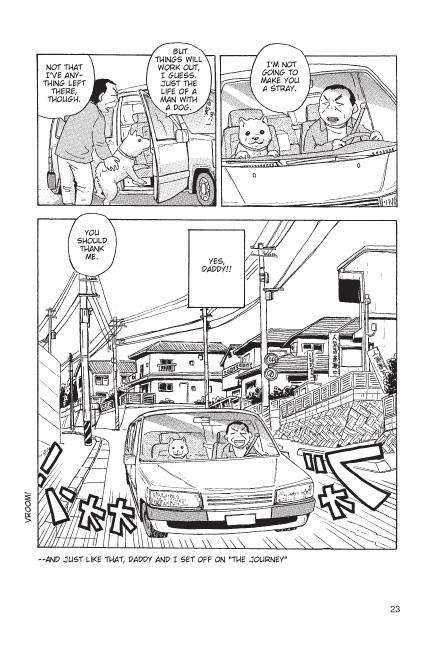 Daddy and Happie take to the road.

Murakami has two fundamental insights into that dynamic. The first is routine: Happie’s devotion to Daddy stems from many hours of walking, sitting, and eating together. These rituals consume Happie’s thoughts until the very end of the story; Happie eagerly anticipates their daily walks, adapting to changes in Daddy’s schedule with heartbreaking alacrity. (“We used to go for a walk in the evening,” Happie observes. “These days, Daddy takes me out in the daytime.”)

The second is communication: though Happie and Daddy clearly share a special emotional connection, there’s a fundamental gap between them that can’t be bridged. Happie never fully grasps what’s happening to him and his master, perceiving the changes in their routine without understanding their cause. Daddy, for his part, never acknowledges the degree to which he views Happie as an extension of himself; as his circumstances deteriorate, he continues to rely on Happie for companionship, putting his own emotional needs before the dog’s.

Murakami never romanticizes Happie and Daddy’s relationship, though he honors the sincerity and warmth of their bond. The roughness of the art — the human characters’ clumsy hands and round heads, the crude use of perspective — further inoculates the story against mawkishness, while the exaggerated facial expressions and child-like rendering of space and objects echo the naivete of Happie’s narration. Only a few poorly chosen fonts and backwards signs mar the design, reminding the reader that the artwork has been flipped for English-speaking audiences.

Perhaps the best compliment I can pay Murakami is to acknowledge just how much Stargazing Dog moved me. Not in a cheap, dog-in-peril sort of way, but in the same way that Vittorio de Sica’s Umberto D. touched me: as a beautiful meditation on the human-canine bond, one that acknowledges the complexity and inequality of that relationship, as well its enduring power. One of 2011’s best new manga.