MELINDA: Well, hello, Michelle! Is it really time for another Manga Moveable Feast?

MICHELLE: It seems like every time I turn around there’s a new one!

MELINDA: Agreed! But when that Feast revolves around the likes of Natsume Ono, I’m not going to complain. So, we’ve each read some Ono this week in preparation for the Feast. Michelle, would you like to begin? 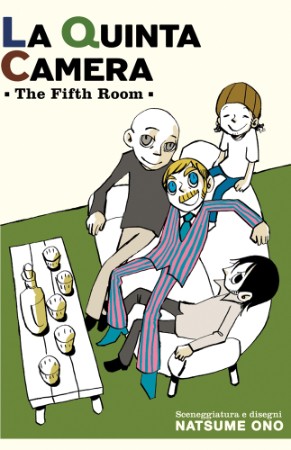 MICHELLE: Sure! It’s been a pretty busy time for me lately and while my tired brain balked at the daunting prospect of getting into Ono’s longer works, her collections of short stories presented an option that I can only describe as “undemanding,” and I mean that in the nicest way.

First, I read La Quinta Camera, which is a series of linked short stories revolving around an apartment in Italy. Four of its rooms are occupied by middle-aged men of incredibly “singular” personalities—Massimo, the landlord, who is nurturing and kind; Luca, the small hippy busker, who is sweet and child-like; Celestino, the short and mustachioed guy, who is annoying yet much-loved; and Al, the truck driver who is either asleep or at work. Massimo routinely takes in exchange students to let the fifth room and, as the story opens, Danish language student Charlotte arrives.

It’s a bit of a surprise when, in chapter two, Charlotte has moved out and been replaced by Alessandro, but this introduces the central gimmick of the book: in each chapter, there’s a new tenant. In a sort of… gentle and vague way, focus shifts amongst the residents during the course of six chapters, during which time Luca finds and loses love, Charlotte offers to have Al’s babies, and Massimo’s girlfriend announces that she’s pregnant, which means everyone must move out.

Objectively, I realize that works like House of Five Leaves are better than La Quinta Camera, but I have to say that I liked it a lot. I just simply like stories where people are nice to each other… where they remember to leave Christmas messages for the lonely Japanese kid left alone in their apartment over the holiday. With its light touch and pleasant feeling, his is the kind of brain balm I sometimes require.

MELINDA: There’s a real warmth to Ono’s short stories that indeed serve as kind of a healing balm, in my view. I don’t see this as being a lesser type of storytelling (even if I tend to prefer something a bit more epic), and it’s especially lovely in Ono’s hands. Sure, love something powerful, but a light touch can often be just what’s needed.

MICHELLE: I think I’m probably just not in the mood for something powerful as often as you are, hence my fondness for less-than-awesome media tie-in fiction. There’s some pressure to be profound when responding to Great Works that one just doesn’t feel when reading a book about Buffy. And so La Quinta Camera performed a similar function for me.

Anyhow, I suspect you have read something a bit more epic this week. 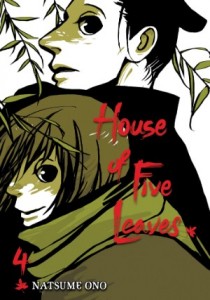 MELINDA: Well, I’m not sure if “epic” is an appropriate word for House of Five Leaves, though it’s long-form storytelling of course. But it’s rather leisurely, really, much like Ono’s shorter works but with expanded opportunity for exploration.

I tried to read volume four a while back, and somehow couldn’t latch on to it. I know now that it must have been me, because there’s a whole lot going on in this volume, and it clicked immediately with me on my second try.

Much of the volume revolves around Ginta, a new sort-of-member taken on reluctantly by the Five Leaves. He’s the cast-off son of a wealthy family who tricks his way into the Leaves, but not without revealing a whole lot more of himself than he intended. We also learn new things about the Leaves’ leader, Yaichi, in this volume, and it’s definitely not pretty.

What makes House of Five Leaves so consistently intriguing, though, is the failed samurai that provides the series’ heart. With Masa at its core, there’s always an odd mingling of warmth and unease running through the story. These feelings are where Masa lives, and one has the sense that this has always been the case. There’s a heartbreaking flashback in this volume, in which we see Masa being basically thrown out of his home for being so ill-suited as a samurai. Yet it’s hard to imagine exactly what he should be. He’s all ambiguity (and a little self-loathing), and certainly not a hero, yet it’s impossible not to care for him, and it’s obvious that Ono does.

I’ve loved this series from the beginning, and it’s only become more dear to me over time. It’s probably my favorite of Ono’s work, and that’s saying quite a lot. I look forward to the next volume.

MICHELLE: I read and loved the first volume, but when I recently attempted to read volume two (with a goal of catching up on the series) I had a similar experience in which it just failed to engage me somehow. With Ono’s short stories I found that having a dedicated amount of time to just sit and consume them in one sitting was ideal, so perhaps that’s where I went wrong with Five Leaves. I’ve definitely not given up on the series.

MELINDA: I’m glad you haven’t given up. It really is one of my favorite currently-running series.

So, speaking of Ono’s short stories, we both read Tesoro this week, just released from Viz. Want to talk about that a bit? 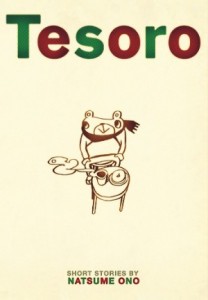 Tesoro (the Italian word for “treasure”) is a collection of fourteen stories by Natsume Ono. The earliest works were published as doujinshi, while more recent stories appeared in IKKI. Unlike La Quinta Camera, the stories here are not overtly serialized, though there are some recurring characters and common themes (like curmudgeonly guys who really love their wives).

For the most part, though, the stories seem to be short expressions of ideas that don’t go very far in developing the characters. Some stories are whimsical—the introductory piece, for example, consists entirely of a bear taking the bus to get some donuts then going home again—while some are more serious, like the story of an orphaned girl who sees a potential father in every famous man of whom she becomes aware. It’s an intriguing concept, and one can definitely see seeds of Ono’s eventual storytelling abilities, but it’s lacking the warmth that imbued even the loose-limbed La Quinta Camera with touching moments.

I definitely enjoyed it, don’t get me wrong. But I think it would be more enjoyable to those already familiar with Ono rather than for those who are wondering who she is and what the fuss is all about.

MELINDA: I agree, though, like you, I certainly enjoyed Tesoro. One of my favorite stories in the volume was “senzo titolo #3,” about a father taking his young son to see his estranged father for the first time. There’s a lot packed into this little story–apprehension, excitement, some lingering resentment–all without ever actually seeing the grandfather ourselves. It’s a little glimpse of Ono at her best. There are a lot of moments like that here.

I think you’re absolutely right, though. This is a collection for fans to linger over, rather than an effective introduction to the author.

Did you have a favorite story?

MICHELLE: Oh, I loved “senzo titolo #3” because I loved how the dad started singing the Coke jingle in public and the kid was embarrassed. :) I thought that was a nice little true-to-life moment.

I think my favorite is “Moyashi Couple” (or “bean sprout” couple), because the husband is seen as a grouch by the neighbors but once he learns the neighbors think he and his wife don’t get along, he makes sure that they go out and about in public to disprove that notion. There’s a really nice line in it about the neighbors being able to tell that he’s actually kind because, though he usually walks in an impatient swagger, when he’s with his wife he automatically assumes a more leisurely pace so as to be able to walk beside her. Maybe I’m just a sucker for crusty guys with hearts of gold, but I think that’s the story I won’t forget from this collection.

MELINDA: I liked that too, and probably for similar reasons. I was also fond of “The Frooms,” about a boy with two domineering older sisters, whose dad tries (and fails miserably) to equalize things. It’s funny and poignant all at once. Poor dad!

MICHELLE: Oh yes, I love how that poor dad is just flabbergasted that his big plan to give his son a dazzling gift is derailed.

It occurs to me that these are like drabbles. Little ideas that suggest what a longer extrapolation on the theme could be like without actually, y’know, extrapolating.

MELINDA: That’s an excellent point, Michelle! They do indeed have the same, wispy quality. This is what a real “slice of life” looks like.

MELINDA: So while I’d be more likely to hand a new reader something like Ristorante Paradiso, Tesoro really is a treat for Ono’s existing fans.

Read more about the work of Natsume Ono at this month’s Manga Moveable Feast, hosted by Manga Widget’s Alex Hoffman.