Digital distribution was the primary thread running through announcements from manga publishers at this year’s New York Comic Con, but it wasn’t the only thing to get excited about. For detailed coverage of each day’s panels, be sure to spend some time with Sean’s write-ups of Friday, Saturday, and Sunday. Below is a list of highlights from attending manga publishers (Note: neither Dark Horse nor Bandai Entertainment offered any new manga announcements). 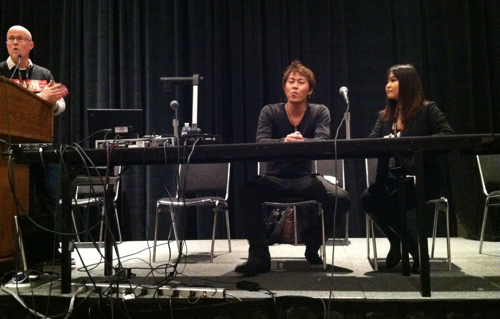 With visiting mangaka Hiro Mashima in attendance, much of Kodansha’s panel time was spent letting him woo the crowd with his charming personality and artistic skill. Happily, they offered a wealth of new manga announcements as well. Here’s the rundown:

Attack on Titan – “Humanity has been devastated by the bizarre, giant humanoids known as the Titans. Little is known about where they came from or why they are bent on consuming humanity. Seemingly unintelligent, they have roamed the world killing off humankind for years. For the past century, what’s left of mankind has hidden in a giant, three-walled city. People believe their 100-meter-high walls will protect them from the Titans, which are 10 to 20 meters tall. But the sudden appearance of an immense Titan is about to change everything.” (June, 2012)

Genshiken Omnibus – “Welcome to the world of the Genshiken, home of the true otaku – the Japanese term for ubergeek. This is the story of a group of friends who are all members of the most hardcore anime and manga fan club in all of Tokyo – and the girls who love them.” (May, 2012)

Kitchen Princess Omnibus – “Najika has always known how to cook. She understands food, and how it touches people’s hearts. But she herself has always been looking for more. When she was a child, she met a boy who touched her heart, and now Najika has set out to find this boy. The only clue she has is a silver spoon that leads to the prestigious Seika Academy. Fitting in at Seika will be a challenge. Every kid in Najika’s class has a special talent, and the girls at the school think Najika’s not worthy. But Sora and Daichi, two popular brothers who barely speak to each other, recognize Najika’s cooking for what it is — magical. Is either boy Najika’s mysterious prince? ” (June, 2012)

Kodansha Comics iPad App – Kodansha Comics joins the digital revolution with their own iPad app, which launched officially during the convention. We’ll have a full review in our next edition of Going Digital, but in the meantime, here’s the pitch: “Kodansha USA Publishing is proud to announce the debut of the Kodansha Comics app, appearing at midnight tonight in the iTunes store. The app was created by Random House, Inc.’s digital content team on behalf of Kodansha, a Random House Publisher Services division client. It will be free to download, with most volumes priced for sale at $4.99. The Kodansha Comics iPad app will launch with 34 books covering four series: Arisa by Natsumi Ando; Fairy Tail by Hiro Mashima; Sayonara, Zetsubou-Sensei by Koji Kumeta; and Until the Full Moon by Sanami Matoh. Additional series will be added to the app in the near future.”

Be sure to check out their special launch promotion, featuring all fifteen volumes of Hiro Mashima’s Fairy Tail for $2.99 each. 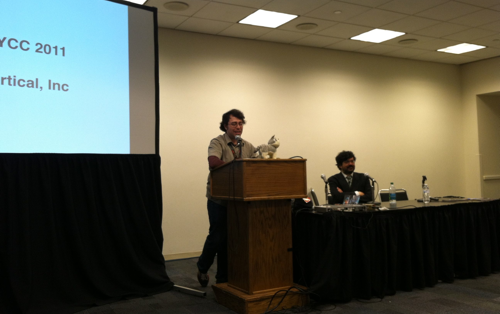 Vertical may still be lagging digitally, but they announced several exciting new licenses for 2012.

5 Centimeters Per Second – Adapted from Makoto Shinkai’s anime feature, this stands out as my favorite surprise license of the convention. When I first watched this film, all I wanted to do when it ended was to start it all over again. This story of separation and loneliness may be a bit messier than Shinkai’s earlier, similarly-themed Voices of a Distant Star, but it affected me more personally.

The first of the movie’s three sections hit me the hardest, and I wrote of it at the time, “The second and third chapters resonate deeply with me too… but it is the first I keep coming back to. It is Takaki’s journey on the train that stays with me constantly. I feel that I could watch this film over and over and it would never become tired to me.” Whether the manga adaptation is as strong remains to be seen, but it ran in Kodansha’s Afternoon, which speaks well for it indeed. (June 2012)

Sakuran – There has been twitter speculation about this license for a while, and it’s exciting to see the speculation become real! I’ll let David speak for me here. “Now, how did I go through all those license requests without ever hitting upon Moyoco (Hataraki Man) Anno’s Sakuran? Looking back, the one-volume title from Kodansha’s Evening received only a scant mention in The Seinen Alphabet. Let’s pretend that I’ve been begging for it all along, because it certainly feels like a request fulfilled.” (July, 2012)

Message to Adolph – Having come into the world of manga so late, it’s a pleasure to see publishers recently re-issuing manga I missed the first time around, especially when that manga was written by the likes of Osamu Tezuka. Originally published here by Viz (as Adolph), it has been long out of print. Now, Vertical adds this tale of three Adolphs to their impressive Tezuka library. (August, 2012) 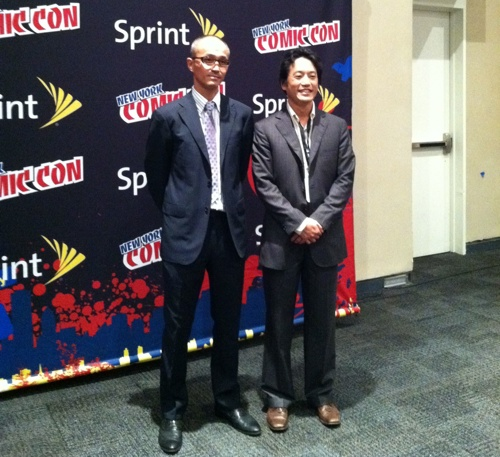 Viz made the trek from the west coast this year for the first time in a while, bringing with them a number of announcements, including these licenses:

Loveless – Though I’ve never read Loveless, a popular series from Yun Kouga—already a favorite of mine—it’s apparently time to start. Viz has picked up the license where TOKYOPOP left off, starting with volume nine. As Sean says in his Day Three post, “This title runs in Ichijinsha’s Comic Zero-Sum, and is another of those ‘not quite BL but has many BL elements’ series. It’s still running in Japan, and I think fans will be excited about this.” No word at this time about whether Viz might re-release the earlier volumes at any point. (June, 2012)

Jiu Jiu – From the pages of Hana to Yume, Jiu Jiu is the story of a girl who comes from a family of demon hunters and the two werewolves who protect her. This looks to be set in high school, which wasn’t what I expected when reading the initial setup. Sounds like fun! (July, 2012)

For details on all of Viz’s NYCC announcements, manga or otherwise, check out Brigid Alverson’s coverage at MTV Geek.

Now for the really big news…

Weekly Shonen Jump Alpha – Certainly one of the biggest manga revelations at the con, Weekly Shonen Jump Alpha is “a weekly serial anthology of some of the most popular manga series in the world: Bakuman｡, Bleach, Naruto, Nura: Rise of the Yokai Clan, One Piece, and Toriko. The first issue of Weekly SJ Alpha goes on sale January 30, 2012, and will be available through VIZManga.com and the VIZ Manga apps for iPhone™, iPod™ touch and iPad™.” These chapters will be coming out just two weeks after publication in Japan. To catch fans up, Viz will be launching what they’re referring to as the “digital warp,” “a limited collection of digital graphic novel speed-ups that will bring North American readers up-to-date with Japanese releases.” 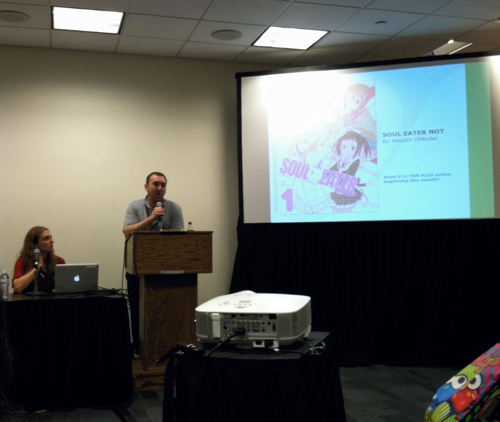 In addition to a couple of new manga-style adaptations (Cassandra Clare’s Infernal Devices and Sherrilyn Kenyon’s Dark-Hunters: Infinity), Yen Press made a splash with these license announcements.

Alice in the Country of Hearts – In another valiant license rescue, Yen Press picks up this popular series, to be released in quick succession. From Yen’s official announcement: “Take heart, Alice fans! Yen Press will be releasing the COMPLETE Alice in the Country of Hearts series in June 2012 as three omnibus editions each collecting two volumes of the original series!”

Puella Magi Madoka Magica – “Madoka had always thought magic was the stuff of her dreams…until she encounters an unreal cat-being at her totally normal school! The cat offers her a choice — Will Madoka become a Puella Magi in exchange for her dearest desire?”

Until Death Do Us Part – “Haruka is a young girl with precognitive abilities that allow her to predict the future with incredible accuracy. Unfortunately, these powers have made her a target for greedy corporations. Haruka uses her power to seek the one who can offer her protection, singling out Mamoru Hijikata, a blind man whose inability to see belies his skill with a sword!”

The Disappearance of Nagato Yuki-chan – “This spin-off takes place in the world of the “Disappearance” arc of the Haruhi Suzumiya novels, focusing on the high school life (and romance!) of a tentative and bashful Yuki Nagato quite unlike the one you’ve come to know and love through the usual exploits of the SOS Brigade…but no less charming!”

Soul Eater Not – Though this Soul Eater side-story might seem like a no-brainer for Yen, the real meat of this announcement is in its distribution. Following in the footsteps of its predecessor, Soul Eater Not will be serialized digitally in Yen Plus, but released simultaneously with chapters in Japan. Serialization begins in this month’s edition, and access is available worldwide.