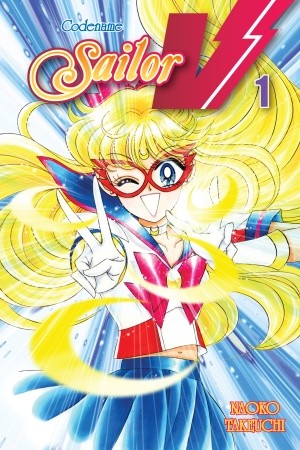 Do you remember Wonder Woman? From an adult perspective, the show was dreadful, marred by ham-fisted scripts, low-budget special effects, campy plotlines, and wooden performances. From a child’s perspective, however, Wonder Woman was magical: the heroine had a secret identity, wore a cool crime-fighting outfit complete with nifty, crime-fighting accessories, and fought bad buys. Better still, she could transform from civilian to superhero by extending her arms and twirling a few times, a transformation made even more dramatic by a blinding flash of light and a musical flourish on the soundtrack.

Codename: Sailor V irresistibly reminded me of the old Wonder Woman show. Judged by adult standards, it’s repetitive, hokey, and poorly drawn; judged by a child’s standards, however, it’s an appealing fantasy in which an ordinary girl can assume a new, powerful identity in order to defeat bullies, robbers, and aliens who like to impersonate idols. (More on that in a minute.)

Sailor V follows a well-established shojo template in which a seemingly ordinary girl discovers her true identity as a soldier, priestess, or princess. For perky tomboy Minako Aino, her alter ego is Sailor Venus, a glamorous, sailor-suited warrior tasked with protecting the Earth from the Dark Agency, a nefarious band of aliens using the entertainment industry to enslave humanity. With the aid of Artemis, a talking cat, Minako begins mastering her two secret weapons: a magical pen and a crescent-shaped compact, both of which enable her to overwhelm opponents with the light of truth.

What distinguishes Sailor V from other magical girl manga is Minako’s can-do spirit. Minako may flunk math quizzes and miss homeroom, but when the fate of the Earth hangs in the balance, she embraces her responsibility with cheerful resolve. “I feel liberated! I’m overflowing with power!” she declares after her first successful mission. Even when the missions fall into a predictable pattern, Minako’s enthusiasm and competence prove irresistible: she delivers high-flying kicks with graceful precision, discovers new powers in the heat of battle, scolds evil-doers for evading the tax code (no, really), and experiments with different personae. (In one story, she transforms into a handsome male idol; in another, she poses as a military commando.)

Put simply, Minako kicks butt and has fun doing it.

I’m less enthusiastic about the artwork, which is a riot of busy screentones, arm-flapping chibis, and noseless characters. The visual flow is often choppy, with abrupt shifts in perspective and setting that can disorient the reader. The character designs, too, leave something to be desired, as the villains all have blank, doll-like faces and enormous foreheads, while Minako and her friends have saucer-shaped eyes. Only the fight scenes are well executed; using undulating lines and balletic poses, Takeuchi does a fine job of distinguishing Minako from Sailor V, showing us how a plucky teen transforms into a strong young woman.

And therein lies the key Codename: Sailor V‘s appeal: the series allows young girls to try on a grown-up persona, to imagine what it might be to like to be a strong, smart, and capable woman who’s free to realize her full potential. At the same time, however, Sailor V honors a young girl’s ideas of femininity, recognizing that it’s perfectly possible to save the day while wearing a cute outfit. Small wonder, then, that the Sailor Moon franchise proved so popular among young girls on both sides of the Pacific: who wouldn’t want to be a princess and a warrior?