MICHELLE: It is extremely nice down here! Long-sleeve-shirt weather at the most.

MICHELLE: Don’t feel too bad; at least you’ve got takoyaki. Fat chance of ever finding that down here!

MELINDA: I will cling to fried octopus as the one virtue of my region. So, read any manga this week? With or without takoyaki? 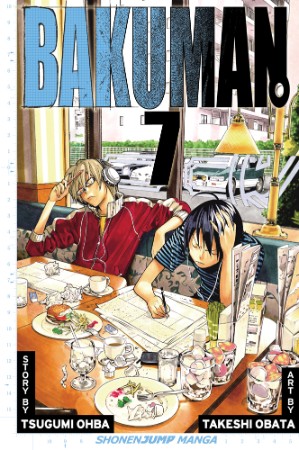 MICHELLE: I read a fair bit, but it was takoyaki-free. This included volumes six and seven of Bakuman。, a series about two boys’ quest to achieve manga stardom that I seem to enjoy more and more with each installment.

In volume six, Moritaka Mashiro and Akito Takagi are working hard on their manga series when Mashiro suddenly collapses. His ailment is treatable but requires three months in the hospital, during which time their series goes on hiatus. Pretty much this entire volume is people arguing whether Mashiro should be allowed to draw while in the hospital, then whether the terms for the series coming off hiatus are fair. Mashiro eventually regains his health, but in the beginning of volume seven, they receive the bad news that the hiatus has dealt a blow to the popularity of their series and it has been canceled. Dubious about the advice they’re getting from their editor, the boys dive into the process of getting a second series serialized. This volume is mostly full of arguments about which one they want to do, what their editor wants them to do, etc.

And you know what? It’s all awesome. I love that Bakuman。 is able to achieve such dramatic tension over concepts like “What if the series that gets the go-ahead is not the one they really want to do?” or “Is Mashiro actually right to insist on a serious story? Is their editor right? Or is he incompetent?” I suppose these might not sound like riveting plots to some, but they kept me turning pages like a mad fiend and when I finished I wished there were more, which brings Bakuman。 into the elite company of series like Slam Dunk, which leave me actively pining for another volume.

The characters have also matured a great deal, both intellectually and physically, which is something this series has in common with another title with art by Takeshi Obata, the much-loved Hikaru no Go. Their attitudes toward women are much different now, for example, and I especially like how Takagi is now so candid about how much he values his girlfriend Miyoshi’s advice and includes her in everything that’s going on. Mashiro, meanwhile, is getting somewhat feistier, and if I had a nickel for every time the antics of kooky rival/friend Eiji Nizuma made me smile fondly, I could at least afford a taco.

MELINDA: I really enjoyed this volume as well. I wasn’t as keen on the subplot with Aoki and possible girl complications for Takagi, but in a way this is a positive sign. It’s taken me a while to care a lot about Takagi and Mashiro’s fates as artists (instead of gravitating towards supporting characters), but that’s what I was focused on here. I love the conflict with their editor, and I can’t wait to see how their final decision pans out.

MICHELLE: Y’know, one of the critiques Eiji tosses off about their work is that the characters they create lack heart, and I think that in some respects Mashiro and Takagi did, too, at first. Now I’m beginning to see them more as fully realized characters and that makes all the difference. 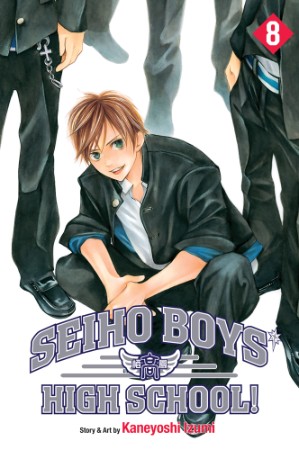 MELINDA: Well, I started off my week with the final volume of Kaneyoshi Izumi’s Seiho Boys’ High School! This was, in fact, my pick of the week, and there are a number of reasons why.

The focus of this volume is Maki’s relationship with Erika, which is on the rocks, particularly as Maki begins to suspect that she’s seeing Kamiki on the side. This kind of thing is nothing new in shoujo (or anywhere else), but what’s really refreshing is the way it all plays out. Nothing is as simple as it seems, and love can’t possibly conquer all, especially for two kids just barely figuring out who they are. Most high school romance tends to pretend like young love is forever, and those that don’t usually lean towards either intense cynicism or melodramatic angst.

Seiho goes in none of these directions. It acknowledges the inherent transience of most teen romances while really giving the characters their due. Maki and Erika are both hurting and both wrong, but they’ve got real futures in front of them, with or without each other.

This series really has been a surprise from start to finish. Originally, it was fresh, funny, and surprisingly candid about the true personalities of teen boys. It’s still those things, but also it’s become really poignant, in the manner of some of the best recent shoujo, like Sand Chronicles and We Were There. I wish it was a bit longer, so we could see what happens when Maki gets out of school, but ending here does make this a nice, relatively short series.

The extra story included at the end of the book is less my cup of tea, so I was pretty sad to realize that it would take up a full quarter of the volume. But it’s not like I would have gotten more Seiho without it, so I can handle the disappointment.

MICHELLE: I have been terribly remiss regarding Seiho, but there just came a point where six of the eight volumes were already out and I figured, “Might as well wait.” Seeing it compared to such standouts as Sand Chronicles and We Were There makes me even more eager to experience it. I really adore strong, subtle shoujo like this that manages to transcend all those shoujo clichés without ever once sacrificing its essential shoujoness.

MELINDA: I do too, and I didn’t really expect that in Seiho. The series was really a surprise. 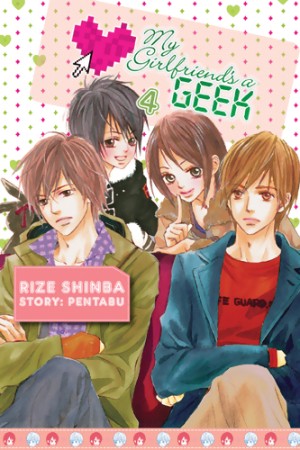 So, we’ve both read the next selection, and given your opinion of the first three volumes, which I think was a bit different than mine, I’m pretty interested to see what you think of volume four of My Girlfriend’s a Geek. Wanna hit us with a quick summary?

MICHELLE: I’ll do my best!

So, college student Taiga has been dating his fujoshi girlfriend Yuiko for a while now and has gotten to know her well enough to realize that she will immerse herself in scandalous BL fantasies if he tells her he’s begun to tutor a middle-school boy who embodies the very definition of an uke. So, he keeps this quiet, and the evasions plus his distance while he works to get into his desired program at school finally prompts some genuine response from Yuiko’s part. They have a long-overdue conversation in which Taiga is able to get some things off his chest, and finally it seems like there may be some genuine hope for their relationship.

What I most wanted from the first three volumes was to see Yuiko and Taiga really engage each other, for Yuiko to seem fully present in the real world, and we finally get that here. Her attempts to get Taiga’s attention, when all she’s doing is irritating him by distracting him from her studies, were extremely sympathetic, and I felt I was finally getting a glimpse at her perspective of their relationship. I had previously read it like she was going overboard with her fujoshi tendencies, but now I realize that she’s just been teasing him half the time, hoping to get an amusing rise out of him. Okay, this still isn’t much fun for Taiga, but it helps me to understand her.

MELINDA: I think I enjoyed the first three volumes more than you did, or maybe just as someone who has been heavily involved in a similar type of fandom as Yuiko, I could relate to it all on some level. What was missing for me, though, was some sense of what they really meant to each other—that they were really boyfriend and girlfriend—and I finally feel like I got that here. With both of them feeling insecure in the relationship but also anxious to save it, I finally feel like I really know where they stand with each other.

I think where we may not quite see eye-to-eye here, though, is on what Taiga gets from the relationship. I appreciated that he actually *said* in this volume that he found indulging her whims “kind of fun” because, honestly, it’s felt like that to me from the start. Sure, he complains about it all, but he gets genuinely caught up in it sometimes, and I can’t help but feel that he wouldn’t keep up with it all if he didn’t enjoy being pushed into her fantasies a bit. And I’m glad to see that in him, because it’s a lot more interesting than a story about a guy who just has what we might expect to be typical straight boy reactions to everything she does. It makes the relationship feel more real to me, too.

MICHELLE: I see that in Taiga now, but I interpreted his behavior in earlier volumes as sort of… mollifying Yuiko because he wanted to have a hot older girlfriend. He wasn’t repulsed, but he was puzzled and overwhelmed by her fervor. Now, though, it seems more like he really gets Yuiko as a person. I love the scene near the end where he’s studying and she compliments him—possibly for the first time without a personal agenda—and he reveals he’s working on the BL novel for her again. How her face lights up! It’s not as if I would ever expect her to not be herself, but it seems like she’s going to take her friend’s example to heart and really appreciate having found a guy who’s willing to actively indulge her.

What it boils down to is that they just make a lot more sense to me now as a couple. I look forward to the final volume!

MELINDA: I agree, I’m really looking forward to the final volume, and I may even wish there were more! I’m interested in digging into the novels as well. My original expectations for this series were very low, and it has easily exceeded them.

MICHELLE: I was originally more interested in the novels, but having seen the excerpt at the end of the first manga volume, now I’m not so sure. The Taiga equivalent seems awfully spazzy.

I should note here, too, that mangaka Rize Shinba’s BL manga is also enjoyable. You and I have reviewed Intriguing Secrets and My Bad for BL Bookrack with favorable results.

MELINDA: Well, you know me, I’ve never had a problem with “spazzy.” And yes, I do recall that we’ve enjoyed Shinba’s BL. I guess she’s probably got some personal insight to offer to these adaptations.