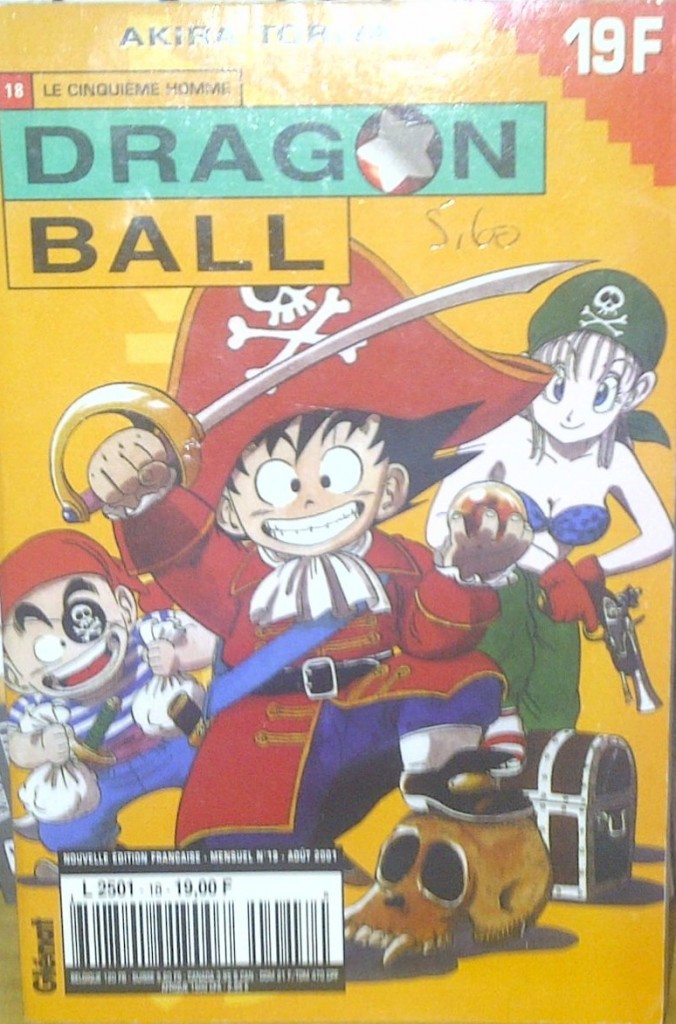 Welcome to the third installment of Show Us Your Stuff, now back at The Manga Critic! If you missed Daniella Orihuela-Griber’s contribution, click here. I’ve also created an archive for this feature here at The Manga Critic, which you can access from the “Features” menu or by clicking here. Today’s contributor is Derek Bown, a writer, student, and shonen manga enthusiast who runs the review site Burning Lizard Studios. Without further ado, here’s Derek in his own words.

Hey, I’m Derek, sometimes known as Burning Lizard. I run an anime, manga, and anything-that-catches-my-fancy review blog. I’m an avid reader and collector of manga, and in the past few years my manga collection has doubled several times. (Especially since the Borders liquidation.) I figured that since I’m like every collector out there: I’m just not satisfied unless I show my collection off to someone. So here you go internet, here is my manga collection.

What was your first manga?
Either One Piece or Ranma 1/2. Both were series that I originally experienced as anime. After my local TV stations started airing only reruns, I turned to the manga to get the rest of the story — which turned out to be crucial for One Piece, since there was an actual story to continue. Ranma 1/2 just managed to both entertain and piss me off towards the later volumes.

Who is your favorite manga-ka?
It’s hard for me to make decisions like this. My tastes change, and my favorite anything is whatever I am consuming at the time. It even depends on the day. Ask me on a Wednesday and I’ll say Oda. Or ask me on a Thursday, and I’ll say Tamura. Fridays or Saturdays you might hear Oba and Obata, or Mashima. 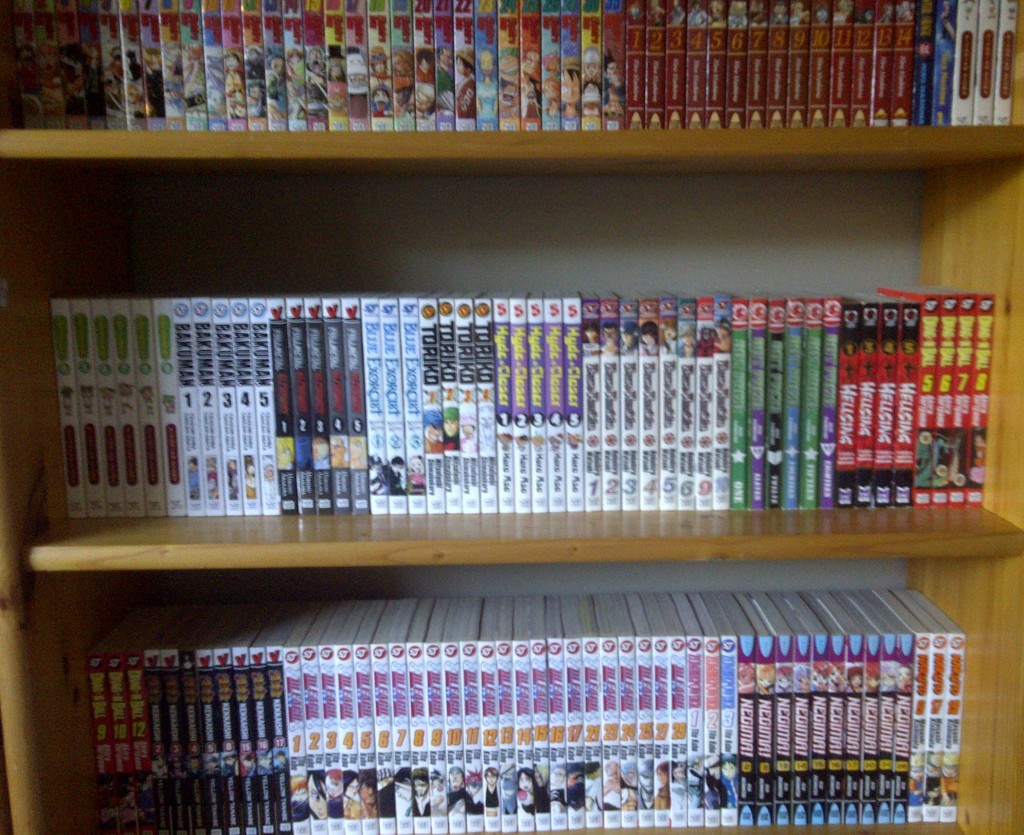 I’ll go with Takashi Shiina, mostly because he is underrated and not highly represented in the west. Or at least not where I live, I hear Ghost Sweeper Mikami is really popular in South America. I rank manga based on comedy, and Shiina is one of my favorite comedic manga-ka, who also manages to take two characters with practically no likable qualities and make me fall in love with them. And I don’t have any of his manga in my collection because his stuff isn’t licensed! Come on! The anime is licensed, bring the manga over! I’ll buy it!

How long have you been collecting manga?
If you count the few volumes of One Piece, Ranma 1/2, and Dragon Ball I bought years ago, then about ten years. But I only started collecting manga seriously about three years ago, a.k.a. around the time I had disposable income. Unfortunately those times have passed.

What is your favorite series?
One Piece. No contest. There never will be any contest. I may be fickle about my current tastes, but I will always be a One Piece fan. Which makes you wonder why I didn’t chose Oda for my favorite manga-ka. To which I say, Oda has yet to make multiple series that I love. 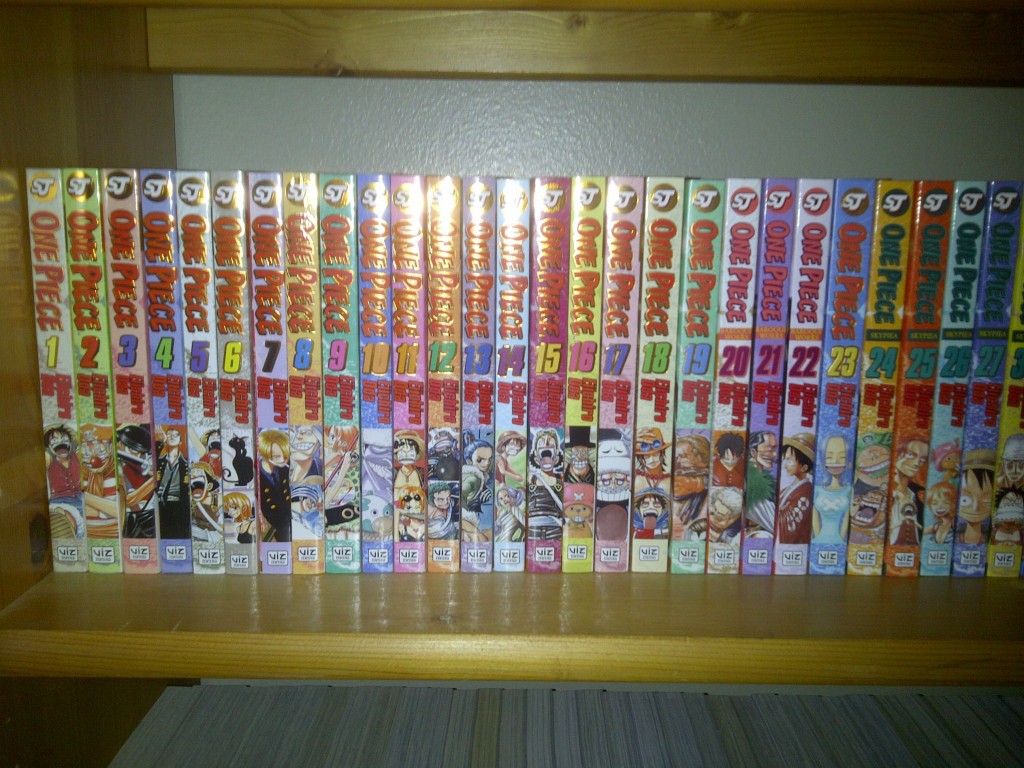 Ghost Sweeper Mikami is a close runner-up, competing with many other series for that spot (though I have to try really hard to ignore the abrupt ending). For now the true number two will remain Fairy Tail, until Mashima does something to piss me off. Which I hope he doesn’t, since I really do love his sense of humor and characters. Though his storytelling could use some work.

How big is your collection?
You’re making me count? Sigh. Fine… One hundred and ninety four. 194. …my collection is lacking. And that’s counting the omnibus editions as their individual volumes. I feel like such a noob…

What is the rarest item in your collection?
I don’t have much as far as really rare manga goes, since right now I’m still in the stage of buying whatever I like that is readily available. But if I had to give an answer, I’d say a monthly French edition of Dragon Ball — not so much for value, but more for the fact that you can’t get a hold of it in the States. I’m going to add my three German copies of Ranma 1/2, as well as three French copies. And my two French copies of the last two Dragon Ball volumes. I know I had more but they got lost during a move, as did my German copies of One Piece. (I’m particularly pissed about losing those.)

What is the weirdest item in your collection?
The first volume of AX. I can’t help but look at the stories in that thing and wonder what I’m even looking at. There are some weird, weird stories in that anthology. 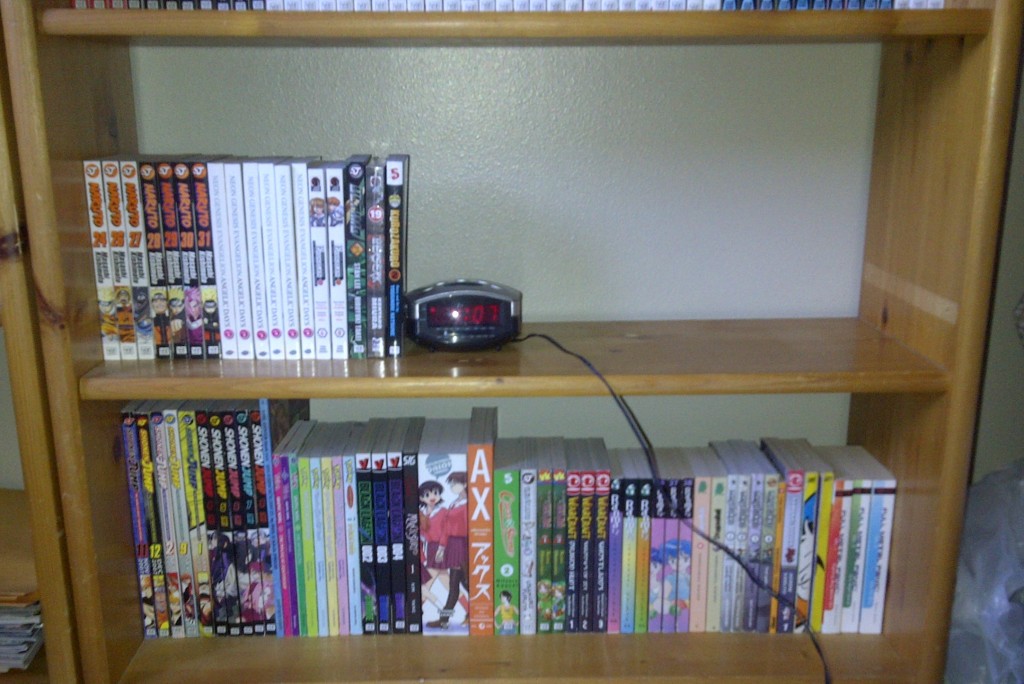 Do you have any organizational tips you want to share with other readers?
I don’t know if anyone wants to imitate this, but the way I organize my manga is by how much I like a specific series or author. I mostly organize by series, but I do group manga by the same creator next to each other. I tend to keep oddly sized manga on a separate shelf, along with manga I either only have one volume of, or no other place for.