Welcome to the September installment of BL Bookrack! This month, Melinda and Michelle take a look at three offerings from Digital Manga Publishing’s Juné imprint, An Even More Beautiful Lie, Only Serious About You, and Private Teacher. 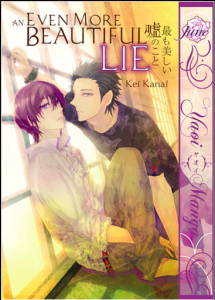 An Even More Beautiful Lie | By Kei Kanai | Digital Manga Publishing/Juné | Rated YA (16+) – It was an impulsive decision on Kurosu Keiichiro’s part to attend Teio Art University, but he believes that meeting genius painter Yukari Yohito proves that it was the right choice. Kurosu is in awe of Yukari’s works, and when he spots the other boy sleeping on the train and about to miss his station, he wakes him up and makes sure he doesn’t forget his umbrella, at the cost of forgetting his own and getting left behind by the train.

This leads to an offer from enigmatic Yukari to spend the night at his place, after which Kurosu comes around more often, making sure Yukari remembers to eat and bathe. Yukari is so completely obsessed with painting that he doesn’t “have any time to think about today, tomorrow, how to live.” Gradually they grow closer, even though Yukari insists that he’d never be able to care for someone more than he does painting. When his home and studio is randomly invaded by thieves, however, and Kurosu gets seriously hurt while single-handedly subduing the culprits, Yukari is unable to paint at all until his friend is fully recovered and discharged. Once he assures himself that Kurosu is fine and will stay by his side, he is finally able to start creating again. Theirs is a quirky love story, and an interesting one.

On the negative side, the narrative occasionally feels disjointed and self-consciously “artsy,” thanks to some obtuse dialogue (“Excessive bias makes me stop thinking about the essential nature of things”) and abrupt flashbacks which, while they provide useful information about characters’ motivations, also require flipping back a few pages to figure out where and when they’re supposed to occur. This issue pales in comparison to the true head-scratcher of the volume, however—the scene in which one of Yukari’s attackers engages in a brief daydream about raping his victim. It’s tonally dissonant, completely gratuitous, and takes one out of the story. I’d still recommend An Even More Beautiful Lie, but it’s too bad the mangaka (assuming it wasn’t an editorial mandate) found it necessary to include that scene. 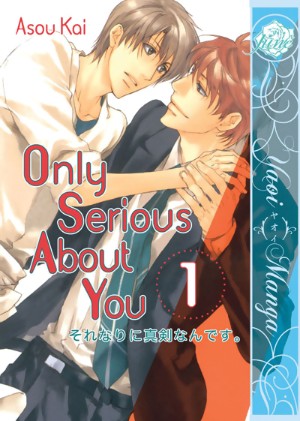 Only Serious About You | By Kai Asou | Digital Manga Publishing/Juné | Rated YA (16+)- Nao Oosawa is a busy guy. Juggling a demanding restaurant job and life as a single dad, he’s barely keeping his head above water. So when his daughter comes down with a fever, Oosawa can’t possibly turn down help, even when the offer comes from an overly-familiar customer, Yoshioka, who never stops flirting. Having observed Yoshioka’s endless stream of boyfriends, Oosawa’s got him pegged as a pretty careless guy, but as Yoshioka becomes more a part of Oosawa’s life, things start to look a bit different.

There’s a lot about this manga that looks like the same-old, same-old—the “straight,” serious uke, the playboy with a heart of gold, the double helping of hurt/comfort—not the worst of the genre’s overused tropes, perhaps, but gratingly familiar (much like Yoshioka). Fortunately, these bits of cliché are fleshed out with a level of warmth and thoughtfulness generally associated with the very best romance.

Both Oosawa and Yoshioka’s characters have been crafted with real care, and from authentic human stuff. They’ve both got baggage, which is neither easy to let go of or the sum of who they are. Oosawa’s holding his little family together, running between home, work, and daycare (fans of Yumi Unita’s Bunny Drop will sigh adoringly), completely devoted to his daughter even as he worries that she might be happier without him. And Yoshioka’s a mess, but the kind of mess that manages to prop up everyone around him when it looks like they might fall.

Asou’s got it right on the romantic front too, even with the straight guy and the somewhat contrived means of throwing the characters together. She builds the relationship slowly on a surprisingly solid foundation, and even by the end of this first volume, all she’s really shown us is the evolution of a friendship. Sure, we’ve yet to see how she handles Oosawa’s realization that he’s fallen for a man, but given the series’ maturity so far, I’ll give her the benefit of the doubt.

Artwork is the least exciting element of this series, but in some ways that may be for the best. It’s always refreshing to read a BL manga where character design feels unimportant, and that’s certainly the case here. The designs are serviceable and the visual storytelling is competent, but Asou gets the most mileage out of dialogue and a handful of very expressive visual moments.

Overall, Only Serious About You is exactly the kind of BL I hope to see much more of. Now how to get by until the release of volume two? 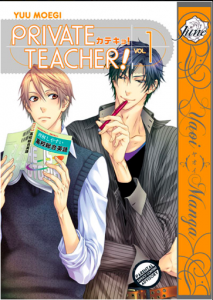 Now, I have no objection to pure pornography, but I’ll admit that it’s not what I was hoping for from this manga (there’s seriously another volume of this?). More importantly, however, it is simply Not For Me. Not only is this manga obsessed with its age gap (this is even more pronounced in the book’s second story, where the characters are younger), but also with obsessive love, which is not at all my cup of tea, at least not when it’s presented with such uncomplicated romanticism.

In each of the three stories in Private Teacher (seriously, the main story only lasts three chapters, and there is still a second volume?) the driving force behind the relationships is jealous obsession. “I get jealous when you laugh and talk with anyone but me.” That’s a frequently expressed sentiment in this manga, and it’s always received with love and gratitude. The message being delivered is loud and clear. Isn’t it wonderful to have someone feel so possessive of you? Aren’t you happy that someone wants to own you?

As I said, this manga is really Not For Me. Your mileage may vary.