Welcome to Going Digital, a new, monthly feature focusing on manga available for digital viewing or download. On the first weekend of each month, the Manga Bookshelf bloggers will review comics we’ve read on our computers, phones, or tablet devices, to give readers a taste of what’s out there, old and new, and how well it works in digital form.

This month, we take a look at manga published for viewing on the iPad, Kindle, and web browser. Device, OS, and browser information is included with each review as appropriate, to let you know exactly how we accessed what we read. 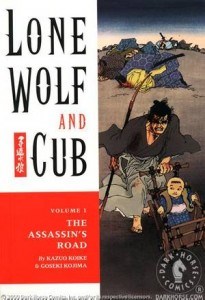 Lone Wolf and Cub, Vol. 1 | By Kazuo Koike and Goseki Kojima | Dark Horse App | iPad 2, iOS 4.3 – Reading comics on a tablet adds a whole new decision-making category. In the old days, there were simply comics you wanted to read enough to own and comics you didn’t. (I say this as someone who isn’t fortunate to live near a library with a large selection of comics.) Now, with a number of publisher-specific applications, there’s a new subset: comics one might like to read, assuming they didn’t have to kill a tree to do it, which can be purchased for less than the cost of a physical copy.

Lone Wolf and Cub is sort of the perfect inaugural for me in this category. It’s a very accomplished work, one that arguably belongs in a theoretical canon of licensed manga, but its subject matter doesn’t speak specifically to me as a reader. I enjoy reading the comic and find the variations on its episodic core – accomplished killer uses a baby in his murder-for-hire work – very clever and perversely funny, but I don’t necessarily want a whole shelf of volumes staring down at me. It’s great pulp, which isn’t something I want to read often or read repeatedly, but it’s something I can enjoy occasionally on a rainy weekend afternoon.

Koike does a splendid job coming up with scenarios that call for the specific, almost superhuman skills of his assassin protagonist. Koike also throws in some marvelous use of the assassin’s toddler companion; he’s a spooky little presence, and Koike invites the reader to wonder just how aware the kid is of how he’s being used. Kojima does absolute justice to the material, from evocative period details to energetically staged violence to ostensibly adorable little kids. Kojima makes it all happen in a seemingly effortless and fluid way, which is just what this kind of material demands.

I know a lot of people view this title as a classic, and it might be slightly sacrilegious to view it as an amusing diversion, but that’s my response, and it’s the reason I’ll keep it in mind when making manga purchases on my tablet. — David Welsh 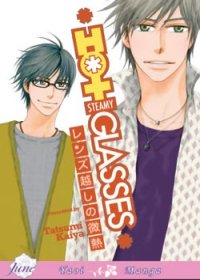 Hot Steamy Glasses | By Tatsumi Kaiya | Digital Manga Publishing | Kindle (3rd Generation) – Like many Americans, I got a Kindle last Christmas. One of the first purchases I made for the device was Hot Steamy Glasses, a BL title from DMP. Here is a dramatic reenactment of what happened next:

“The book downloads onto the Kindle. Michelle opens it. “Wow, this looks like crap,” she thinks. “I shall hit this button that resizes text.” Nothing. “I shall try zooming.” Teensy improvement ensues. “Well, so much for that, then.”

I never bought another manga for the Kindle after that, and I never read Hot Steamy Glasses, either, until now.

While it’s absolutely true that there is no real way to enlarge the text and that it is pretty durn small, it’s still readable and I got used to it after a while. It’s not a comfortable experience, though. It’s also impossible to offer any kind of art critique if you’re reading manga on the Kindle; as opposed to the crisp black-and-white pages you’d get at VIZManga, for example, on a Kindle everything is just sorta blurry and grey. On the plus side, at least I can sit on my couch and read.

Hot Steamy Glasses itself is oddly mediocre. It isn’t bad, but it’s pretty shallow and unconvincing in its portrayal of a determinedly straight guy (Fumiaki) who finally admits that he reciprocates the feelings that his long-time friend (Takeo) has been confessing for ages. There are some amusing things about it—once Fumiaki finally agrees to go out with Takeo, they spend their first five weekends sitting around watching anime, and it turns out that Takeo’s ideas about “going out” are incredibly pure. But I just never really bought Fumiaki’s sudden transformation, and kept expecting Takeo to end up with Fumiaki’s much nicer younger brother instead.

I guess paying $6 for a Kindle edition of a book I didn’t like very much is better than paying $13 for same, but my advice to those considering reading manga on their Kindle is simple: “Don’t.” – Michelle Smith 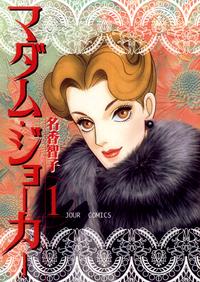 Madame Joker, Vol. 1 | By Naka Tomoko | Futubasha/JManga | OSX 10.6.7, Firefox 5.0 – As a woman of a certain age, I’m temperamentally predisposed to liking stories about women who are smart and confident but not in their first blush of youth. So when I read the description of Naka Tomoko’s Madame Joker, I knew I had to read it:

“Ranko Gekkouji; a woman, a widow, blessed with wealth, with beauty, and with adorable children. Everyone is jealous of her gorgeousness, the envy towards her countless. But, that won’t stop Ranko as she fearlessly solves cases!”

Alas, the execution isn’t quite as fabulous as the summary. Though Ranko is a brash, memorable character, the script suffers from a bad case of obviousness. Ranko’s family members spend a lot of time telling each other how they’re related and explaining Ranko’s behavior, though even the least attentive reader could deduce these things for herself. The description, too, makes Ranko sound like Jessica Fletcher’s spry, sexy daughter-in-law, when in fact Ranko is more of a clever meddler than a Miss Marple-in-training, derailing a two-timing novelist’s career and thwarting a hostess’ scheme to marry for money. And the artwork! “Hot mess” is being kind.

For all its clumsiness, however, Madame Joker scores points with its strong cast of female characters. Ranko and her mother-in-law are both appealingly frank, discussing men, sex, and money with a salty candor that’s hilarious; neither seems the least bit concerned with appearances, either, doing and saying what they please, even when it scandalizes the men of the household. It’s a stretch to call Madame Joker a female empowerment fantasy — Ranko’s power, after all, comes from being a beautiful, rich widow, not a surgeon, police officer, or mother — but it’s fun to see a forty-something women get to enjoy traditionally male privileges. – Katherine Dacey 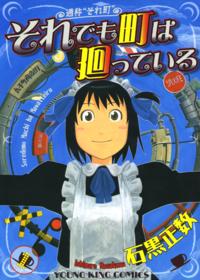 Soredemo Machi wa Mawatteiru, Vol. 1 | By Masakazu Ishiguro. | Shonen Gahosha/JManga | Windows XP, Firefox 6.0.1 – I had recommended this Young King OURS title when we were discussing JManga, mostly for the virtue of being a title that was a) available and b) not from Futabasha or Leed, as I didn’t want to be too biased towards one publisher after my prior Futabasha reviews. JManga seems to be pushing it hard as well, having it be #1 on their list of ‘100 unpublished in NA manga’ on the site. Unfortunately, the manga doesn’t quite live up to the hype.

It’s not actively bad, and certainly good for a chuckle, but seeing this comedic take on a cafe, and the life of the plucky yet dense heroine, Hotori, who works there as a maid, I was reminded that most of the slice-of-life we see here these days tends to be 4-koma style. This has regular 16-17 page chapters, and as such I think I was expecting more forward plot and character development than there ended up being. There does seem to be a bit of a plot hook in Hotori being a mystery addict; in fact, the best chapter was one where she actually got to be clever, deducing a mystery about a 4-eyed painting.

Unfortunately, most of the volume is more about watching goofy Hotori do dumb things. The translation is decent – there were a few parts that even seemed to be adapted with an English reader in mind (Hotori worries about PETA after trying to capture a tailless cat), but overall there wasn’t quite enough here to make me hungry for future volumes. — Sean Gaffney 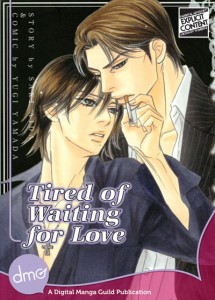 Tired Of Waiting For Love | By Saki Aida & Yugi Yamada | Digital Manga Guild/eManga | Mac OS 10.7.1, Safari 5.1 – Kyousuke Sawaragi has been sentenced to five years in prison for dealing drugs for his yakuza boss. There, he meets Sone, a violent yakuza from a rival group, and his prison plaything, Shuuya. Though reluctant to get mixed up with either, Sawaragi finds himself protecting Shuuya and even becoming his cellmate, though he carefully resists Shuuya’s grateful advances. Once released from prison, Sawagari sheds his former life and devotes himself to the care of his widower brother-in-law and young nephew, but his past comes back to haunt him when he discovers Shuuya collapsed on the street.

This one-shot is significant as the first release from Digital Manga Publishing’s Digital Manga Guild, a new initiative intended to harness the talent and enthusiasm of fan translators, editors, and letterers in order to publish more manga in English without the prohibitive up-front costs associated with traditional licensing. Whether the DMG system is fair to its localizing teams or healthy for the industry as a whole is a conversation for another day, but what’s clear from the initiative’s first release is that it is capable of producing work roughly on par with DMP’s more conventionally localized works.

Kimiko Kotani, the one-woman localization team behind Tired of Waiting for Love, is clearly competent, though she does have her awkward moments when it comes to English prose. Sentences like “I have always lived my life the way that I wanted to live but the water that I was led to drink that should have been sweet, was always bitter,” cry out plaintively for editorial attention to punctuation and flow. Fortunately, these instances are few, and Kotani ultimately offers up a product that is clear, readable, and vastly more professional-looking than much of DMP’s other digital-only venture—its Harlequin Manga line.

It helps, of course, that the material is strong, particularly for a BL one-shot. Author Saki Aida and artist Yugi Yamada have crafted a touching, visually expressive tale that manages to maintain emotional believability within what is essentially a fantasy setting. And though the story never strays away from familiar BL territory, it’s consistently engaging.

All-in-all, Tired of Waiting for Love is a promising debut for both Kotani and the Digital Manga Guild. – Melinda Beasi

Some reviews based on digital copies provided by the publisher.