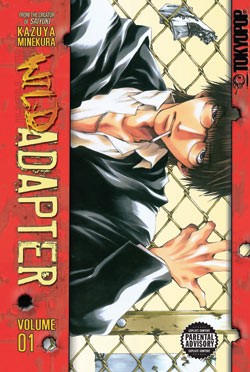 MJ: So, Michelle, first of all, welcome to Manga Bookshelf! I must say, it feels like you’ve always been here.

MICHELLE: Probably because I have! I’m like the houseguest that wouldn’t leave.

MJ: No, you’re the houseguest we kidnapped and brainwashed as one of our own!

We’re thrilled to have you here as a permanent resident, and what better way to kick things off than to put out the call for this month’s Manga Moveable Feast featuring Kazuya Minekura’s Wild Adapter, a series beloved by us both!

MICHELLE: Oh, is that what happened? I’m a little fuzzy on the details. Must be the chloroform.

In truth, I am very happy to officially be part of the family, and delighted that this coincides with a celebration of Wild Adapter!

MJ: For those who are unfamiliar, Wild Adapter (from the creator of Saiyuki) is the story of a young yakuza who becomes involved in the investigation of a mysterious drug known as “W.A.” which turns people who take it into beasts. The series runs in a BL magazine, but there is no more overt BL content than you’d find in a series like Banana Fish. In fact, I often recommend it to fans of that series. That said, similar to Banana Fish, one of the series’ greatest draws is the relationship between the main character and another young man—a victim of W.A. whom he finds collapsed in the street. For people who don’t typically read BL, it’s an unusual example of the genre with broad appeal. It’s also told in an unsusual and effective style, with many chapters set from the POV of a side character. You can check out my review of volumes 2-6 for an overview, as well as some sample pages from the series. David described in on Twitter as, “an incredibly sly, sexy book that combines crime noir with BL goofiness,” which is as good a description as any.

So, the details! Michelle and I will be hosting the Feast here at Manga Bookshelf beginning on Sunday, June 19th through Saturday the 25th. We’ll post an introduction to the series to start, with a roundtable to follow later in the week, as well as a special edition of Let’s Get Visual and whatever else we can come up with. But of course, the real feast comes from you!

MICHELLE: It’s kind of like a potluck in that respect! If you’d like to contribute to the feast, all you need to do is… well, do it! Then send an email to either melinda@mangabookshelf.com or swanjun@gmail.com and we will make sure your contribution becomes part of the official archive!

MJ: No blog? No problem! Just send one of us an e-mail with your contribution included and we’ll post it on your behalf! You may discuss this title any way that pleases you—reviews, essays, comparisons, character studies—whatever you’d like to share. If you have questions, feel free to ask us. You can also join the Feast’s Google Group to mingle with other participants and find out anything you need to know.

MICHELLE: Personally, I’d love to see someone express their appreciation of Wild Adapter through interpretive dance!

So join us on June 19th for the Manga Moveable Feast and Wild Adapter!