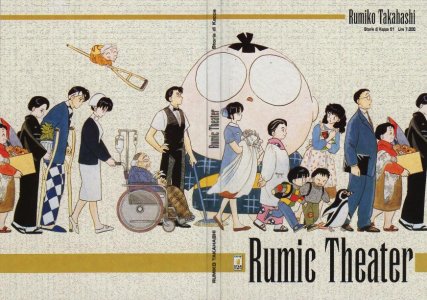 Most American readers know Rumiko Takahashi through her work in Shonen Sunday, but Takahashi has a foot in the seinen world as well. Maison Ikkoku ran in Big Comic Spirits from 1980-87, alongside Area 88 and Wounded Man, while short stories such as “To Grandmother’s House We Go” and “One Hundred Years of Love” appeared in Big Comic Spirits‘ sister publication Big Comic Original. In Japan, Takahashi’s seinen shorts have been collected into four volumes: 1 or W, The Tragedy of P, The Executive’s Dog, and Red Bouquet. Here in the US, however, only two have been translated into English: The Tragedy of P, which was re-titled Rumic Theater (1996), and 1 or W, which was published as Rumic Theater: One or Double (1998). (N.B. One or Double includes a handful of shonen and josei stories that appeared in Shonen Sunday and Petit Flower, respectively.)

These two translated volumes showcase Takahashi’s ability to work in almost genre. There are sports comedies (“The Grandfather of All Baseball Games”), domestic dramas (“Hidden in the Pottery,” “House of Garbage,” “The Tragedy of P”), rom-coms (“The Merchant of Romance,” “The Diet Goddess”), pop-culture spoofs (“Shake Your Buddha”), and ghost stories (“To Grandmother’s House We Go,” “One or Double”). As with Takahashi’s work in Shonen Sunday, many of these stories fold supernatural elements into everyday situations. In “Extra-Large Size Happiness,” for example, a woman’s relationship with her mother-in-law is strained by the sudden and frequent appearance of a household spirit that only she can see, while in “Reserved Seat,” a ghostly grandma takes possession of her grandson’s body so that she can honor her season tickets at the Takarazuka Revue.

Takahashi is a master at establishing her premise in just a few pages, allowing plenty of room for character development and broad comedy without compromising narrative momentum. One of the reasons Takahashi can be so economical is that she invests even the smallest moments with telling detail, making sure that every aspect of a character’s behavior is consistent with the story’s premise. In “Excuse Me for Being a Dog,” for example, the hero — who turns into a shiba inu whenever he suffers a nosebleed — acts like a canine even in his human form: he investigates an abandoned book bag with his nose, curls his lip at strangers, and recoils in the presence of pungent odors. Takahashi doesn’t make a big deal of these behavioral tics, but their inclusion in the story elevates Shiro’s condition from a wacky plot contrivance to a fundamental aspect of his existence. (OK, it’s also a wacky plot contrivance.) 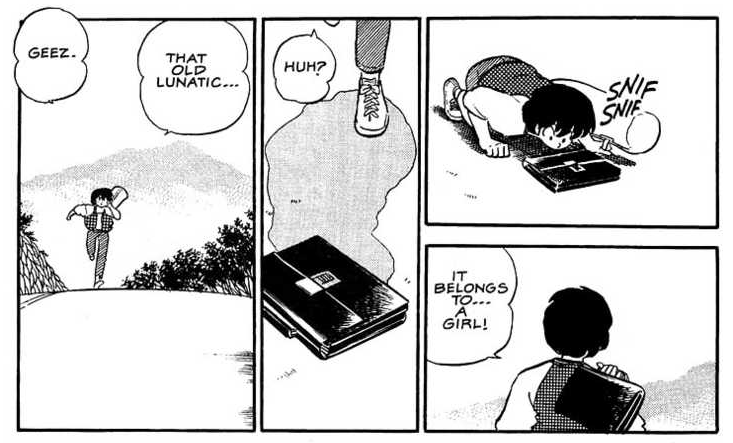 Takahashi’s deep affection for her characters also contributes to the stories’ success. Though they bicker and tease and goad one another, the characters’ good will and mutual affection is seldom in question, even when their judgment is. Takahashi is as generous with her least sympathetic characters as she is with her leads, allowing them moments of wisdom and decency that often challenge the other characters’ perception of them. In “The Story of P,” for example, a man agrees to care for his eccentric client’s pet penguin, despite the fact the Hagas’ apartment complex doesn’t allow pets. For most of the story, Mrs. Haga plays cat-and-mouse with her neighbor Mrs. Kakei, the head of tenants’ association and a reputed animal hater. (Mrs. Kakei keeps tabs on the other tenants, notifying the management of any pet violations.) Yet in the last pages of the story, we learn that Mrs. Kakei has complicated, emotional reasons for ratting out her neighbors that stem, in part, from a genuine concern for animal welfare and not a humorless love of rules.

Art-wise, Takahashi produces some of the cleanest, most accessible layouts in manga. Her characters’ faces are easy to read, and her scenes are staged for maximum clarity and emotional impact; no one times a scare or a punch line better than Takahashi. Even more striking is the sense of mischief and play that informs her artwork. The elderly heroine of “One Hundred Years of Love,” for example, gains the ability to fly after surviving a near-death experience. Takahashi draws the old woman astride an enormous crutch, soaring over an urban landscape. At first, Mrs. Hoshino mutters about the weather, but soon she embraces the possibilities of flight, buzzing an unsuspecting eight-year-old apartment dweller: 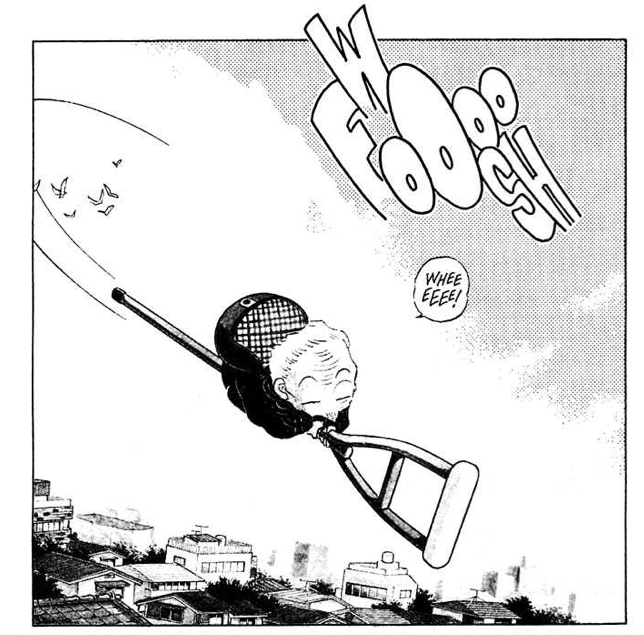 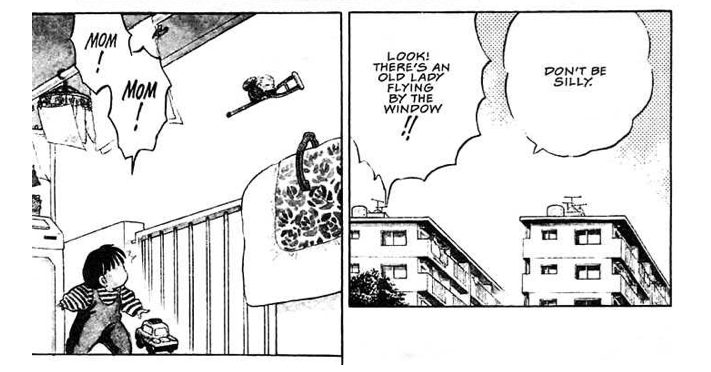 That same sense of mischief is evident in “Extra-Large Size Happiness,” in which a giant yokai pops into the frame — directly behind the frazzled heroine’s mother-in-law. Readers familiar with InuYasha‘s Shippo and Myogi will immediately recognize this round, genial figure: 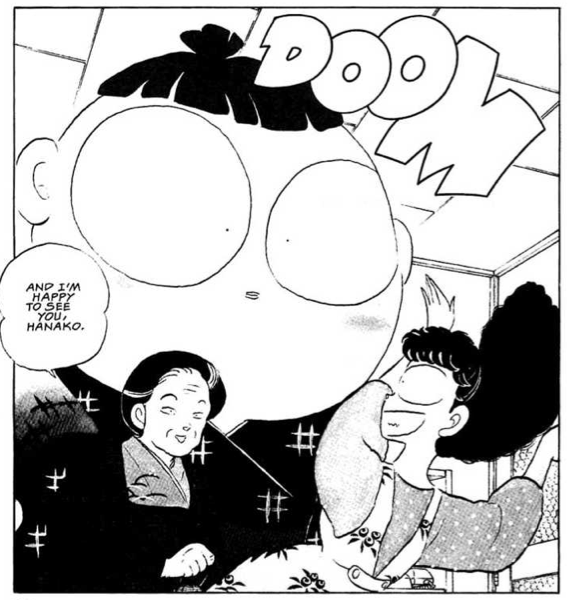 The similarities between this nameless yokai and Myoga could be construed as a flaw or weakness of Takahashi’s style, but there’s an argument to be made that Takahashi employs a “star system” of her own. Granted, Takahashi never constructed a neat theoretical framework to explain the recurrence of certain characters in her stories, as Osamu Tezuka famously did for his. Flipping through the pages of Rumic Theater, however, it’s easy to imagine these characters as actors who specialize in certain types of roles, retaining something of their own “off-screen” personality and appearance in every story; as David Welsh observed in his recent essay on Ranma 1/2, “The fun is in seeing the specialists find variations on their distinctive themes.” And here, in Rumic Theater, the fun comes from seeing Takahashi’s regulars tackle more grown-up themes — marital discord, neighborhood politics, growing old — than might otherwise be permissible in the context of a long-form adventure such as InuYasha or Ranma 1/2 .