Earlier this week in our Off the Shelf column, Michelle and I reviewed Kazue Kato’s Blue Exorcist, at which time the following exchange occurred:

MICHELLE: … While I do like the art style, particularly the looks of Rin and Yukio, I must say that the quirky-just-to-be-quirky garb of the academy’s president puts me off quite a bit. Usually I take characters with a bizarre sense of fashion in stride, but this guy’s outfit just seems extra pointless to me.

With this in mind, I’d like to dedicate this month’s Fanservice Friday to my bullet-proof costuming kink, CUFFED SLEEVES. Oh, the beauty of it all!

Since I mentioned Pandora Hearts specifically in the conversation with Michelle, I’ll use that manga as my prime example here. Clearly, Jun Mochizuki understands the power of the cuffed sleeve, as she’s filled up her manga with it. Furthermore, most of these sleeves occur on long coats, combining the deliciousness of both to substantial effect.

Raven does particularly well in the coat department, as you can see from the illustrations below. This is a long, flowing coat with a kind of bad-ass vibe, enhanced by the boots and hat. Note how Mochizuki accents the length and fullness of the cuffed sleeves with her choice of camera angle and poses. These illustrations are absolutely gorgeous, and they’re exactly the thing to satisfy my personal costuming desires. For the life of me, I can’t understand why anyone wants to see attractive manga characters nude or scantily clad, when they could be seeing them in a scrumptious coat. Everyone looks beautiful in a coat like this. 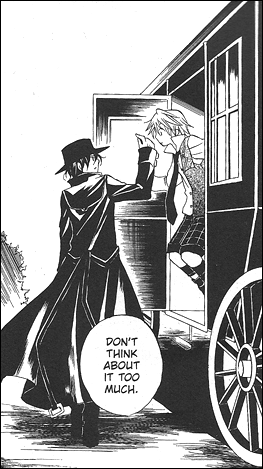 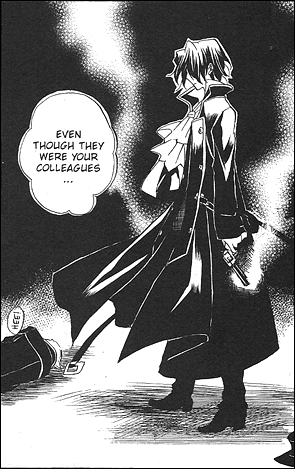 Break is also a winner in Mochizuki’s cuffed sleeve department, with a special feature that seems to belong only to him. In the scene below, you’ll see that Break’s overcoat is designed to sit perpetually off his shoulders (I’m not even sure it’s a separate piece of clothing). This has the effect of giving him over-long sleeves (another personal kink of mine), but it also actually creates the illusion of his sleeves being cuffed at the top as well as the bottom, for extra cuff-a-licious goodness.

Though this is an action scene with plenty of important stuff going on, I can’t help it, I’m looking at the sleeves. 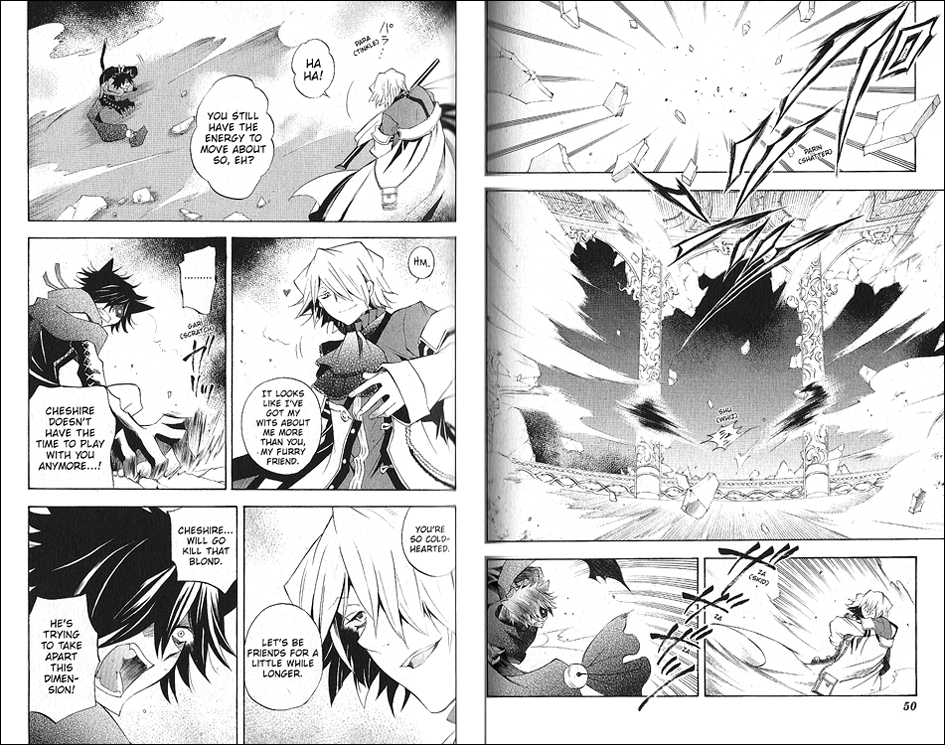 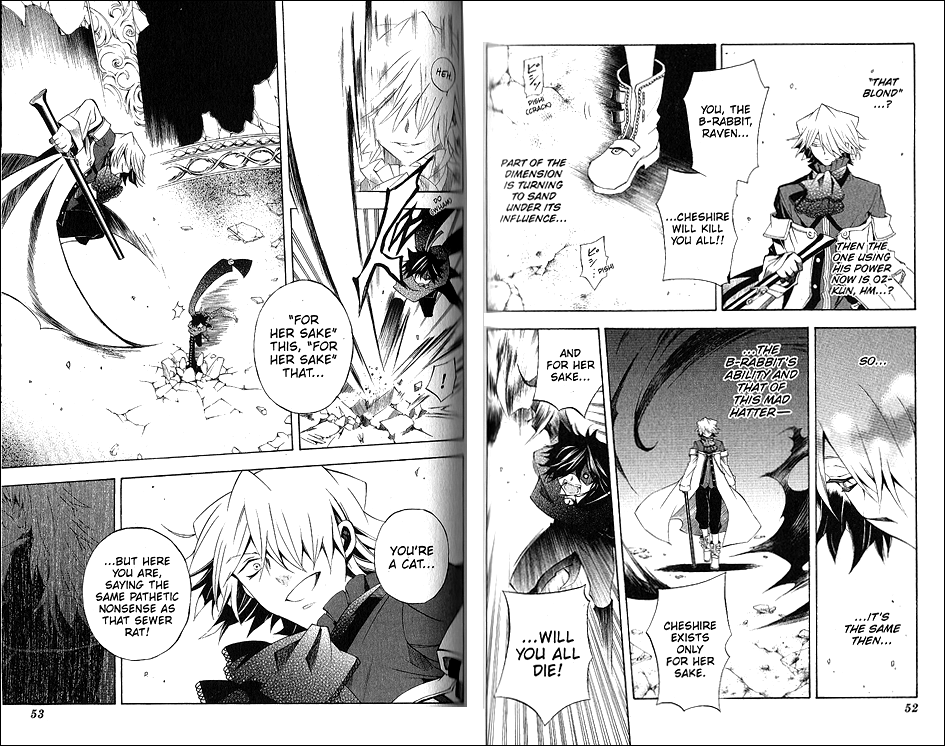 On the left below, you’ll see a particularly nice example of Break’s behavior as concerns his over-long sleeves (Mochizuki obviously has a thing for this, and so do I), but it’s not just the men who get good sleeve action in this manga. Sharon’s lacy cuff reveals another just below it, an interestingly dainty look for a character who’s really only dainty on the outside. Echo gets cuffs on the top of her sleeves (similar to Break’s), and even on her boots, attractively framing the thigh area for those who are into that. But the best cuffs really belong to Alice, based on sheer size alone, gracefully matching in scale the large bow at the front of her coat. 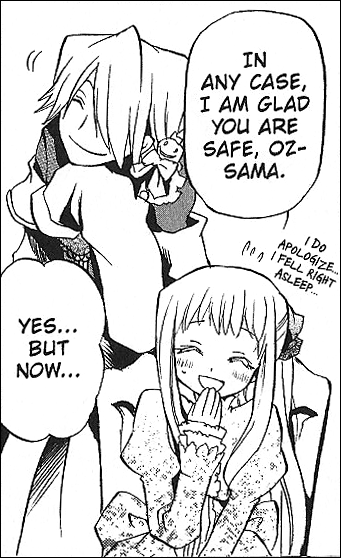 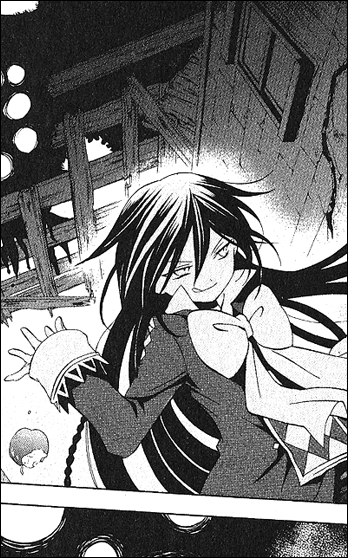 Not that Mochizuki is alone in her appreciation of the cuffed sleeve.

Though the look is most common in manga set in the west or in heavy fantasy settings like Blue Exorcist, mangaka like CLAMP, for instance, have demonstrated some love for large, lovely cuffs. In xxxHolic, Watanuki and Doumeki’s winter uniform includes a long, slim coat (nicely matched to CLAMP’s long, slim character designs) with elegant buttons and a substantial cuffed sleeve. And in Tokyo Babylon, doting sister Hokuto is seen dressing up twin brother Subaru in some beautifully cuffed outfits, including this flowing shirt from volume three. Here again we have a large cuff that extends slightly past the wrist, which is a favorite look for me. 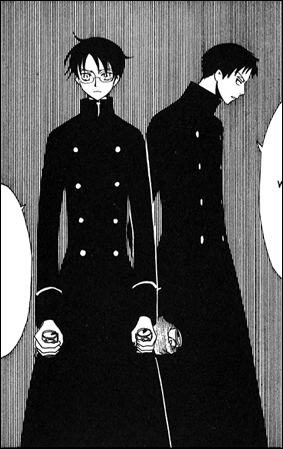 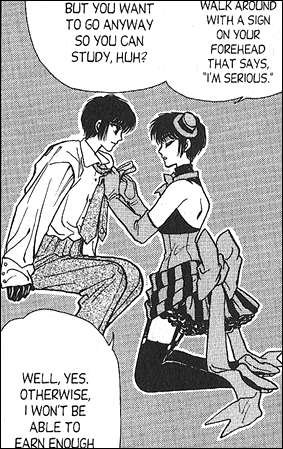 The allure of the cuffed sleeve is not limited to fantasy manga, either, nor to manga set in any particular period. Even modern gag series can be found sporting substantial cuffs, as seen here in Kōji Kumeta’s Sayonara, Zetsubou-Sensei. While Nozomu’s no-nonsense shirtsleeves provide a humorous contrast, peeking out from under his otherwise traditional garb (though of course, I wish they were wider!), student Kafuka’s coat is simply pretty and timeless. And no, those aren’t cuffs, of course, but they create a similar look that I’m very fond of, accenting the end of the sleeve by making it wider just before the wrist. 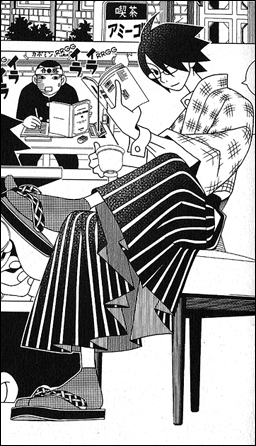 Why do I like this effect so much? I simply have no idea. I only know that it pleases my eye immediately, improving my impression of the outfit as a whole.

And though large, wide cuffs can often be used to accentuate the delicacy of smaller hands, they aren’t any less attractive when paired with large hands. Nor do I associate over-long sleeves with infantilizing characters, though I suspect they may sometimes be used specifically for this effect. 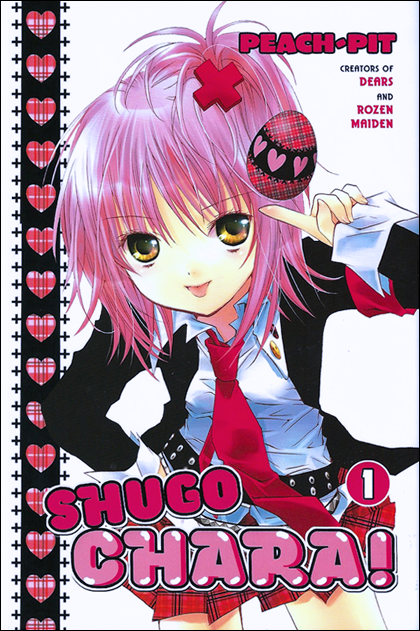 So, readers, do you have your own bullet-proof costuming elements? What piece of clothing makes you feel serviced as a fan?