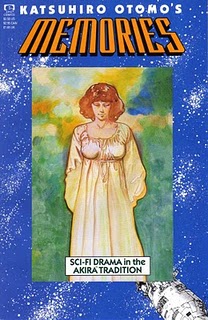 Given the speed with which DC Comics shuttered CMX Manga last year, it’s easy to forget that both DC and Marvel actually wanted to publish manga back in the day. Marvel’s manga output paled in comparison with DC’s, but is notable nonetheless, as Marvel helped introduce American readers to one the most influential manga-ka of the last thirty years: Katsuhiro Otomo.

Like Dark Horse, Eclipse Comics, and other companies who dabbled in manga publishing in the 1980s and 1990s, Marvel licensed work that it believed would appeal to the direct market. Marvel’s first acquisition was Katsuhiro Otomo’s dystopian epic AKIRA. Between 1988 and 1995, Marvel published the story in thirty-eight issues, each colorized and flipped in a calculated bid to woo American sci-fi fans. Though Marvel never finished collecting the original issues into bound editions, AKIRA proved important nonetheless, offering many American readers their first exposure to Japanese comics.

Marvel licensed work from other countries as well — including Airtight Garage and Blueberry, both by French artist Moebius — but never developed a substantial manga catalog; aside from AKIRA, the only manga it published were two short, stand-alone stories from early in Otomo’s career: “Memories” and “Farewell to Weapons.” “Memories” was issued in two forms: the first, in 1992, was a standard, thirty-two-page pamphlet with flipped, colorized artwork. The second, in 1995, was only released in the UK; Mandarin Books re-printed “Memories” and “Farewell to Weapons” as part of a longer anthology of Otomo’s short stories. (That anthology is called Memories and is out-of print; the ISBN is 0749396873.)

Plot-wise, “Memories” is simple but effective: a three-man salvage crew accepts a job clearing the “Sargasso Sea,” a debris field in deep space. They begin receiving a mysterious transmission from a large, rose-shaped ship inside the field, and decide to investigate. Once aboard, the crew makes an astonishing discovery: the interior resembles an English manor house with a formal dining room, an immense library, and a mysterious hallway guarded by robot sentries. As the men begin searching the ship for clues to the owner’s identity, a constellation of forces — including a fierce magnetic storm — threaten to compromise their mission.

It’s a tried-and-true sci-fi plot that’s enlivened by the efficiency of the set-up and the specificity of the art. Otomo wastes few pages establishing the crew members’ personalities and reasons for accepting the assignment. Though he teases the reader with hints about what awaits the men aboard the ghost ship, Otomo doesn’t belabor the introduction, swiftly transferring the action from the salvage vessel to the “magnetic rose.” The contrast between the ships is arresting; the Disposer is cramped, with plain steel walls and banks of computers, while the ghost ship is opulent and cavernous, festooned in elk heads, gilt-framed oil paintings, mirrors, and the kind of expensive bric-a-brac one might expect to find at Thornfield or Chesney Wold.

Normally, I’m a purist about black-and-white imagery, but Steve Oliff’s expert coloring brings clarity and emotion to the work that might otherwise be absent. Many of Otomo’s finer details — the pattern in an elaborate rug, for example, or the grain in a wood panel — pop with the judicious use of color, giving the ghost ship’s interior a more palpable feel. The use of rich reds, purples, and golds colors further reinforces strangeness of the environment; we, too, want to know why this lavish ship is adrift inside a cloud of metal, glass, and machine parts. Most importantly, however, Oliff uses color to underscore the characters’ emotional state, using an intense, disturbing green backdrop in the final pages of the story to suggest their growing state of panic as they discover the ship’s true purpose.

Readers curious about “Memories” won’t have any difficulty scaring up inexpensive copies on eBay; I paid less than a dollar for a bagged and boarded one in great condition. Anime fans may prefer to seek out the big-screen adaptation, which is longer and more detailed than the source material. (More information about the anime can be found here.) In either format, this short story is surprisingly eerie and graceful, proof that even the most familiar plot lines can acquire new power in the hands of an expert storyteller.