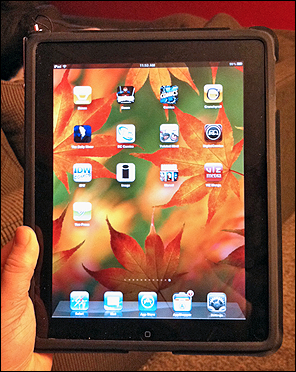 People made fun of the iPad when it was first announced, from its seemingly limited functionality to its unfortunate name, but over the last year it has proven to be probably the most exciting new device to enter the (as Steve Jobs likes to call it) “post-PC” market.

Besides offering much of the same day-to-day functionality we require of our desktop computers (web browsing, e-mail, and so on), it’s also a terrific tablet reader and possibly the best personal gaming device I’ve ever seen. Now with Apple’s recent announcement of the upcoming iPad 2, complete with new video cameras and (frankly amazing) new versions of iMovie and Garageband written especially for the iPad, it’s definitely the device every forward-thinking company wants a piece of.

If this is beginning to sound like a paid iPad commercial, that’s only because I have to pretty much fight my husband to get just a couple minutes of time on his iPad, that’s how much use he gets out of the thing. It has become the centerpiece of our gadget-geek household (which is saying quite a bit), so not much could make me happier than to see my own personal geek obsession making inroads in the iPad market. Comics publishers, including a few manga publishers, have been putting out apps left and right, and we’ve got ’em all.

Viz’s iPad app has an immediate edge over its current competitors in the manga market, simply because Viz has actually managed to acquire digital rights for titles from Japan, something that companies like Yen Press and Dark Horse have had some pretty obvious difficulty with.

Most of the titles offered are popular ones too, like Bleach, Naruto, and Vampire Knight, with a few surprising treats like older series Rurouni Kenshin and some quirky shoujo picks like Natsume’s Book of Friends and Otomen. Shounen series dominate the app by far at this point, with no sign at all of older-aimed titles from Viz’s IKKI and Signature catalogues, and just the barest sprinkling of shoujo.

Navigation is simple and pretty intuitive. The app’s landing page features three simple tabs in the middle of the screen for checking out new arrivals, as well as “featured” volumes and a small selection of free previews. 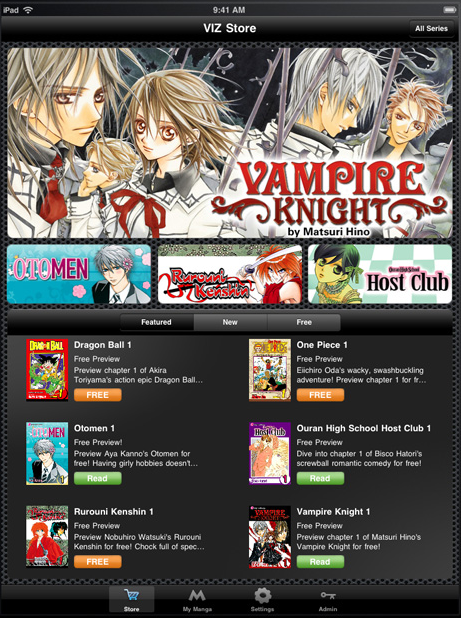 A button on the top right provides access to a list of all available series, though there doesn’t seem to be any way to flip through all available volumes, the way one might in the bookstore aisle. Not that browsing between series is a hardship at all, as the “All Series” button remains on every page of the app.

Purchasing or previewing a volume is pretty easy (though full volume downloads can take some time), and everything is purchased in-app. But the app does require that you create a Viz account before you can make purchases using iTunes. And since signing into your account moves you away from the screen where your purchase was initiated, you have to manually navigate back to the original page in order to complete the purchase. Fortunately, once you’ve signed in, you’re not required to do so again during the same session.

Getting to the important stuff: Viz’s manga looks great on the iPad, especially when viewed as single pages, portrait-style. Images are crisp and clear, and text is easy to read.

In wide-screen, double-page mode, artists with heavy inking and contrast fare the best (like Bakuman and Death Note‘s Obata), while those with a lighter, sketchier style suffer somewhat with the smaller page size, though nothing is genuinely difficult to see. 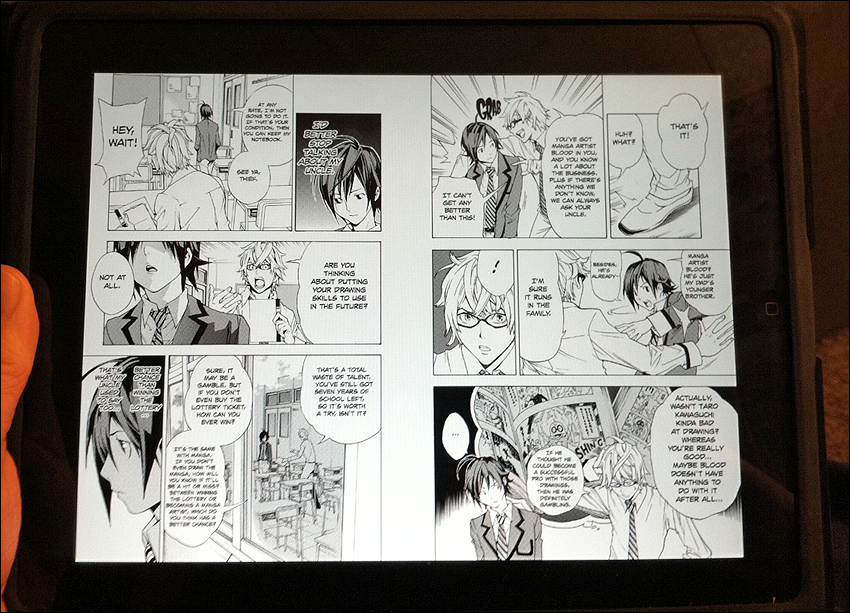 Enlargement of a single panel is incredibly easy. Double-tap on any panel for a close up, and then double-tap to return. The iOS two-finger pinching works on all pages as well, both in single and double-page mode. 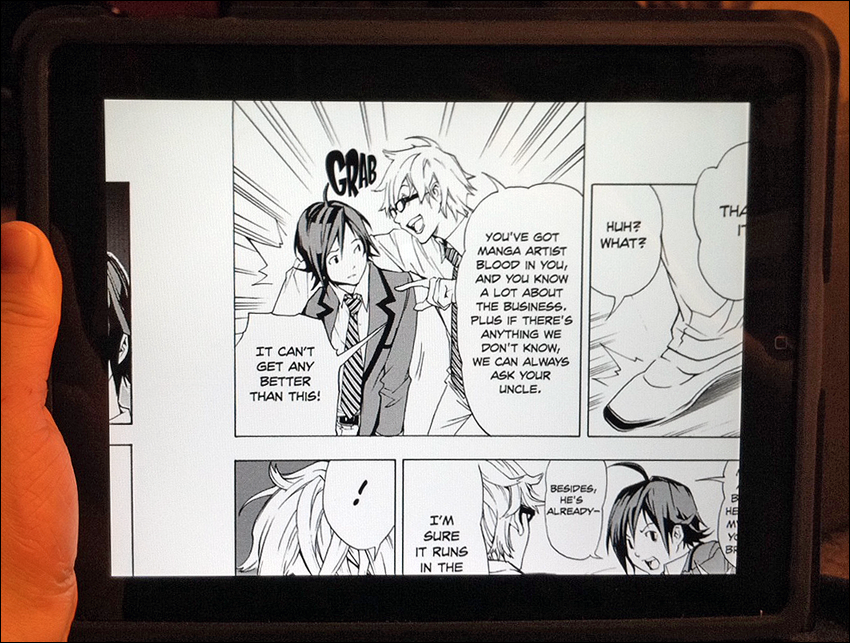 Purchases are downloaded directly to the iPad, so they can be saved in your library forever–a much nicer deal than most of the online “rental” models we’ve seen from manga publishers up to now–and first volumes of all series are currently offered for just $.99 apiece, which is a pretty unbeatable deal.

The $4.99 price tag on subsequent volumes is a bit too high to encourage buying in bulk, especially when brand new physical volumes of most of these series can be found for just a few dollars more on Amazon (and for at least a couple of dollars less used). While it’s easy to imagine buying volumes of newer, currently running series (like Bakuman or Toriko, both available now) for that price, the idea of trying to catch up with long-running series (like Bleach or One Piece) at $5 a pop is much less enticing. Lowering the price of later volumes by even just a dollar would make these longer, older series more attractive, especially as bulk buys.

Accessing all your downloaded manga is very easy–just a single click on the “My Manga” button found at the bottom of every screen, and preferences can be set for maximum storage size. Any overflow can be deleted from the device as needed, then re-downloaded whenever you’re ready to read. The app’s storage settings allow you to see or hide titles not currently stored on your device, whichever you prefer. You can also choose to be notified (or not) when new volumes of your downloaded series are available for purchase.

With such a relatively small percentage of Viz’s catalogue (just sixteen series at this time) currently available in their iPad store, it would be a stretch to describe it as a great source for manga, but it’s not difficult to imagine the possibilities.

Many have already pointed out its potential as a platform for long, out-of-print series, particularly the scads of fantastic 80s and 90s shoujo Viz put out on their now-defunct shôjo imprint. Packaged “omnibus” editions with several volumes for a reduced price could be very exciting as well, making it truly feasible for both old and new fans to catch up on longer series they might have missed during their original print runs. Whether Viz is willing or able to make any significant volume of its back catalogue available remains to be seen, as is whether or not any of their more sophisticated titles will ever hit these digital shelves.

Still, Viz is adding new manga to their store at a pretty brisk pace, as Kate recently reported in her coverage of their new “March Madness” campaign. Let’s hope we’ll see much more to come!