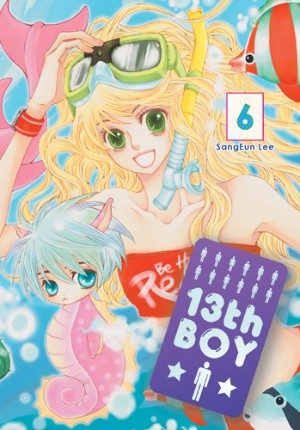 With February finally underway, it’s time to take a brief look at this month’s upcoming manhwa releases! In keeping with the recent trend, there are few of these to report for February, though more than we had last month.

First, a belated listing for volume seven of Bride of the Water God from Dark Horse. Though Amazon (my source for these preview posts) lists a release date of February 8th, the volume actually appeared on shelves two weeks ago, bringing January’s release total up to… two. Yay?

This month, we’ve only got two print releases to look forward to, both from Yen Press. The first is volume five of JinJun Park’s zombie manhwa Raiders. Secondly, we’ll see volume six of one of my personal favorites, SangEun Lee’s supernatural romance, 13th Boy, Vol. 6, still consistently winning my heart with its understated whimsy, including talking cactus Beatrice.

On the digital front, NETCOMICS may finally be coming back to life, having recently released new chapters of both Sungmo Kim’s Emperor’s Castle and (another personal favorite) Sooyeon Won’s Full House. Though they’ve stopped short of scheduling any future chapter updates, new content after a few empty months does suggest hope. And following up on last week’s post, iOS publisher iSeeToon offers up a second trailer for their upcoming webtoon release, Ill-Fated Relationship.

This week in reviews, Angela Eastman takes a look at volume seven of Very! Very! Sweet (Yen Press) at Mania.com, and at A Reader of Fictions, Christina hates Sugarholic.