MICHELLE: Welcome to a rather… special edition of Off the Shelf! Before we launch into our selections today, I wanted to provide a little background. Y’see, although I genuinely love a very wide spectrum of manga, no matter the demographic to which it’s aimed, there’s still one genre from which I instinctively steer clear: the blatantly fanservicey. When two debut series, each putting its cover to boobalicious use, were released in the same month, I decided to challenge myself to read them, hoping that beneath the titillating exterior I’d find a good story that I would’ve otherwise missed.

MICHELLE: Er, yes. Anyway, I enlisted Melinda to participate in this experiment along with me, which brings us to this evening’s mammarian extravaganza.

How went your forays into fanservice? 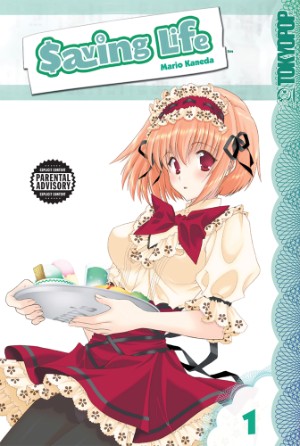 MELINDA: Well, they were mixed, to be sure. I’ll start from the bottom (so to speak) and move up. My first ultra-servicey selection was Mario Kaneda’s Saving Life, published in English by TOKYOPOP.

Haruhiko is a rich high school kid who has left home to escape his father’s influence. Living on his own is tougher than Haruhiko imagined. He’s pretty lonely in his new digs, and has even filled the place up with scavenged (mostly broken) appliances just to make the place feel less empty. On top of that, money troubles send him scraping for part-time jobs and scrounging for change from his school’s vending machines. Fortunately, his two closest childhood friends, Yoriko and Nanako (who just happen to be totally boobalicious babes) are waiting to come to the rescue!

Haruhiko’s accident-prone and super-clumsy (unless he’s working), so much of the story so far consists of him accidentally falling into one (or both) of the girls, often while they’re nearly naked, and there’s always some kind of water-related incident coming into play just in time to ensure that the girls’ clothes get soaked through.

Obviously story was never the point here, and Kaneda barely tries. I have to give high marks to the boobs, though. While it’s established early on that Haruhiko is an ass man, Kaneda doesn’t skimp on the chest area in the slightest. They’re all on the large side (but not toooo large), and Kaneda brings them into focus pretty much whenever possible. The worst part of this series’ fanservice is its contrived human pile-ups and blushing-shy-girl cheesecake poses the female characters are constantly maneuvered into.

I assume that this series’ target audience knows what it’s getting into here. Unfortunately, despite its perfectly nice boobies, I can’t recommend it for anyone else.

MICHELLE: Your description reminds me of the the time I tried to read Negima!. Though I’ve heard it develops a plot later on, the first volume was almost entirely girls tripping and sprawling over the young protagonist or him accidentally walking into someone’s bountiful bosom.

You bring up a good point: characterization counts with boobalicious ladies! Badass ones, like Revy from Black Lagoon (as seen here) do not trouble me one bit, especially if it seems that they dress the way they do because they want to and not to catch some fella’s eye. Boobalicious girls who simper and are brainless, however, make steam come out of my ears.

MELINDA: What’s a little sad, is that both Yoriko and Nanako have some interesting character traits and they’re generally not weak. But they’re always weak when Kaneda is overtly sexing them up, which is pretty gross to me.

So what bountiful bosoms do you have to share tonight? 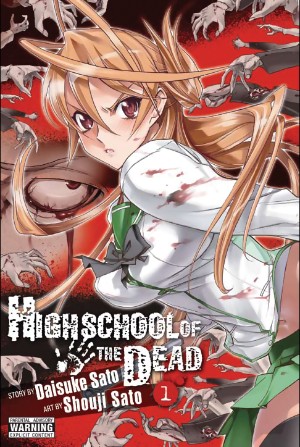 MICHELLE: Interestingly, both of my picks are disaster/survival stories, so they’ve got much more plot than Saving Life seems to have.

First up is Highschool of the Dead, by Daisuke and Shouji Sato, a fast-paced action movie sort of manga in which a sudden zombie outbreak at Fujimi High School is just the latest development in a more widespread epidemic. A few resourceful students manage to escape the carnage, after many scenes in which classmates maul and/or kill one another, and the volume ends with the small band poised to check on their families and gauge the condition of the rest of the town.

Does it matter that I haven’t given you any characters’ names? No, not really. You’ve got the hotheaded guy, the girl who was his childhood friend, a geeky dude, a smart girl, the cool and composed female kendo captain, et cetera. No one has any depth, and a few things don’t make much sense, but at least some of the girls are given the opportunity to be strong and useful.

It’s certainly not a great manga, but I enjoyed it well enough—about on par with how I enjoy Raiders, another zombie-related Yen Press title—to want to see what happens next. (Plus, it earns a few bonus points for what might have been a Shaun of the Dead reference.)

But oh, the boobs. They are hideous. I think Kate Dacey called them something like “distended lemons,” and there’s really no better way to put it. The ones on the cover are bad enough—that pose is impossible and her arm looks like it’s on backwards!—but worse lurk within. I have seen my share of bodacious boobs, but never any that were so huge that they had to extend beyond the panel’s border! Behold: 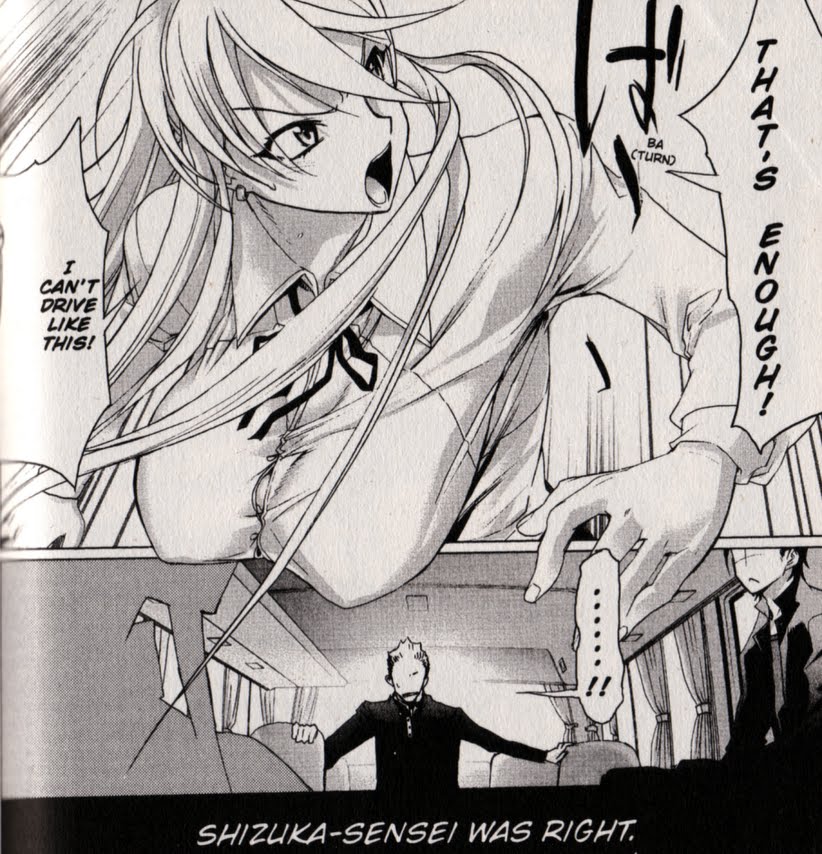 Those are not attractive bosoms. Those are head-scratchingly bizarre bosoms. How can one pay attention to a zombie uprising whenever these avocados of doom keep thrusting themselves in one’s face?

MELINDA: Well, heavens. You know, I was so distracted by the hilariously unnecessary panty shots when I read this manga, I somehow missed the strange, missile-shaped boobs entirely. Also, I’m quite taken with the phrase, “avocados of doom.”

MICHELLE: Oh god, yes. Even scenes that I wanted to like for their grim depiction of human nature—for example, a pair of girls whose eternal friendship lasts precisely as long as it takes one of them to fall into a zombie’s clutches—are marred by gratuitous panty shots. I really don’t get the appeal. I conducted an informal poll of two whole guys and neither of them found it sexy, either. They could’ve been dissembling, I suppose, but I doubt it.

MELINDA: That was really the saddest thing about this book, wasn’t it? There was some stuff to say, after all. It may not be the most original stuff–this ground has been covered pretty extensively in nearly every medium-but it was there. Still, it’s the fanservice that drives the series, which is just kinda… icky.

MICHELLE: Yeah. In the end, I’ll be back for volume two, but I won’t be expecting much.

I take it you liked your second selection more than the first. 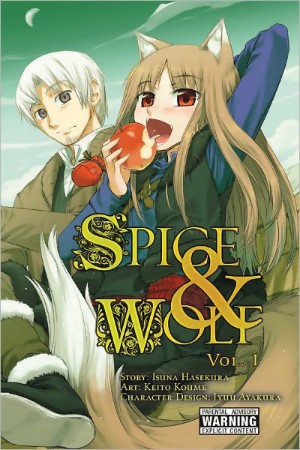 MELINDA: I did in a way, though not for itself, actually. My second pick was volume one of Spice & Wolf, adapted by Keito Koume from Isuna Hasekura’s novels. Yen Press is publishing both concurrently, which on one hand is pretty cool, but on the other, really exposes the weaknesses of the adaptation.

Kraft Lawrence is a traveling merchant who, after encountering a village harvest festival in the midst of his travels, discovers that the village’s harvest “god” (a 600-year-old wolf-spirit named Holo, who appears as a teen girl with a wolf’s ears and tail) has stowed away on his wagon. Anxious to return to her northern homeland, Holo begs to join Kraft on his travels, and though he’s initially a bit wary, Kraft agrees. As it turns out, 600 years of observing mankind has given Holo a great sense for both business and human nature, so she’s pretty useful as a merchant’s companion. Unfortunately, with the church so much in power, her supernatural appearance poses a threat to her survival.

This premise sounds fascinating, and honestly it is. But wordy explanations of medieval economics don’t necessarily translate well into visual storytelling, and unfortunately that’s what happens here. While the series’ first novel is a pretty good read, especially for fantasy fans who are weary of the usual swords and magic stuff, the manga’s debut volume plods endlessly along, so unsuited to full visual treatment, the illustrations feel like they’re actually in the way of the story.

In the end, I’d recommend picking up the novels, but leaving the manga alone. With a title this popular, I’m sure there are plenty of Holo artbooks out there for those who require their sexy teen fix.

Unlike Saving Life, Spice & Wolf gives Holo the full bare-breasted treatment, and since even I feel creepy discussing this with a character who looks so young, I’ll refrain from attempting to rate them.

MICHELLE: I have seen the adjective “creepy” applied to Holo’s nude scenes before, which is why I have no intention of reading the manga adaptation of a light novel series with such a unique and interesting concept. This is another case where I just have to go, “Why?” Do you think it’s partly to compensate for the elements of the story that fail to translate well to a more visual medium?

MELINDA: Well, this may be an unfair assumption, but it seems to me like it’s just for the purpose of pleasing male fans who aren’t able to fantasize on their own with the prose.

MICHELLE: Could be, though I’m sure plenty of guys find this all creepy, too.

MELINDA: Well to be clear, I’m sure that lack of imagination doesn’t apply to all men. :)

So, what was your second boobalicious book? 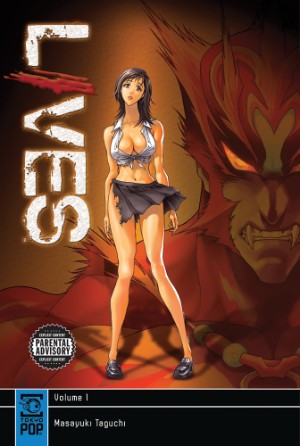 MICHELLE: My second pick was the first volume of Lives, a new two-volume series from TOKYOPOP. Like Highschool of the Dead, it wastes little time getting to the disaster du jour—a rain of asteroids that appears to kill a few people who then, mysteriously, wake up unharmed in a jungle. It quickly becomes clear that all of the creatures there were at one point human and that many are unable to overcome the urges that compel them to attack and eat their fellow mancritters. There’s no explanation for this—unless you count the nude angel who descends to inform a schoolgirl she was perfectly right to eat her brother—and I’m a little concerned that there won’t ever be much of one, given that there’s only one more volume in the series and that this one spends far too many pages on a subplot about intra-dojo rivalry.

The fanservice is not quite as intrusive as in Highschool of the Dead, though there are still visuals like topless, disemboweled corpses that I could have done without. What bothers me more is the characterization of the women. The fact that the girl on the cover is wearing very little, for example, is less troubling than the fact that she looks completely dazed and vacant. Another female character is introduced as the most competent member of a sexy singing group, but she very quickly loses any cool points she might have possessed by blushingly making out with her skeevy manager about two minutes after her bandmates have been viciously slaughtered.

Scattered storytelling and weak women don’t do much to encourage me to keep reading, but since there is only one more volume I will probably be a completist and read it, even though I expect that it will be lame.

MELINDA: But what about the boobs, Michelle? You’re missing what’s really important here.

MICHELLE: They’re your standard big bazongas. Improbably huge and round and bouncy, but at least they won’t poke your eye out.

MELINDA: And so we give thanks for small blessings.

MICHELLE: Ha, yeah. Ultimately, I’m glad I didn’t let the fanservice keep me from reading these two books. Perhaps I fared better than you did in terms of my selections actually having plots—I still can’t picture myself reading an ecchi romantic comedy, really—but though they weren’t that good, they weren’t that bad, either.

Join us again next week for an all new Off the Shelf!