Having spent much of 2010 championing comics for women and girls here at Manga Bookshelf, it gives me a lot of pleasure to be able to choose a new shoujo title for the year’s final Pick of the Week. It’s a title that I think holds appeal for both teens and adults, and may very well qualify as one of my favorite shoujo debuts of the year, along with a number of Shojo Beat series, including Natsume’s Book of Friends, The Story of Saiunkoku, and Seiho Boys’ High School!, as well as TOKYOPOP’s Demon Sacred. 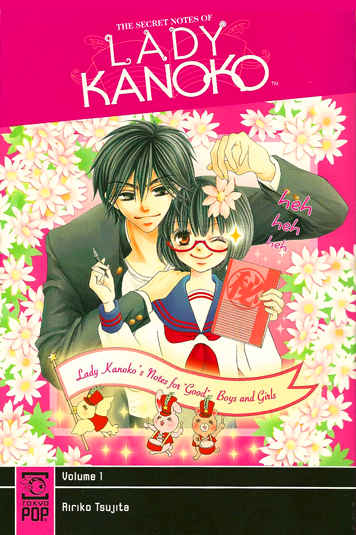 This title, too, comes from TOKYOPOP. I’m speaking, of course, of The Secret Notes of Lady Kanoko, created by Ririko Tsujita. Here’s some of what I had to say about its debut volume in a recent installment of Off the Shelf:

The series’ title refers to Kanoko, a third year junior high school student who prides herself on perfect objectivity. To maintain this emotional purity, she spurns any kind of social interaction with her classmates, preferring to simply observe (and, of course, take copious notes). When her interest is piqued by a classroom love triangle, Kanoko is shocked to find herself somehow drawn into the fray by each of the parties involved, and even more so to find herself accidentally befriending them.

My experience with this manga was a bit of a roller-coaster ride. I was immediately drawn in by Kanoko and the gloriously idiosyncratic friendships she develops against her will. Then, amidst a deep sigh of contentment, I was jerked right out of my shoujo-induced bliss by the volume’s second chapter, which begins with Kanoko having transferred to a new school, leaving everything I’d just learned to care about abruptly behind. My dissatisfaction continued through at least two more chapters before I finally realized that this is actually the premise of the series. That’s also when I realized that it’s brilliant.

Using Kanoko’s impossibly frequent school transfers as a structural conceit, Tsujita sets herself free from the bothersome constraints of reality, while also weaving in some of the most wonderfully real characterization I’ve seen in a manga comedy. It’s as though some sleep-deprived manga editor spliced together pages of Kimi ni Todoke with Sayonara, Zetsubou-Sensei, absent-mindedly inventing a new and delicious flavor of shoujo satire that manages to consistently maintain the gag while telling an unexpectedly heartwarming story at the same time …

The real secret to the story’s success, however, is Kanoko herself. She’s smart, hilarious, and even kind of heroic, like a super-hero version of Harriet the Spy. She wards off bullies by genuinely not caring what they think of her, and blows off “friendly” saboteurs with little more than a sneer. I seriously wanted to applaud several times during the first chapter alone. She’s also deeply damaged and a complete mess, but even that’s not overplayed. It’s astonishingly well done.

Kanoko is smart, funny, and a whole lot of fun. Buy the first volume and see for yourself!