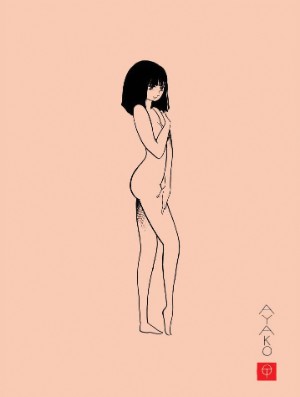 Normally I wouldn’t recommend a manga completely sight-unseen, but it’s hard to ignore a new release of anything from Osamu Tezuka, even if my own copy hasn’t reached me yet.

I’m speaking of course, of Ayako, the latest of Vertical, Inc.’s Tezuka acquisitions, released in one gigantic volume (seriously, it’s 740 pages) just in time for the holidays. Not that this is a particularly festive tale. Here’s the description from Vertical’s website:

Opening a few years after the end of World War II and covering almost a quarter-century, here is comics master Osamu Tezuka’s most direct and sustained critique of Japan’s fate in the aftermath of total defeat. Unusually devoid of cartoon premises yet shot through with dark voyeuristic humor, Ayako looms as a pinnacle of Naturalist literature in Japan with few peers even in prose, the striking heroine a potent emblem of things left unseen following the war.

The year is 1949. Crushed by the Allied Powers, occupied by General MacArthur’s armies, Japan has been experiencing massive change. Agricultural reform is dissolving large estates and redistributing plots to tenant farmers—terrible news, if you’re landowners like the archconservative Tenge family. For patriarch Sakuemon, the chagrin of one of his sons coming home alive from a P.O.W. camp instead of having died for the Emperor is topped only by the revelation that another of his is consorting with “the reds.” What solace does he have but his youngest Ayako, apple of his eye, at once daughter and granddaughter?

Delving into some of the period’s true mysteries, which remain murky to this day, Tezuka’s Zolaesque tapestry delivers thrill and satisfaction in spades. Another page-turning classic from an irreplaceable artist who was as astute an admirer of the Russian masters and Nordic playwrights as of Walt Disney, Ayako is a must-read for comics connoisseurs and curious literati.

Sounds like a must-read to me! If you agree, buy this book!