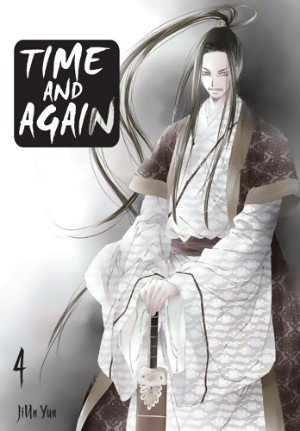 It’s an especially rough week for choosing a Pick, with new volumes of a number of my favorite series hitting shelves at Midtown Comics. Yen Press delivers big this week, with volume five of ninja manga Nabari no Ou, as well as the final volume of the aptly named manhwa Very! Very! Sweet. Tokyopop brings us volume three of previous Pick Demon Sacred, and though it’s not on Midtown Comics’ list, David Welsh reports that we’ll be seeing volume two of previous Pick 7 Billion Needles.

One stand-out title that has not previously turned up here at Pick of the Week, however, is my favorite ghost-hunting manhwa, Time and Again, written by JiUn Yun, published in English by Yen Press, which sees the release of its fourth volume this week.

Here’s some of what I had to say about volume four:

Though both the last two volumes have delved a bit into these characters’ rather tragic pasts, this volume really gets to the heart of Ho-Yeon’s history and the events that led to the deep regret he’s carried with him all this time. It’s extremely moving, and I have to laugh now when I look back at my review of the series’ first volume, where I complained that its main characters were both “underdeveloped.” That’s certainly turned around over the past few volumes.

This volume also shows us Baek-On and Ho-Yeon’s introduction to each other, which manages to be tragic and a little bit funny at the same time. You know, I don’t think it’s everyone’s cup of tea, but JiUn-Yun’s sense of humor just really works for me. I am always delighted by it. Baek-On is such an… unfortunately honest character. He’s got no delicacy at all, but that’s really part of his charm.
Possibly the best thing about this volume, however, is that it also contains the first meeting between Ho-Yeon and Shin-Wal, the spirit-sword we’ve seen him with since the series’ first volume. It’s kinda beautiful, I have to say.

This is an especially warm volume, despite all its tragedy, and though the series’ original, episodic flavor has mostly flown out the window, I think the story is better for it. Don’t get me wrong, this volume still follows the two of them along on a few cases, but they’re far from the focus of the story anymore, which has just increased its interest for me.

With just four volumes published to date, it’s a great time to dig into this increasingly engaging manhwa. Buy these books!