I like to avoid repeating series here at Pick of the Week, but this week’s somewhat lackluster showing at Midtown Comics contains just one standout item that I can’t rightfully ignore. 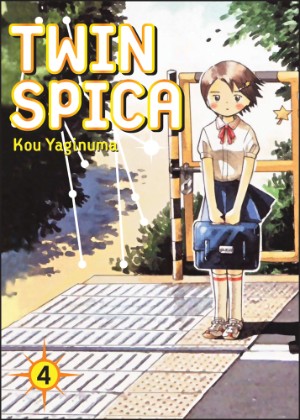 I doubt if anyone still needs me to tell them to buy Twin Spica, but just in case, I’ll shout it far and wide.

I haven’t got my own copy of volume four yet (for shame, Melinda, shame!) but here’s what I had to say about volume three:

I’ve already named this as my favorite new series this year, so my expectations were pretty high, but this volume managed to exceed them anyway.

Volume two ended with some drama that I expected would overwhelm the series for a while, but though it was certainly the focus of the first chapter or so here, the way it worked itself out was fresher and more poignant than I could have imagined.

Everyone in this series has suffered loss of some kind, but what is rare in a story with a teenaged protagonist is that the pain and loss of the story’s adult characters is given the same weight as the pain of its teens. And though the series is being marketed heavily to YA audiences here in the US, I think this is one of the aspects of the series that most reveals its originally intended demographic.

“I wonder why all grown-ups smile so sadly,” Asumi ponders, though she nearly answers her own question as she goes on, “I wish Miss Suzunari, Mr. Lion, Dad, Mr. Sano… I wish everyone could go up there.” That so many before her have already failed to achieve the very dream she now pursues may be a realization that still eludes Asumi, but it is not at all lost on readers, who are struck with this painful reality with the same force as the story’s ambitious teens put into trying to ignore it.

That said, there is just as much here for teen readers as there is for adults. The devotion the students in this story demonstrate toward each other, even as they compete for seats on the same spacecraft, is beautiful to behold. By the end of this volume, I had tears running down my face, and I challenge any reader to avoid the same fate, adult or teen.

Tears RUNNING DOWN MY FACE, people. What I mean to say here is BUY TWIN SPICA. You won’t regret it.