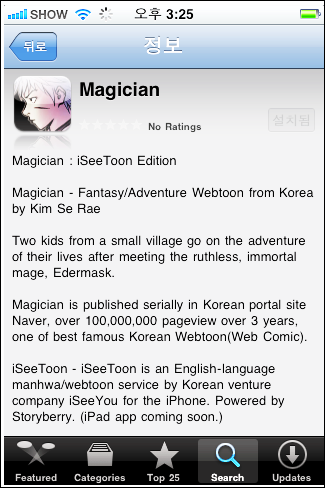 Welcome to another Manhwa Monday! This morning’s big news is the official launch of the Magician app from new webtoon publisher, iSee Toon, available now for the iPhone and the iPod Touch. Here’s an excerpt from the announcement that appeared on the company’s blog early this morning:

“[Magician] App is released. (Direct Link)
You could search [Magician] at iPhone App Store. With this App, you could read until Vol. 2 for free, purchase until Vol. 5. You could purchase additional volumes $0.99 each. We will update this App for better experience of users.”

Though iSee Toon’s blog needs some urgent help from a native English speaker, I think you get the gist.

The app requires iOS 4.1, which means that iPad users (like me, this morning) who race to the App Store to pick up Magician will be bitterly disappointed. Perhaps we’ll be able to pick it up after the upcoming release of iOS 4.2? We live in hope.

iSee Toon has picked up a bit of buzz lately, including a mention in the official KOCCA (Korea Creative Content Agency) blog, which quotes company spokesperson Kim Jin Sung, and an enthusiastic shout-out from Daniella Orihuela-Gruber, who worked on Magician‘s English adaptation.

This week in reviews, a couple of back volumes of popular Yen Press manhwa are getting some attention. First, at Slightly Biased Manga, Connie checks out volume seven of Goong. Then, at Manga Village, Justin Colussy-Estes takes a look at volume nine of One Thousand and One Nights, observing that even with no knowledge of the series early volumes, its stories-within-the-story still make the read well worthwhile. “I highly recommend you find a volume of this rich, exciting, consuming epic series and get lost in all the stories it has to offer.”

In new (and upcoming) Yen Press releases, at Manga Xanadu, Lori Henderson runs through the October issue of the new, digital Yen Plus, which includes new chapters of Time and Again, Jack Frost, and Aron’s Absurd Armada. I also take a look at the upcoming fourth volume of Time and Again in last week’s Off the Shelf column at Manga Bookshelf.

And reviews continue to pile up for the first volume of Japanese-produced, Korean-created March Story (Viz Media), with takes from Bill Sherman at Blogcritics.org and Chris Zimmerman at CBS4. (Thanks to Brigid Alverson for both those links!)