Popular entertainment thrived on this principle also, ensuring that most film and television with any real money behind it would be geared to male viewers. We’d come along too, the executives figured. And sure enough, we did. In fact, in 2009, women dominated the movie-going market, though only a couple of big hits were deliberately made with us in mind.

Though the Japanese manga industry offers girls a veritable treasure chest by comparison, girls still spend a lot of time in the shonen section of the store, enough so that publishers deliberately court a female audience, even for manga created for boys.

Watching the industry from the English-language side, we’re not always privy to Japan’s subtler trends. Titles are generally chosen here with American tastes and habits in mind, and Japanese demographic categories frequently become meaningless. Casual fans rarely know or care how their favorite titles are marketed in Japan, let alone what magazines they ran in.

But for those of us who read a lot of manga, and who are likely to identify books with their publishers, certain things eventually become apparent. This entry concerns a trend that’s become particularly fascinating to me as a female reader who enjoys quite a bit of shonen manga.

All of the cover art displayed above belongs to manga series that run in the same magazine. That magazine is Square Enix’s Monthly GFantasy. Its demographic? Shonen.

So why are these shonen titles plastered with fanservice… for girls?

Some of the licensed titles that have run in GFantasy include Switch, Gestalt (both published by Viz Media), Black Butler, Pandora Hearts, Zombie Loan, and Nabari no Ou (all from Yen Press). Something all these titles share in common (besides a gallery of drool-worthy bishonen covers) is that they’re all written and drawn by female mangaka. Though women drawing shonen is hardly revolutionary, a collection of so many in a single magazine seems notable indeed. And with the kind of artwork that’s being displayed to market this manga, it seems likely that Square Enix has gathered them for a reason: to draw in a female audience.

Though each of the titles I’ve mentioned contain fanservice for girls, some of it is so subtle, you’d never know from a quick glance. Gestalt, for instance, contains as much (or more) fanservice for male readers, with its female lead, Ouri, prancing around in outfits that reveal a bouncing bosom any shonen manga would be proud to display. All the women in Gestalt are voluptuous, while most of its men are somewhat nerdy, especially glasses-wearing Father Olivier who begins as sort of the hero of the piece.

Yun Kouga’s trick is in text more than in pictures, where she reveals in the first volume that curvy Ouri is actually a man, lending new, exciting undertones to a scene like this. 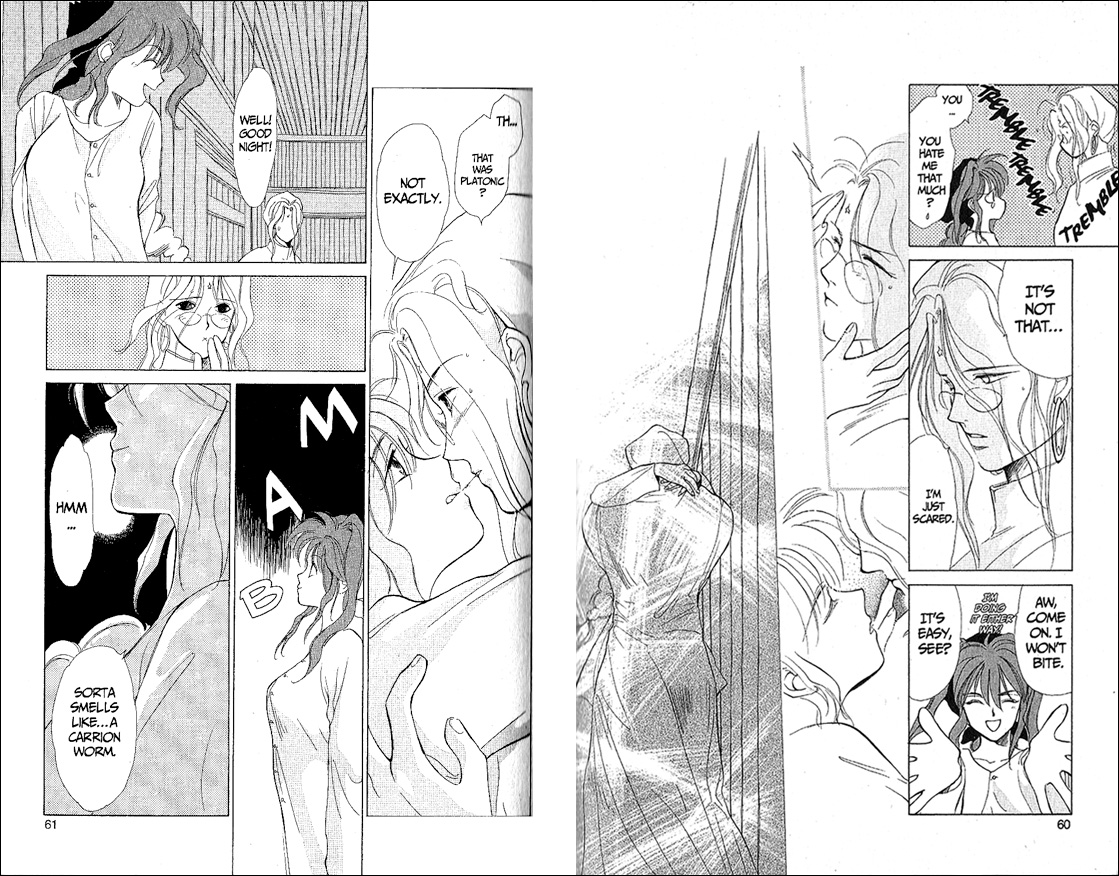 Gestalt is an older manga than the others on this list, running from 1992 to 2001, which may account in part for its more traditional boobs and butts. Kouga’s artwork, too, though attractive, lacks the excessively pretty bishonen that dominate many of the magazine’s current series.

Still, the story’s gender-bending heroine provides titillation for both its male and female readers, while bringing to mind Deb Aoki’s recent question on Twitter, where she asked if Shonen Jump manga might be the gateway drug to yaoi.

Of course, some of GFantasy‘s titles are more subtle than others. 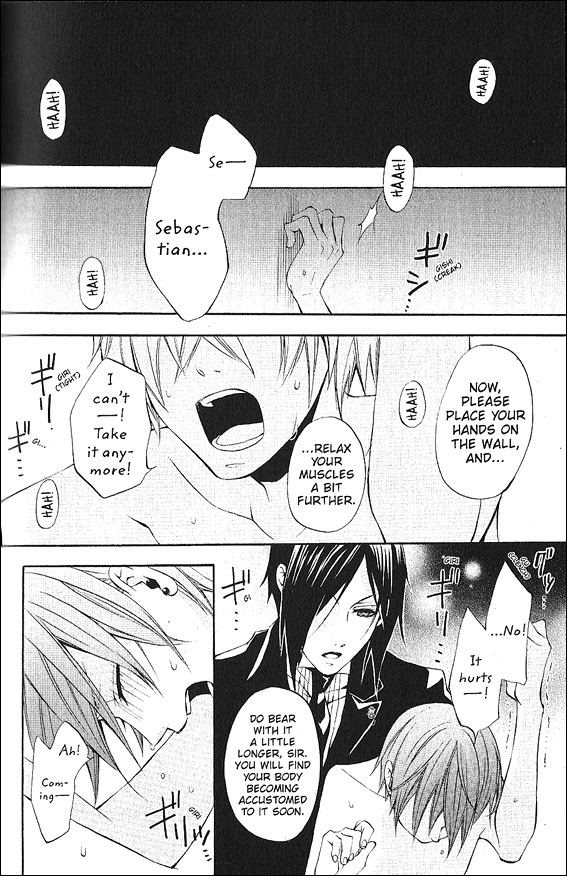 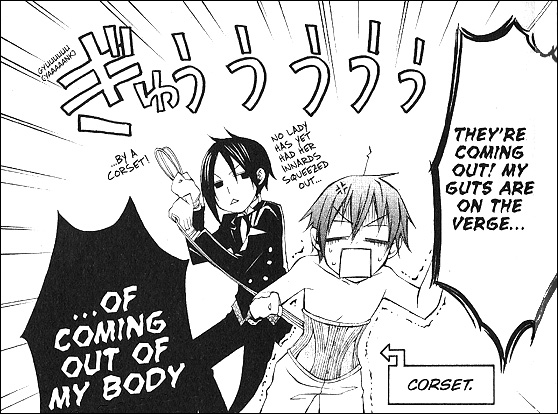 Yana Tobaso’s Black Butler, in particular, makes use of heavy BL subtext (as well as actual parody text as illustrated above) to please its female readers, particularly playing up the relationship with butler Sebastian and underaged Ciel, tapping into not just BL fans but shota fans in particular.

While that particular type of fanservice is not at all my cup of tea, elements of shotacon can be found even in my favorite GFantasy series, Jun Mochizuki’s Pandora Hearts, a serious fantasy tale that uses inter-dimensional time incongruities to create a gap of quite a few years between hero Oz and his devoted valet, Gilbert. Though the fanservice to this end is far more subtle than in Black Butler, the situation allows for lots of lingering glances and tense undercurrents.

Mochizuki’s real talent for fanservice, however, shines through in her character designs and costuming. She fills the pages of Pandora Hearts with long, tousled bangs and oversized shirt and coat sleeves, infantilizing even her creepiest characters in a spectacularly cozy way. Though this effect is used indiscriminately, both on male and female characters, the males’ top hats, long coats, and careless tendrils enhance the look significantly.

Sometimes, of course, her artwork is just very, very pretty. 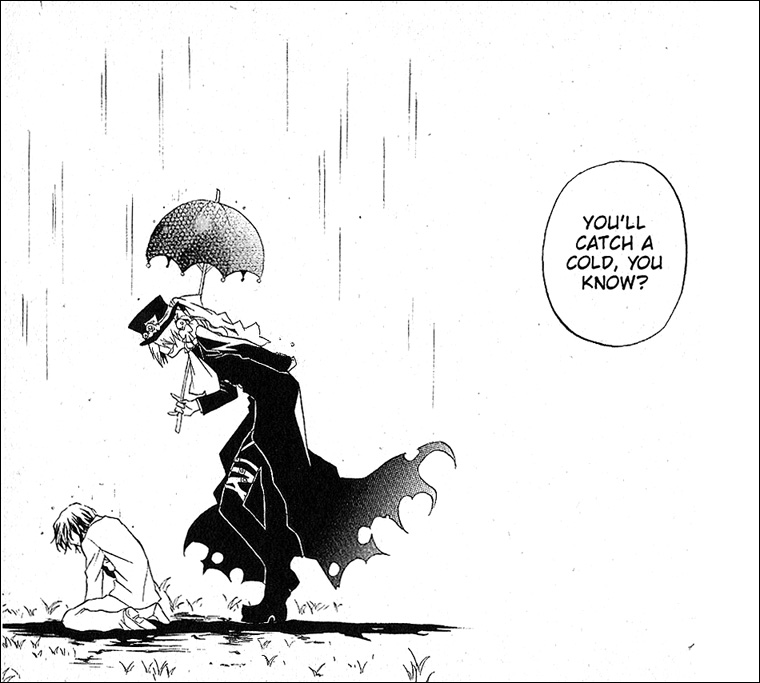 In the face of all this girl-centric fanservice, the question burning in my mind has been, “Is shonen really the demographic for this magazine?” GFantasy runs other series, of course, that don’t fit the picture I’ve been painting, but even so, series like Black Butler or even Nabari no Ou seem especially crafted to please a female demographic. Yet a quick (and even not-so-quick) web search reveals no conversation on the topic whatsoever.

Unsatisfied, I turned to Twitter to seek out those more knowledgeable than I, and received some interesting responses from some folks who regularly buy and research magazines in Japan.

Sean Gaffney, in particular, had some interesting things to say. “… as the years have gone buy, and ‘comics for boys’ and ‘comics for girls’ have come more and more to mean ‘comics for people who have money to spend’, the genres have been busted down as the magazines cater to what people want to buy … And if that means pretty boys, hey, then pretty boys it is. Square Enix does not have a dedicated shoujo magazine, the way their competitors do … As a result, when they have a female friendly title, it has to go into one of those books.”

“But you’re right, no other title seems to lie about its genre more than GFantasy.”

And Tanbishugi pointed out these interesting facts: “Saiyuki and Loveless were originally serialized in GFantasy and later moved to Comic Zero-Sum which is a female-oriented magazine. Tactics also briefly ran in GF before it moved to another publisher.”

Also, regarding the BL background of some of the series’ authors, “Yana Toboso got her start writing Prince of Tennis doujinshi and Gackt RPS, and original BL under the pen name Yanao Rock. Naked Ape have also been fairly active in the doujinshi scene.”

And who do American publishers see as their primary market for these books? My request for insight from Yen Press received no response, but photos from last month’s Yaoi-Con suggest that women are good bet, at least for some titles.

So readers, male and female, do you read GFantasy titles? Manga Bookshelf wants to know! 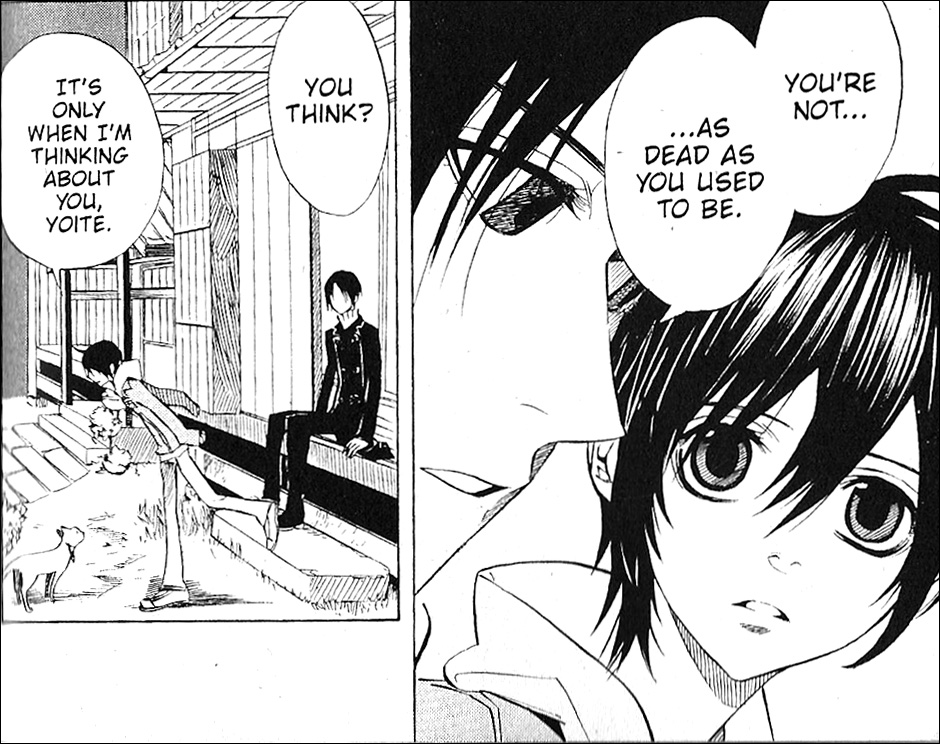 Many thanks to David Welsh who proposed the title for this feature! Check back for more Fanservice Friday on the first Friday of every month!