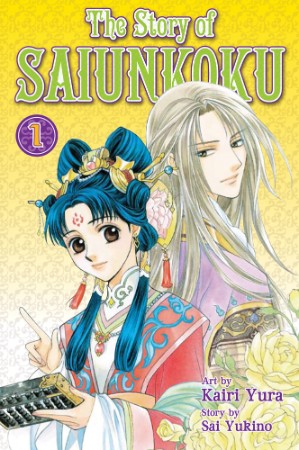 Looking at this week’s manga arrivals at Midtown Comics, it’s a week filled with new volumes of great series, including Hikaru no Go, Crown of Love, Kimi ni Todoke… the list goes on. It’s even bigger if you consider what’s expected at Comicopia, where they have previous Pick Twin Spica on the docket.

Still, this week’s choice was a fairly easy one to make, as it’s the first volume of a new shojo series that charmed me significantly from the start. This week’s Pick is The Story of Saiunkoku, based on the light novels by Sai Yukino, adapted by Kairi Yura, published in English by Viz Media.

Here are some excerpts from my review of the first volume:

“The story revolves around a young woman named Shurei Hong, whose family, despite their noble bloodline, has fallen destitute. Shurei lives with her father (and their sole remaining retainer) and spends most of her time trying to earn money for the family, so when the opportunity to make 500 gold comes around, there’s no way she can say no, even if it means becoming consort to the country’s famously ineffective emperor. The emperor is a slacker with no interest in government and even less in women–two points that Shurei is tasked with remedying with by way of her civil responsibility and feminine wiles.

Despite the fact that I’d heard positive buzz about this series… based on that premise, I admit I was more than skeptical. The manga’s opening chapter didn’t do much to sway me, either, with its gag sensibility and creepy romantic overtones, all of which seemed contrary to the gravity of Shurei’s actual circumstances.

Fortunately, it quickly became clear that my first impressions were just wrong. While the series’ premise, as stated, is absolutely correct, its execution is thoughtful and unexpectedly nuanced.”

As I mentioned in a recent 3 Things Thursday, with just one volume, The Story of Saiunkoku has become one of my favorite currently running shojo series. Buy this book!