When, just a few weeks ago, I brought to Twitter a need for a new feature for my then-empty Fridays, four great ideas were offered up, which I’ve begun rotating throughout the month. Two of these features have already debuted, Follow Friday and I Wish I Wrote That! The third came from the mind of David Welsh–a feature called “Failure Friday,” in which I could discuss bad manga. I rejected the idea at first, mainly on the premise that I love a lot of very flawed manga, at which point David pointed out that this might actually make the column more interesting.

He was right, of course, as David generally is, and when I sought out a failed manga for my very first Failure Friday, I found myself drawn to an early example of “very flawed manga” that I loved quite a lot. Not only does it have a Halloween-appropriate theme, but it was also a special challenge for me as a newbie critic. Though I’d certainly enjoyed manga of varying quality before I read this book, it was one of the first manga I was given to review formally, which put me in the position of having to analyze why I liked it despite its glaring failure. It also forced me to find words to express that, something I’ll take a second stab at today. 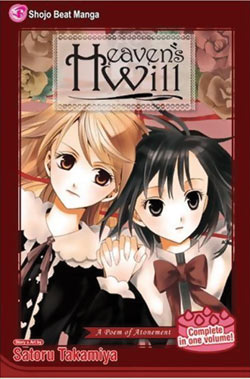 The manga is Heaven’s Will by Satoru Takamiya, published in English by Viz Media, a single-volume shojo manga about a girl, Mikuzu, who can see spirits (or oni). Mikuzu’s terrified of men, so it’s fortunate that when she meets our young hero, Seto, he’s all dressed up as a pretty, pretty girl. Besides cross-dressing, Seto eats cake, exorcises spirits, and hangs out with his quiet (but devoted) companion, Kagari, a vampire who can change into a wolf.

If you think this is beginning to sound cracktastic, we’ve barely even begun.

As it turns out, Seto cross-dresses in honor of his younger sister, whose death he feels responsible for–so much so, in fact, that he plans to get a sex change when he’s made enough money, after which he’ll transfer his sister’s spirit into his body, effectively killing himself in order to bring her back to life. Horrified by this revelation, Mikuzu is determined to convince Seto not to end his life, a conviction made even stronger by her own encounter with Seto’s sister (her spirit’s stuck in a fan Seto carries with him everywhere), who begs Mikuzu to save him.

So, here’s the thing. None of the above has anything to do with the failure of this manga. As over-the-top as this story’s premise and characters are, these are the things that Takamiya does well. She’s created an outrageous fantasy, sure, but within that fantasy, there’s believability in her characters and in their relationships with each other. Has anyone ever heard of a vampire who changes into a wolf? I certainly have not. But it doesn’t matter in the slightest, because that detail is so far from the point. Kagari is believable because his feelings and actions are believable, and this applies to everyone in the story.

There’s enough emotional complexity here to fuel a ten-volume series. Unfortunately, that’s where things break down. The concept is ambitious, but its execution falters the moment the story takes a turn that might allow it to effectively play out. Seto coerces Mikuzu into joining his exorcism business, which naturally would lead to a series of supernatural cases, each standing alone as its own story while moving the overarching plot along. It’s an overused construct, but proven to work. Still, Takamiya stumbles almost immediately, with a weak investigation into a haunted piano that offers little-to-no stakes for anyone involved and so easily solved, it’s difficult to imagine that there was any purpose to begin with. And at this point, the manga is abruptly ended.

As a critic, it’s impossible to ignore the artist’s obvious failure. Yet as a reader, I can’t help falling in love. I’ve said before that I tend to give points for ambition, and while that’s definitely the case here, it’s not the only thing drawing me back to this series. It’s Takamiya’s characters who have worked their way into my heart, and even now, I wish I might continue to follow them down their strange, poignant path.

My original review has been reprinted here, and re-reading both that and the book itself, I’m surprised to find that I actually look more kindly upon it now than I did then. Whether this is due to evolving tastes in shojo fantasy or simply an increased sentimentality as I’ve entered my forties is anyone’s guess. What both write-ups reveal to me, however, is a very clear sense of what I value as a reader. While, as a critic, I’m obliged to note things like outrageous melodrama and clumsy plotting, my personal satisfaction is derived from the story’s characterization and emotional content. And if those things are solid, I can forgive nearly anything else.

So, Heaven’s Will: “failure” or not? What do you think, readers?