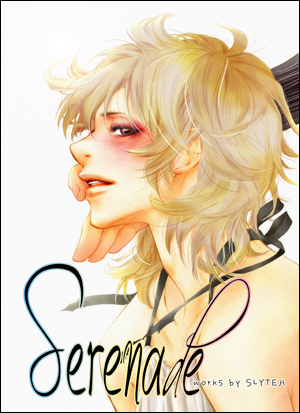 Much of our news this week comes from the Twitter account of NETCOMICS, who reported last week (among other things) on an upcoming project (not yet licensed nor in consideration for such, in case you’re about to ask) by E. Hae, author of Not So Bad and Roureville. See illustration on the right. Such a tease!

In other news from NETCOMICS, they’re just about to reopen the world of Dokebi Bride, a series languishing on indefinite hiatus in Korea that still has a volume’s worth of untranslated material available for western readers. Also, fan favorite Full House continues at long last.

It’s great timing for Full House, which I chose just two weeks ago as Manga Bookshelf’s pick of the week.

NETCOMICS also put in a plug for their parent company, ECOMIX who just joined Twitter. Korean language skills required for both of those links.

In other news, via Brigid Alverson at MangaBlog, Strategypage.com reports that South Korean manhwa has begun to seep into North Korea via bootleg CDs.

In the category of Things I Like To Rant About, the NY Times asks the question, “What is manga?” and manages to dismiss 100 years of Korean comics history by referring to manhwa as a “manga variant.” So what does Korea have to do to earn a little cultural identity around here, huh?

Somewhat related to this subject, I suppose, last week marked the release of March Story, a Japanese manga series written and drawn by Korean creators Hyung Min Kim and Kyung Il Yang, published in English by Viz Media on their Signature imprint. My own copy is on its way, but a few reviewers have already spoken, notably Manga Curmudgeon David Welsh, Comic Attack’s Kristin Bomba, and Comic Book Bin’s Leroy Douresseaux.

Elsewhere, Angela Eastman takes a look at volume two of Sugarholic (Yen Press) at Mania.com, and at Okazu, Erica Friedman takes a swipe at publishers’ clumsy translations of gay sex terms as she reviews volume six of Click (NETCOMICS).