Welcome to the October installment of BL Bookrack, a monthly feature co-written with Soliloquy in Blue‘s Michelle Smith.

First up this month, I take a short look at two one-shots, Baseball Heaven from BLU Manga and Deeply Loving a Maniac from DMP’s 801 Media. Then Michelle provides the real meat of this installment, with a thoughtful look at DMP/Juné’s In the Walnut. 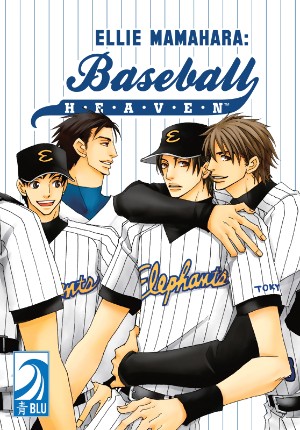 Baseball Heaven | By Ellie Mamahara | Published by BLU | Rated Mature – Tokyo Elephants shortstop Chiaki Ogata is concerned when otherwise friendly rookie pitcher Eiji Uno seems to like everyone but him. It comes as a surprise to Ogata, then, when he discovers that Uno actually believes himself in love with him. Unable to consider getting involved with a much younger teammate, Ogata declares he won’t sleep with Uno until he pitches a perfect game, hoping to delay any need for decision. Can Uno stay interested under these conditions?

Romance manga is a tricky thing. Even the most realistic example of the genre must contain some element of fantasy in order to fulfill the expectations of its readers. On the other hand, the genre also provides an opportunity for complete immersion in a fantasy space for authors who wish to explore their readers’ more unlikely desires. Where writers most often stumble is in achieving believability within the construct of this fantasy, and unfortunately that is exactly the problem with Baseball Heaven.

Though there are plenty of scenarios, even in the workplace, in which an author might reasonably insert middle-school-quality romantic comedy, complete with wacky misunderstandings, wide-eyed confessions, chaste kisses, and blushing embraces, the world of professional baseball is simply not one of them.

Had Mamahara chosen a lighter, more commonplace fictional universe–a restaurant, perhaps, or a supernatural detective agency (for that fantasy touch)–her sweet (if mundane) romance might have gained a little traction. As it is, however, the incongruity of the story’s setting and its characterization is just too great to be satisfying for anyone. Readers looking for fantasy will be distracted by the intrusion of stony-voiced baseball announcers, while those with any knowledge of or interest in baseball will just feel embarrassed and sad.

Could there be a great BL baseball manga out there? I surely hope so. Unfortunately, Baseball Heaven is not it. 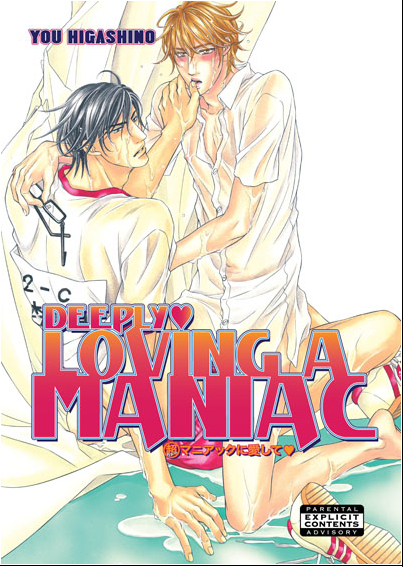 Deeply Loving a Maniac | By You Higashino | Published by 801 Media | Rated Mature (18+) – Morita is a dedicated otaku, who up until recently had spent all his waking hours buried in magazines filled with drawings of scantily-clad anime girls. This was before he met Sakura, a sexy, gay classmate and his first true love. Though trading in endless 2D girls for one hot 3D boy comes pretty naturally to Morita, he’s worried about what Sakura must think of him as a sex-obsessed otaku with no interests other than him. Can joining the track team make him into a more desirable man?

The answer is, hilariously, “yes,” a sentiment that might be applied to nearly everything in this oddly realistic piece of cracktastic pornography. Though perhaps this is due more to the high school yaoi genre’s predisposition to saccharin romance than it is to You Higashino’s actual skill, there is something incredibly refreshing about a story featuring two high school guys who simply admit to being total horndogs.

Really, though, it’s not just that. While the manga is steeped in explicit sexual fantasy, even from its very first pages, it is, overall, one of the most realistic depictions of actual high school boys I’ve yet to see in this genre. Though they each have their own urgent emotional concerns (Sakura’s worried that Morita’s new athletic-induced hotness will turn him back onto girls, and Morita wonders whether his obsession with a Sakura-like anime figure constitutes “cheating”) they are unable to communicate any of it to each other in a remotely coherent way. Sakura rages, Morita spaces out, and if they’re not really successful at anything but sex, that’s okay, since it’s all they’re really thinking about anyway.

Higashino’s artwork is filled with over-the-top BL imagery that manages to be genuinely sexy even as it pokes fun at the genre’s most ridiculous tropes. Her voice is satirical but never cutting, and she’s careful to skewer her characters (and readers!) with love. And for that we love her right back. 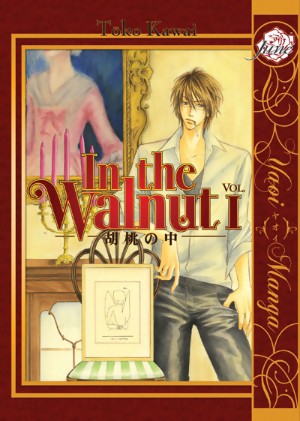 In the Walnut, Vols. 1-2 | By Toko Kawai | Published by Juné | Rated YA (16+) – The back cover of In the Walnut‘s second volume describes the series as “light and quirky.” While both are true at times, that makes it sound a lot more frivolous than it really is.

In what is a welcome departure from the typical BL formula, the leads are an established couple: sloppy and enigmatic Hideo Tanizaki, who has inherited a gallery (the titular In the Walnut) from his grandfather, and Sohei Nakai, a cheerful aspiring filmmaker. In the Walnut is known as a gallery that doesn’t ask too many questions, so Tanizaki is constantly fielding requests that seem a bit shady.

In the Walnut reads more like a mystery than a romance, as Tanizaki encounters a new art-related puzzle each chapter and must figure out what’s going on. Coincidence plays a huge factor in these “cases,” like when Tanizaki is asked to restore a battered old painting only to have a customer offer him its twin later the same day, or the way Tanizaki solves the mysteries—in a manner reminiscent of the TV show House—thanks to Nakai saying or doing something that sparks a realization.

While the cases themselves really are not that interesting, the same can’t be said for the characters. Eventually we do go back in time to see how Tanizaki and Nakai met, and while their current-day relationship seems rather casual, the depth of their feelings for one another becomes more clear as the series progresses. I also love that they talk to each other about things other than their relationship—if there were such a thing as a BL Bechdel Test, this would pass! True, Nakai, being the cheerful one who “grew up among goats” in Hokkaido, doesn’t really get fleshed out too much, but Tanizaki is a delightfully complicated character.

In early chapters, Tanizaki does a few things that might be construed as wrong but which have beneficial results for his customers. From this, we conclude that he’s a good man. Nakai reaches the same conclusion, and when he tells Tanizaki so, the latter is surprisingly affected, thinking, “I needed to know that I’m not evil.” But! It turns out things aren’t so cut and dry after all when, in the second volume, Tanizaki sells a painting to a young woman who lacks artistic knowledge for nearly six times its worth and later fails to tell another customer the full story behind what appears to be a cheap souvenir. He does do good, but sometimes his actions are spurred by greed rather than benevolence, which is a dichotomy I find intriguing.

Ultimately, I enjoyed In the Walnut quite a lot and it’ll be a sad wait until the third volume (just released in Japan earlier this month) finally makes its way here. Hopefully then we’ll learn more about Nakai!