With this year’s New York Anime Festival (now combined with New York Comic Con to form one massive SUPER CON) just days away, I’m struck by what’s happened in the last year, and particularly the contrast between Where I Was Then and Where I Am Now in terms of web presence and mission.

Last year was only my second time attending NYAF, and my very first time as press. I was lucky enough then to be shepherded through the con by the likes of MangaBlog‘s Brigid Alverson and super-librarian/author Robin Brenner, who not only put up with my utter lack of know-how, but who also graciously introduced me around to publishers, editors, and other members of the press. I remember vividly Brigid’s restrained (but obvious) frustration as she attempted to explain to people who I was despite my pathetic lack of business cards or even a coherent website address. In those days, I called my blog “There it is, Plain as daylight” (a bit of song lyric borrowed from an obscure Frank Loesser musical) on a domain called eyeballman.com, originally created to promote a CD I released back in 2002. And not only was “manga” featured in neither the blog’s title or url, the main image spread across the top of the page was a photo of my dog.

The one thing I came away with from last year’s con (besides an overwhelming feeling of gratitude towards Brigid, Robin, and all the other kind folks I’d met in the press room at the Javits Center) was that my branding sucked, and my “professional” reputation along with it. A month or so later, I re-vamped my website, giving it a new, manga-centered design and a brand new domain, mangabookshelf.com. In December I had business cards printed with the new website name and logo, and I began the new year with the goal of establishing a coherent feel for the site with more weekly/monthly regular features and a distinguishable personality.

Whether I’ve achieved the latter is not something I can necessarily judge myself, but Manga Bookshelf is now home to several regular features, including Manhwa Monday (hosted at sister site, Manhwa Bookshelf), Pick of the Week, Off the Shelf and BL Bookrack (both with Soliloquy in Blue‘s Michelle Smith), and the bi-monthly roundtable Breaking Down Banana Fish featuring a host of my favorite critics. Over the summer, I redesigned the site to better highlight its regular features (which have really become the heart of the blog), and just last night I finished a second redesign to refine that purpose (especially focusing on Pick of the Week) and to tweak the layout so that might have a more familiar feel for readers who are accustomed to a blog-style look.

So, as I get ready to head off to New York once again, I’d like to revisit and ponder on the evolution of this website, presented here in visual form: 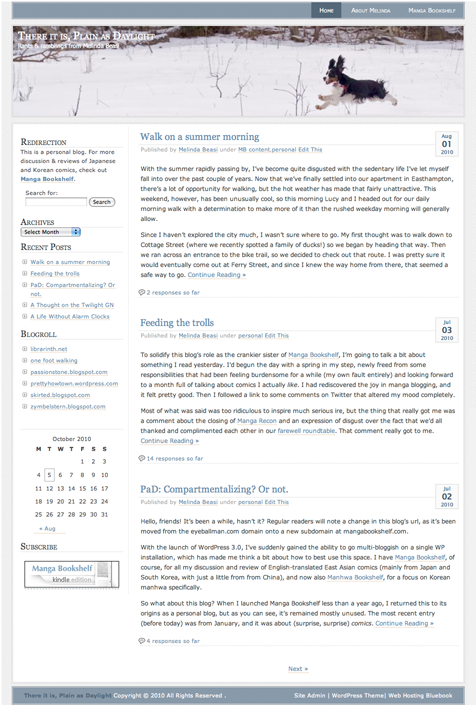 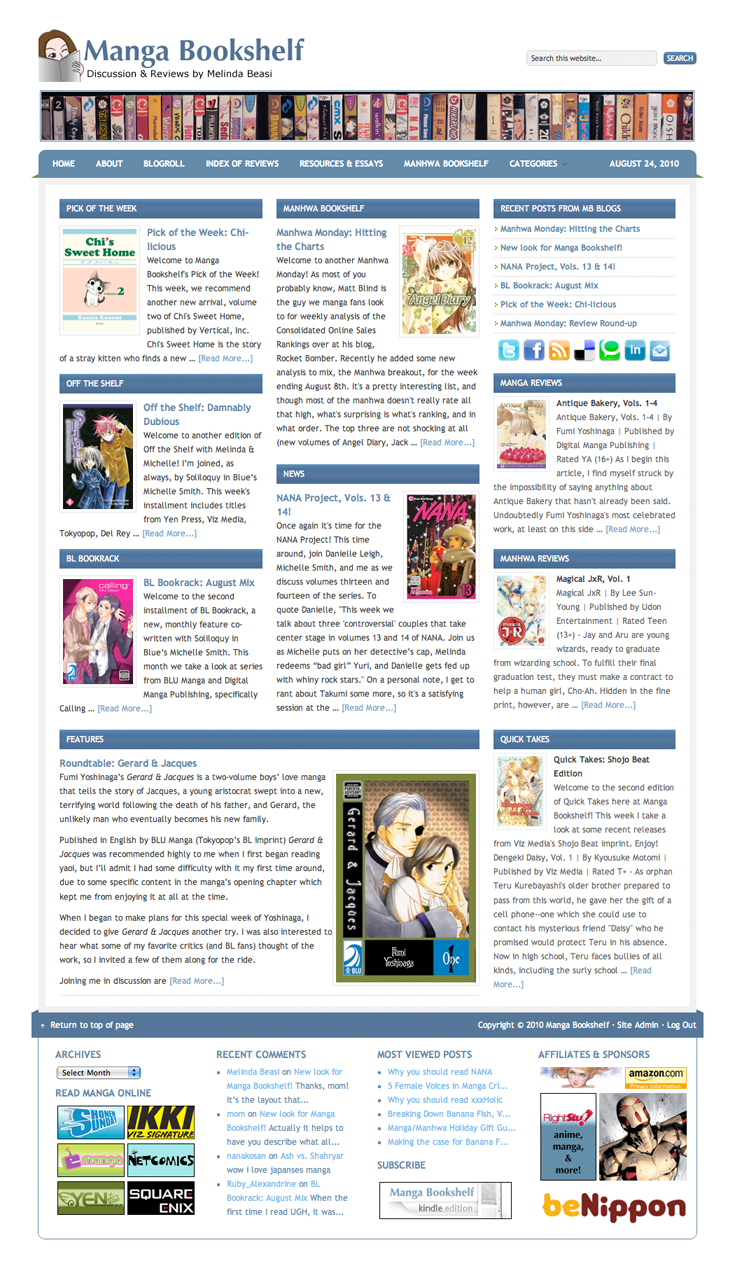 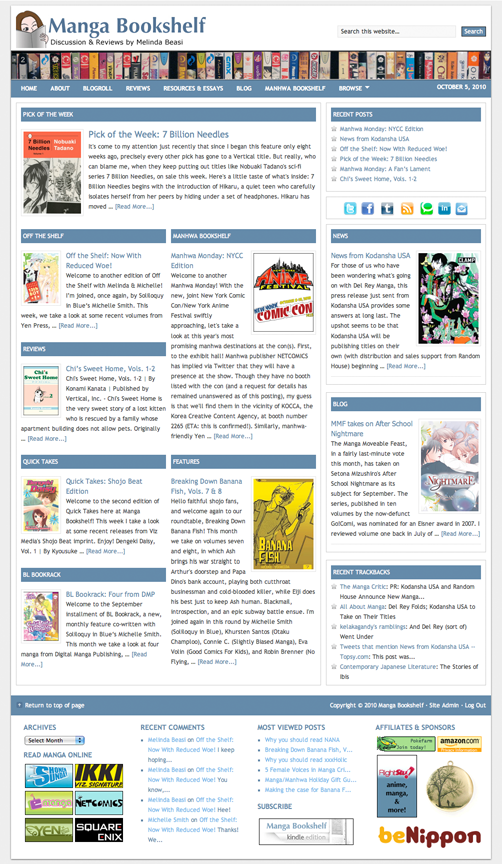 Speaking of NYCC/NYAF, be sure to check out my list of manhwa destinations in yesterday’s Manhwa Monday column. My schedule is a bit up in the air, but places I can surely be found include Yen Press‘ panel on Saturday afternoon at 3:45 and Vertical‘s panel Saturday evening at 6:15. Please find me and say hello! Ask me for my card. I HAVE THEM NOW.

Manga Bookshelf will likely be a bit quiet over the next week, aside from whatever news I may pick up at the con. In the meantime, here are some links with which to spend your time:

At The Hooded Utilitarian, Erica Friedman discusses her conflict with other manga bloggers (one of which was me) over the nature of The Bechdel Test. It’s a very thoughtful article with a lot of great discussion in comments. At The Manga Curmudgeon, David Welsh adds a few musings of his own.

And In the wake of yesterday’s announcement from Kodansha USA, Brigid Alverson rounds up much of the commentary from the manga blogosphere. I’ll also add David Welsh’s comments to the mix.

Look for a new Pick of the Week later today! See you then!