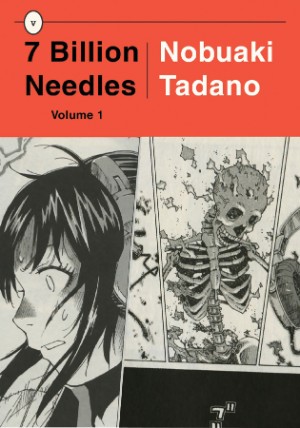 It’s come to my attention just recently that since I began this feature only eight weeks ago, precisely every other pick has gone to a Vertical title. But really, who can blame me, when they keep putting out titles like Nobuaki Tadano’s sci-fi series 7 Billion Needles, on sale this week. Here’s a little taste of what’s inside:

7 Billion Needles begins with the introduction of Hikaru, a quiet teen who carefully isolates herself from her peers by hiding under a set of headphones. Hikaru has moved to a new town where she’s living with her aunt, but she’s still thinking about the island she left behind. When, in the manga’s first few pages, she’s obliterated by a ball of plasma falling from space, it seems likely that she’ll leave the world without ever really engaging with it, but in the end she finds herself back at school with no memory of the incident.

As it turns out, the alien entity that killed her did something “unforgivable.” Unable to let her (or itself) die, it joined with her to rebuild her body, but must now reside in her bloodstream for both of them to survive. This arrangement pulls Hikaru into a war other humans don’t even know exists, but more importantly, it forces her to reach out to her classmates, with surprising results.

Inspired by Hal Clement’s 1950s sci-fi novel, Needle, but set firmly in the present, this volume feels nostalgic and contemporary all at once–a dichotomy that is only enhanced by being presented on manga’s standard black-and-white pages. And though the premise is perhaps not quite original, as with most manga, the plot here is somewhat beside the point. The real story driving this volume is Hikaru’s own personal journey and the beginnings of her tenuous connection to the other seven billion people with whom she shares the planet.

Hmmm, sounds like I’m already accidentally writing my review, eh? I’ll put a cap on the rest of it until the proper time and place, but suffice it to say for now that I raced eagerly through the first volume the moment it turned up in my mailbox. For fans of character-driven sci-fi, 7 Billion Needles is a must-read. Pick it up this week!