Welcome to the September installment of BL Bookrack, a new, monthly feature co-written with Soliloquy in Blue‘s Michelle Smith.

This month we take a look at four manga from Digital Manga Publishing, Cafe Latte Rhapsody, Garden Sky, and The Tyrant Falls in Love from their Juné imprint, and Double Cast from DokiDoki. 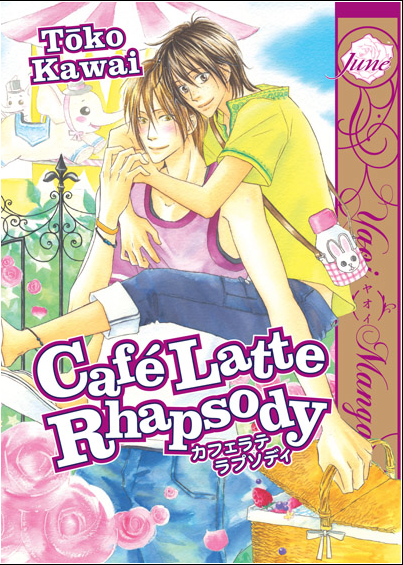 Cafe Latte Rhapsody | By Toko Kawai | Published by Juné | Rated 16+ – Freckled and good-natured Hajime Serizawa works at a book store. One day, while attempting to fill an order, he comes across a huge customer with a piercing glare. Serizawa’s scared of him at first, but when the customer kindly fetches a book that the diminutive Serizawa can’t reach, he wonders if his first impression was mistaken. Further observations reveal that the huge customer is the kind of guy who tidies up books misshelved by other customers and saves abandoned kittens in the rain. In other words, not scary at all!

Serizawa learns that the customer’s name is Keito, and they strike up a friendship initially based upon finding the kittens a home. Keito discovers that Serizawa is gay when the latter’s no-good former lover comes by to hit Serizawa up for money, but it doesn’t seem to bother him. Little by little, they fall in love and it’s just about the sweetest, cutest thing on the planet.

Rather than the story fizzling at this point, it actually gets even better. Serizawa, at 23, has been in relationships before but none ever worked out. Even now, when it seems he’s finally found a fairy-tale love, he’s thinking of the day when it’ll all have to end. As readers, we also get to know him better when it’s slowly revealed that he’s not actually as cheerful as he appears—he has some deep-seated insecurity, especially about his looks, which prevents him from expressing annoyance when the girls at work start to show an interest in Keito. He feels like he’s so unattractive, it wouldn’t be fair to ask Keito not to notice them, and instead he goes in the opposite direction and almost seems to encourage their hopes.

Sweet, cute, complicated in a very human way… these are the ingredients of some of the best BL! Toko Kawai also has a gift for staging some very natural-feeling conversations between her characters. They’re not always talking about their feelings—sometimes they talk about coffee or food they dislike, and even seem to be a pair of science nerds, though that’s not dwelt upon too much. The one complaint I could really make is that the art is a little rough, but it’s not in any way detrimental to a truly charming love story.

I’ve read a few things by Toko Kawai now and there was not a one among them that I didn’t like. In fact, I think Café Latte Rhapsody has solidified my status as an honest-to-goodness fan. 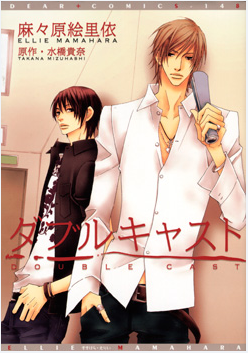 Double Cast | By Ellie Mamahara & Takana Mizuhashi | Published by DokiDoki | Rated 16+ – Yuki Yamamuro is a charismatic idol whose stage work in a modern adaptation of Goethe’s Faust is just a way of killing time while he waits for his stalled television career to revive. When he fears that the young actor double-cast in his role may be making moves on his producer (and occasional lover), Otaki, he tries to manipulate his rival into falling for him instead. Unfortunately for Yuki, the other actor, Sawaki spots his efforts a mile away, setting up a level of rivalry between them that Yuki is neither emotionally nor artistically prepared to face.

The promotional copy for this manga is filled with phrases like “seemingly innocent” and “game of love.” With words like these in mind, one imagines a cast of sexy idols sharing arch glances and little substance–at best a sly, humorous romp. What Double Cast actually offers, however, is a surprisingly insightful and even touching exploration of insecurity, confidence, ambition, and art.

Initially portrayed as an arrogant player (both for the story’s audience and in the character’s own mind), Yuki’s emotional deterioration is swift and true, betraying the inherent vulnerability of anyone whose self-worth and livelihood are both reliant on the approval of strangers. Both the challenges he receives from his better-trained rival and the truths revealed by his nurturing producer are perfectly calculated to either ruin him or save him, depending on your point of view. Meanwhile, Sawaki’s bitterness over the natural charisma of his less-educated (and arguably less-talented) co-star is palpable, manifesting itself as both resentment and desire, neither of which conforms to his high ideals or his careful career plans.

That the story’s theatrical setting is one of a handful in which a cast of characters made up almost entirely of gay men seems genuinely plausible surely adds to its realistic feel, but there is really very little fantasy involved here at all. Aside from whatever liberties may be taken with the workings of the Japanese entertainment business, the characters’ emotional journeys feel very authentic to their necessarily self-centered careers.

Mamahara’s artwork is attractive, if uneven. Though the visual storytelling flows well, her male characters in particular feel stiff and awkward, with expressionless faces outside of their occasionally haunted eyes. She has better luck with her few female characters. Yuki’s ambiguous girl friend, Kaho, is downright luminous (as is her adorable pet cat) offering a refreshing contrast to the stony-faced leads and perhaps deliberately creating sympathy for a girl who is ultimately destined for heartbreak. 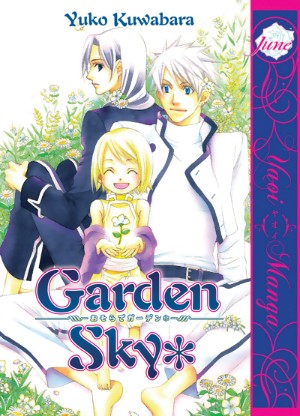 Garden Sky | By Yuko Kuwabara | Published by Juné | Rated 13+ – Garden Sky is technically a short story collection, but the stories within focus on just two sets of characters. In the first, the child-like Kami-sama (God) is lonely. While watching the pond of human lives one day, he spots an idiotic fellow who has just been shot by a jealous lover and is about to die. Figuring that bringing a dead person back as a companion does not violate the laws barring him from interfering in the lives of humans, he rescues the man, dresses him in white clothing, and dubs him Shiro (white).

Shiro’s crazy for chicks and when there aren’t any in Heaven, he convinces Kami-sama to let him pick a woman friend and, together, the three of them will become a family. As luck would have it, the woman Shiro picks turns out to be a ninja with the magical ability to change genders and she is really he, whom Kami-sama dresses in black clothes and names Kuro (black). While spazzy Shiro initially pesters reserved Kuro to adopt his feminine form, he somehow realizes that Kuro still does it for him even though he’s a guy. They seem to be growing closer and then… the story’s over.

The next set of stories, “Go East,” is more of a typical fantasy. Raiho and Yukito are students at a training school for taimashi, or fighters who combat the bevy of monsters roaming the countryside. In looks and personality, they are nearly identical to the protagonists of the earlier stories, but while Raiho is exuberant and rather clueless and Yukito is more serious, both are driven to achieve their goal of being sent to vanquish a dangerous dragon god. A decade before, a group of taimashi were dispatched to the dragon god’s lair, including Yukito’s father, thus providing Yukito’s motivation. Raiho just likes fighting monsters. They complete the task assigned by their boss to test whether they’re worthy to undertake the journey and then… the story’s over.

See a pattern here? Both tales are very light on substance, feature the same types of characters, and go absolutely nowhere in the end. They’re pretty boring while they’re underway, for that matter. The one aspect I did like is the art—it’s not groundbreaking or anything, but it’s clean and easy to read and there’s just something about the way she draws profiles that I find appealing.

Garden Sky is a disappointment. Even if you’re in the mood for a bit of fluff, surely there exists some in which stories actually conclude in a satisfying manner! 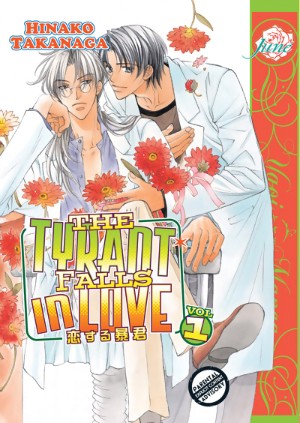 The Tyrant Falls in Love, Vol. 1 | By Hinako Takanaga | Published by Juné | Rated 18+ – Tetsuhiro Morinaga is a university student with long-held feelings for his vocally homophobic sempai, Souichi Tatsumi. Though he’s grateful that Tatsumi is willing to remain friends with him even after discovering his feelings, their close relationship actually makes the situation more difficult for Morinaga, until finally he loses control and takes Tatsumi by force.

It’s no secret how little I enjoy rape as a catalyst in BL manga, and in most cases, a premise like this would turn me off of a series completely. The frequency with which rape is used as a precursor to romance in this genre is enough to make my head spin. What makes The Tyrant Falls in Love stand out in the din, however, is how expertly the relationship between its characters is developed from the beginning, and how that changes the tone of the whole story–even the dreaded rape. To be clear, this scenario is no less disturbing to me than in any other BL rape fantasy, but far more interesting in its development and execution.

Takanaga’s skill as a writer is evident from the beginning. With sure, broad strokes she paints her main characters, letting us know exactly who they are in the very first pages, and cementing their relationship with little more than body language and a few pieces of dialogue. Her drawing is expressive and the humor is spot on. The rape itself happens less than two chapters into the volume, but even by then, and even with the use of a device so ridiculous it basically boils down to a love potion, these characters have been so firmly established, it’s not at all difficult to believe the scene as played.

It’s all sickeningly believable–Morinaga’s careful manipulation of his own thoughts to justify actions he knows are deeply wrong, the sheer horror on Tatsumi’s face as he realizes that he’s not safe with the person he trusts most–every piece of this scene rings true. And even afterwards, as Morinaga withdraws from the school in shame, the relationship between the two of them has been so well-drawn, it’s not at all unbelievable that Tatsumi might feel devastated at the loss, to the point of offering forgiveness to the person who has betrayed him in the worst way he can imagine.

Unfortunately, it’s after this that Takanaga gives in to cheap fantasy, satisfying her readers’ immediate romantic desires but sacrificing her characters in the process. Given the deep relationship between her main characters, there may indeed be a way to believably move them towards actual romance, but pushing them into a never-ending predator/prey cycle as she does here (one that is played for humor, no less) is definitely not it.

Though Takanaga’s expressive artwork and deft characterization are a significant draw, this volume ultimately disappoints. For hard-core fans only.