Let’s look at the (abbreviated) facts: 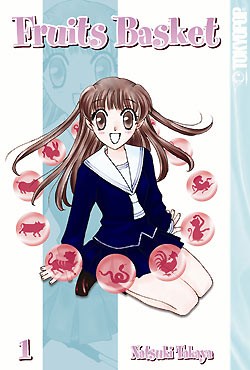 Fruits Basket tells the story of Tohru, a cheerfully eccentric teen girl who is very much at loose ends after the loss of her mother. Unwilling to burden family members she barely knows, Tohru decides to camp out and support herself, but when her tent is destroyed in a mudslide, she ends up letting herself be taken in by several members of the Sohma family, on whose property she was unknowingly living.

Soon she discovers that the Sohmas have a secret. In each generation, thirteen of the family are cursed with the spirits of the Chinese zodiac. Though the curse at first appears to be harmless and pretty amusing (the Sohmas are involuntarily transformed into their zodiac animals when embraced by a member of the opposite sex), its true nature is dark and quietly sinister, responsible for an ongoing cycle of intimidation and abuse that has haunted the family for generations. Seeing this, Tohru vows to herself to find a way to break the curse and bring relief to these people who have gradually become her new family.

Though this supernatural fantasy/drama contains some real moments of humor, it’s ultimately one of the darkest shojo series I’ve personally read. I’ve got reviews of the later volumes available here (Warning: SPOILERS). 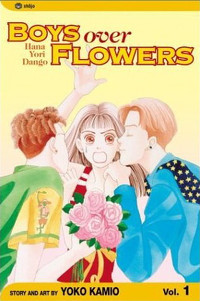 Boys Over Flowers tells the story of Tsukushi, a working-class teen girl attending an elite private academy where she is surrounded by children of the wealthy and powerful. When Tsukushi’s outrage over the treatment of a friend brings her to the attention of the school’s most notorious bullies–a quartet of boys known as the “F4”–she becomes the primary outcast and scapegoat of the school, a role she’s fiercely unwilling to play.

Thanks to her hot temper and an impressively unwavering nerve, Tsukushi finds herself at the center of the F4’s world, and though this position is initially a hostile one, she gradually becomes recognized as someone of value. Things ultimately lead to an epic love triangle between Tsukushi and two of the members of the F4, detached, dreamy Rui and hot-blooded buffoon Tsukasa.

Despite the fact that this story touches on some pretty serious issues–bullying, classism–it is at all times a romantic comedy of the lightest and most hilarious kind. Outrageously melodramatic and deliberately absurd, Boys Over Flowers is just plain fun. And though I’ve only reviewed the first five volumes, I can confirm that these values hold true to the end.

So, to restate my question: What do Fruits Basket and Boys Over Flowers really have in common? I see exactly one thing: “teen girl.”

Am I oversimplifying? Maybe. Yes, both series contain elements of romance, though I don’t see much in common there, either, between Fruits Basket‘s sweet, slow-building love story (so slow-building, in fact, it didn’t even make its way into my summary) and Boys Over Flowers‘ over-the-top romantic circus. My point here is, even among relatively recent shojo series that could reasonably be labeled “romance,” there is far too much variety to allow for blanket generalizations.

So why do critics still insist on making them? My guess? “Teen girl.”