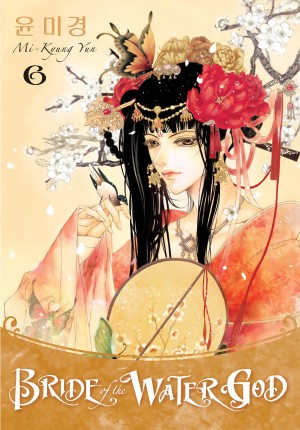 Welcome to another Manhwa Monday! With August already underway, it’s time to take a look at this month’s anticipated manhwa releases.

Dark Horse makes an appearance this month with volume six of Bride of the Water God, one of the prettiest manhwa series around. For a little background, check out Kate Dacey’s review of the series’ first five volumes at The Manga Critic.

With NETCOMICS remaining quiet in terms of print releases (and even web updates, lately) and most of Udon’s series on seemingly indefinite hiatus, the rest of the month goes to Yen Press. Yen does their best to fill the void with new volumes of a number of popular releases, including Goong, Sarasah, Moon Boy, Black God, and the dramatic final volume of One Thousand and One Nights.

For anxious readers, reviews of some of these volumes have already started to turn up online. At Manga Maniac Cafe, Julie deems volume 8 of Moon Boy, “… the best installment so far,” and states that she’ll be “counting the days until Volume 9 hits stores.” And in this week’s Off the Shelf column at Manga Bookshelf, I take a look at both volume 9 of Goong and volume 11 of One Thousand and One Nights (warning: possible fangirling).

Also this week, Ed Sizemore makes a guest appearance here at Manhwa Bookshelf, where he shares his experience with The Rise of Manhwa, a panel presented at this year’s Otakon.

At About.com, Deb Aoki talks in-depth to Yen Press’ Senior Editor JuYoun Lee about the debut of Yen Plus magazine in its new online format.

This Korean blog at daum.net offers an English-language write-up of the history of animation and comics in Korea.