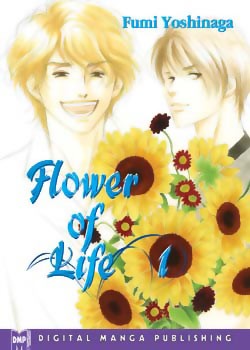 Yes, I know. This is what you’re all thinking. But “a love story” is truly the way I view this series, though perhaps not in the usual way. It’s not a tale of romance (though there is a bit to be found) or even a story of deep friendship (though it’s got that, too).

The thing is, this love story is not between any of the story’s characters at all, but rather between its author, Fumi Yoshinaga, and humanity itself. Though there are many distinctive elements to Yoshinaga’s work—her character designs, her rambling dialogue, her mild fujoshi sensibility—what is most consistently recognizable in her work is her deep and abiding love for this world and its inhabitants. And nowhere is this quality more prominently displayed than in Flower of Life.

This article is not a critique of Flower of Life, nor even an in-depth discussion of its characters and themes. Perhaps it could be most accurately described as a love letter from me, the reader, to Yoshinaga and her body of work. Just as she uses this series as a means of expressing her overwhelming love of humanity, so do I use it to express such love for her. It is, without doubt, my favorite of her works—with all its oddities and idiosyncrasies included. 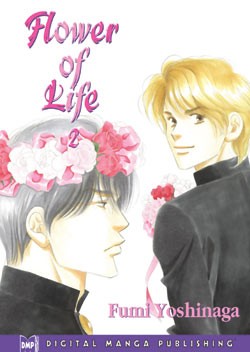 Though he’s just beginning his freshman year of high school, Harutaro Hanazono is a year older than the others in his class, thanks to a year-long battle against lukemia. Furthermore, he’s enrolling a month late. Fortunately, he finds a fast friend in Shota Mikuni, a quiet, chubby boy who shares Harutaro’s love of manga. Together, Harutaro and Shota get to know each other and all the students in their class, as they endure the usual trials (and enjoy the small victories) of high school life.

Flower of Life has very little in the way of traditional story structure or even plot. It follows Harutaro and friends (along with their romantically tormented teacher, Shigeru, and Haru’s shut-in sister, Sakura) through their first year of high school. Though each of their lives are filled with the small failures and triumphs of everyday life, there is no overarching drama or major climax in this series. Though this may make Flower of Life sound terribly unexciting, it is actually a significant contributor to its charm.

Take, for instance, the series’ opening scene. Harutaro is introduced in the first panel—a typical new student, seeking out the teacher in charge of his new class. While you’d expect the next couple of pages to be dominated by his feelings, he’s actually not the centerpiece at all to start with. Instead, we’re introduced to some of the class’ other students as they chatter away the last precious moments before the bell.

Though several are brought to our attention, the primary conversation takes place between two girls, one of whom is returning a book she borrowed from the other. Their conversation wanders to their junior high reading habits, when they were embarrassed to be seen reading in front of other students. 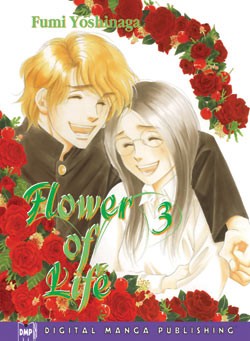 “I could never just sit alone and read a book when I was in junior high, you know?” says one of the girls.

“Yeah, when you’re in junior high, you’re at that self-conscious age. Whenever I saw someone alone during recess with their nose buried in a book, I’d admire how brave they were,” says the other.

“Me too!” replies the first.

“But by the end of third year, I finally just stopped caring and started reading, though,” the other girl admits, while the first girl points out a boy reading a manga art book.

“Even so, I don’t think I could ever be like that.”

This is Flower of Life. A new student joins the class. The students face social pressures and exams. There’s even the ever-present school cultural festival, but none of that is remotely the point. The real heart of this series is in the dialogue.

Through all their daily joys and heartbreaks, what these students do most of all is talk. They talk to each other and about each other. They make grand plans and bad jokes. They tease each other and feel sorry for it later. They struggle awkwardly through romance and friendship alike, talking and talking all the while.

Not that talk is Yoshinaga’s only powerful tool. She also reveals much through her artwork, both of characterization and pacing. Take these three pages from volume two, featuring Harutaro and his sister. 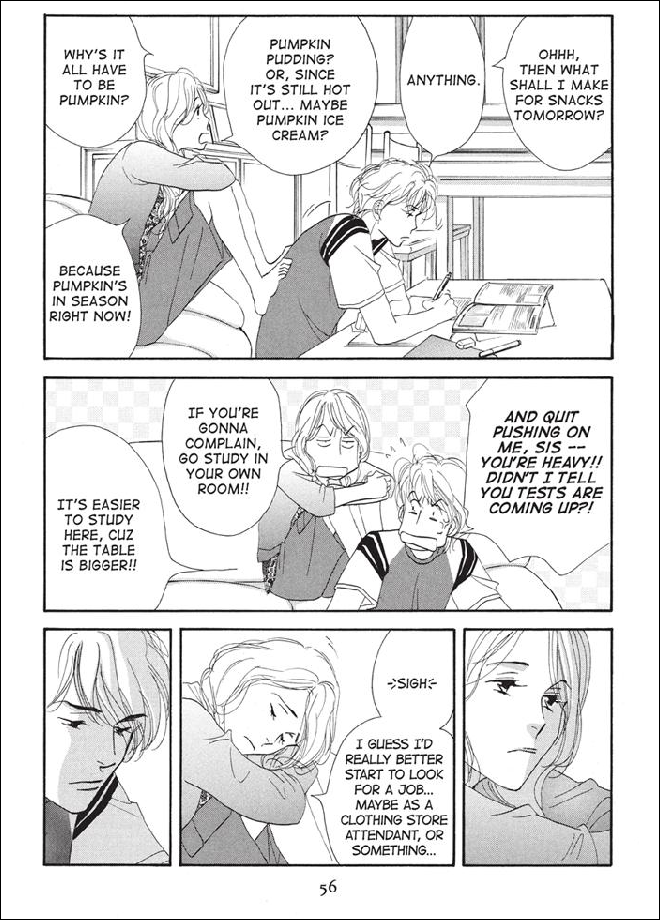 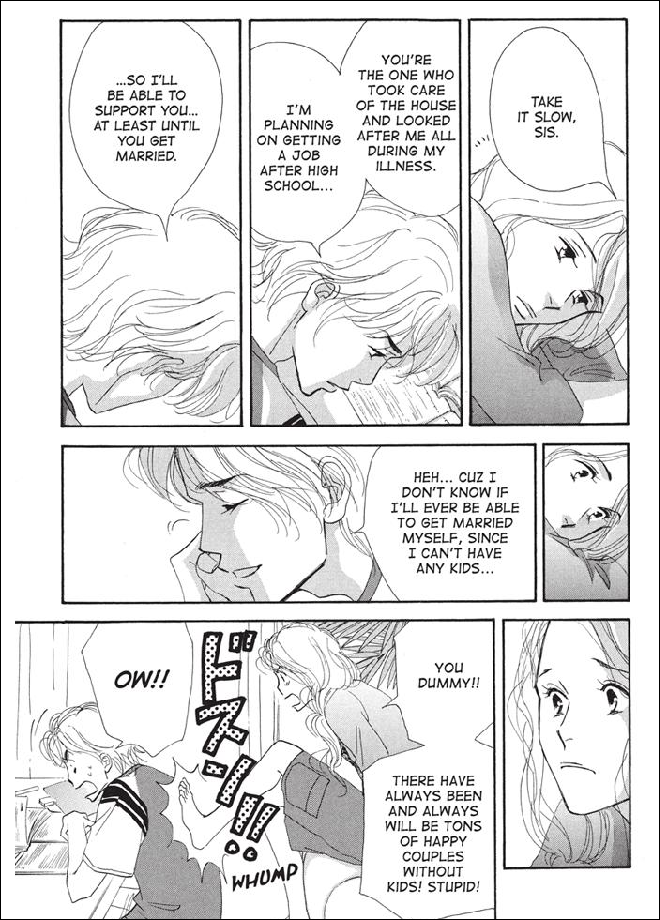 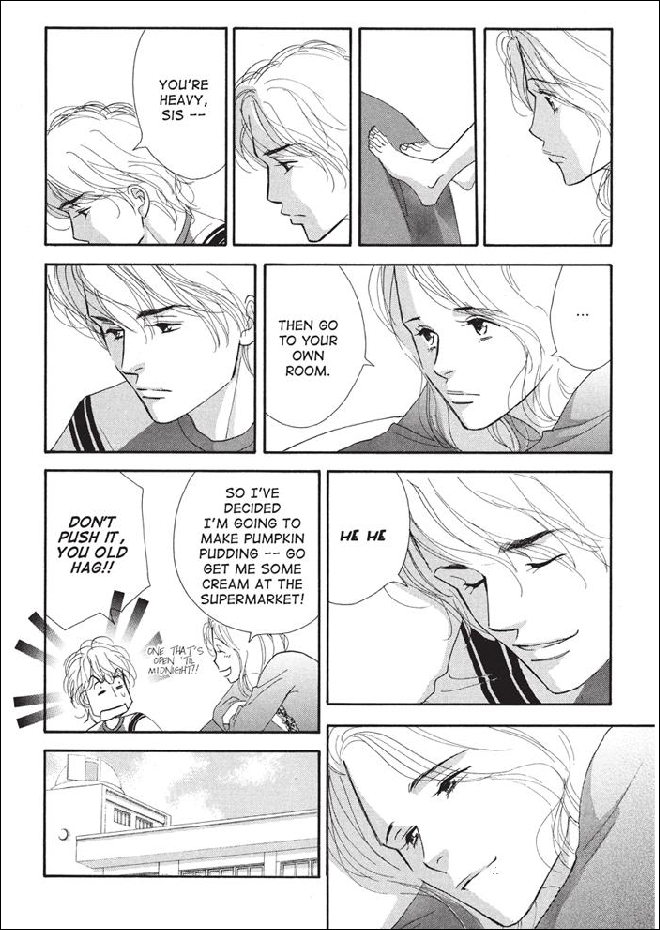 It’s the smallest gestures and expressions that make the relationship so clear—the sister’s feet on his back, his soft laugh, her fond smile. There’s a lot in the dialogue too, here, but what’s most important is what remains unsaid. In just a few short pages, Yoshinaga’s expressive style provides a pathway into her characters’ hearts and minds rare in any type of manga.

Just a few years ago, before I quite suddenly became a manga fan, I wrote a heartfelt declaration in my blog about how I could never really love comics or animation. I claimed at the time that there was a level of nuance in the face of a live, human actor that couldn’t be replicated by an artist, no matter how talented. Since then, I’ve been proven wrong time and time again, perhaps most profoundly by Fumi Yoshinaga.

Not only is she able to bring the full range of human expression into the faces of her characters, but her visual storytelling is as powerful as film, television, or stage director’s. Through her pacing and panel choices, she reveals what’s most important, great or small. 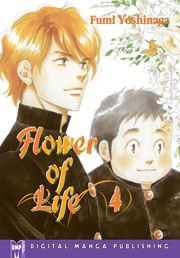 What is refreshingly absent from Yoshinaga’s work is any trace of the absolute. People are changeable and not terribly insightful, even into their own minds. They make decisions that they later go back on. Their intentions in one moment may seem foreign to them in the next. They tell each other lies–sometimes for the better, sometimes not. And they are often just plain wrong.

There’s a scene near the end of volume four of Flower of Life in which Harutaro and Shota find out that their entry for a publisher’s manga competition (one they worked all night to finish before the deadline) has lost to a couple of much stronger manga.

“So this is what manga you see once every ten years looks like…?” Shota says. “Wow… I guess mine isn’t like that… I see now.”

At this point, Harutaro is shown with a panel of narration reading, “At that moment, I knew we’d probably never create another manga together again.”

In most stories, that would be that. We’d accept our hero’s Voice of Omniscient Truth and move on wistfully with him to the next stage of his life. Not so in Flower of Life.

Just a few pages later, Harutaro realizes he was completely wrong, as Shota starts talking to him about an idea for their next manga. “What?! You want to do another one… after you were so bummed out?” Haru exclaims.

“Of course I want to do another manga,” Shota responds. “It’d be a waste to give up now … After all, I’m not trying to become a superstar… just a professional!”

Will Shota and Haru become manga artists? Who knows? Yoshinaga provides no such certainty in her work.

What she does provide, however, is a deep sense of affection for these uncertain, unpredictable people. She embraces her characters and everything about them—their best points, their worst points, and everything in between.