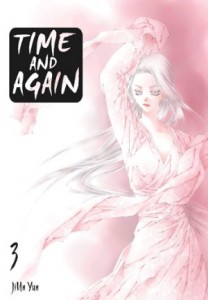 It’s a fairly quiet month for manhwa releases, with the only new print volumes coming from Yen Press, including the final volume of Pig Bride. Other releases include volume twelve of Angel Diary, volume five of Sugarholic, volume three of Jack Frost, and my personal pick of the bunch, volume three of Yun JiUn’s collection of ghost stories, Time and Again.

Time and Again has gotten quite a bit of attention this past week, beginning with the recent Off the Shelf column, in which Michelle Smith and I discuss the series’ first volume. Michelle later makes good on her promise to review volumes 1-3 at Soliloquy in Blue.

Then, at Manga Maniac Cafe, Julie takes a look at volume three, “Wow, this series really hits its stride with this volume. Each of the chapters held me enthralled, and I could not put the book down.”

Also at Off the Shelf , Michelle and I discuss Byun Byung-Jun’s Run, Bong-Gu, Run! (NBM/Comics Lit) and the first two volumes of Dokebi Bride (NETCOMICS).

Last week also saw the end of the first-ever Manhwa Moveable Feast, finishing off with an essay by Eye of the Vortex’s Alex Hoffman.

For your listening pleasure, the SSAA Podcast has recorded a Manhwa Recommendation Episode. For those who might raise an eyebrow at their oddly Japanese-centric version of the history of manhwa, here’s a brief yet much more thorough rundown from Park In-ha at LIST Magazine.