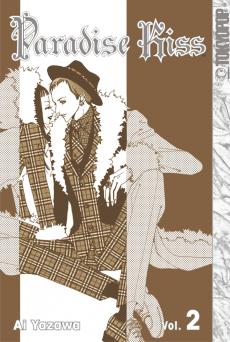 Now that June’s Manga/Manhwa Moveable Feast has ended, it’s time to look forward. And I’ll admit that I could barely contain my squee while announcing the choice for next month’s Feast, Ai Yazawa’s Paradise Kiss.

I’ve already reviewed the series in its entirety, but I look forward to having an excuse to give it another read. What I think is especially compelling about this series is that though it offers a nice helping of genuinely steamy romance (and I’m not talking sex scenes, I’m talking hot, pulse-racing, emotionally raw romance), what the story’s really about is its heroine becoming part of the adult world in a much larger sense–making real choices about her education, her career, her family, who she is as a person and who she wants to be.

The romance is a catalyst, but it’s not the point, and that’s what makes this series such a damn good read.

Michelle Smith is July’s host, so keep an eye out on her blog, where she already has posted about scheduling for the Feast. For more information on the Manga Moveable Feast in general, check out my post at Examiner.com. 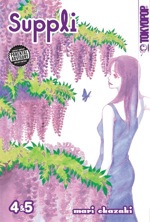 Also at Examiner.com, I’ve posted this week’s shipping news with help from Boston’s Comicopia. There are some real treats for shojo fans this week, as well as the return of Tokyopop’s Suppli, a josei favorite that many of us had given up for dead.

Elsewhere in the blogopshere, at the Hooded Utilitarian, Noah Berlatsky wraps up the recent Komikusu roundtable with a post pondering the way bloggers discuss promoting more literary comics, both in western comics and manga circles. Manga Curmudgeon David Welsh further ponders on how to define & describe one’s reading tastes.

In other news, Manga Recon calls it quits as of today, due to the shutdown of its parent site, PopCultureShock. I’ve been Assistant Editor there since early last year, and though I’m sad to see it go, I’ll be forever grateful to Michelle Smith, Kate Dacey, and Jon Haenle for providing me the opportunity to really learn now to write reviews and for introducing me to the larger manga blogosphere.

On the upside, with my obligation to Manga Recon lifted, I now have more time to devote to this place right here!

Coming up this month at Manga Bookshelf: July means it’s time for the next Banana Fish Roundtable, this time focusing on volumes five and six! Then, beginning on July 18th, I’ll be hosting a week-long look at the work of Fumi Yoshinaga, including reviews, essays, the debut of a new monthly BL feature with Michelle Smith, and a roundtable discussion on Gerard & Jacques where I’ll be joined by Michelle, Danielle Leigh, and Eva Volin. Also this month, at Comics Should Be Good, Danielle, Michelle, and I will present the next installment of The NANA Project, where we’ll discuss volumes 11 & 12 of the series.

July is shaping up to be a very exciting month, so I hope to see you all around!

One final note, don’t miss last night’s installment of Off the Shelf, where Michelle & I discuss three manhwa that didn’t make the MMF last month, Run, Bong-Gu, Run! (NBM/Comics Lit), Dokebi Bride (NETCOMICS), and Time and Again (Yen Press). We had a lot of fun talking about books we really like, and we hope you’ll enjoy reading about them!