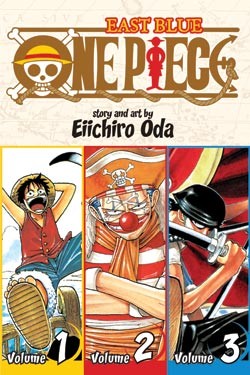 Monkey D. Luffy wants to be the king of the pirates, but after accidentally eating the mysterious Gum-Gum fruit, his body turns to rubber, ensuring he’ll never be able to swim! Nothing deters Luffy, though, and soon he’s headed off to seek his fortune in the footsteps of his idol, Captain “Red-Haired” Shanks. His goal? To make his way through the infamous Grand Line to seek the greatest pirate treasure of all time, One Piece.

The series’ first three volumes follow Luffy on a series of adventures as he attempts to gather a crew for his trek. Using his rubber-man skills (which come with special names like “gum-gum pistol”) he manages to defeat a corrupt navy captain and two cruel, selfish pirate captains with the help of the crew members he picks up along the way. “Cruel” and “selfish” are key words here, because what sets Luffy and his crew apart from the other pirates they meet is their lack of interest in pillaging and intimidating ordinary folk in order to get what they want.

By the end of the third volume, Luffy has collected two volunteers for his crew. First comes Zolo, a former bounty hunter who aims to be the greatest swordsman on earth. Later, they meet Nami, a master thief and skilled navigator who is determined to find the One Piece herself. Neither are obvious candidates for piracy when Luffy meets them. Zolo, after all, makes his living hunting pirates for money. And Nami hates pirates, to whom she lost someone dear long ago. Fortunately, whether they intend to or not, everybody likes Luffy.

And who can blame them? Luffy’s a cockeyed optimist, but more than that, he’s just an incredibly confident guy, and not in the spastic or swaggering manner of so many shonen heroes. The unearthly, smiling calm with which he faces challenges like getting sucked into an ocean whirlpool or being shot at with a canon would inspire faith in anyone. The series offers action and fighting galore, but its true strength is its grinning hero who simply takes everything as it comes.

Not that Luffy’s the only draw. Though these early volumes follow a fairly strict formula, there is enough heart to keep it from becoming tiresome. One story involving a pet store watchdog who faithfully guards the store after his master’s death is particularly touching. Also, the series’ supporting characters are exceptionally well-developed, even just within the first three volumes, and there is obviously much more about them to be revealed.

The series’ greatest weakness at this point is that its strict adherence to formula keeps any of the overblown villains Luffy faces from actually being scary. There’s no doubt at all when reading these volumes that Luffy will prevail (as always), with no major casualties among those he cares about. As a result, though the series is incredibly fun and filled with exciting action and hi-jinx, there’s never any real sense of danger. While this is perfectly fine in the short-term, as a new reader, it will be interesting to see how/if this changes over the course of the series and whether it’s enough to hold my attention.

With 58 volumes published in Japan and more on the way, One Piece has more than proven its staying power. I certainly look forward to more!

Review copy provided by the publisher. This review is a part of Shonen Sundays, a collaborative project with Michelle Smith. Buy this book at Amazon.com

Just a quick personal note: Since this is the last of our Shonen Sundays posts, I’d like to thank Michelle for inviting me into this idea of hers and for recommending two great series for me to enjoy! It’s been a great shonen-filled month. Thanks to all of you, too, for indulging us!