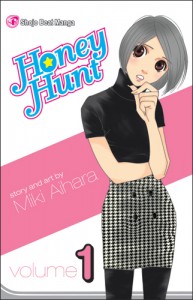 If someone had told me a week ago that I’d be praising Honey Hunt, I’d have scoffed at them; I’ve never been a big fan of Miki Aihara’s work, thanks to the icky sexual politics of Hot Gimmick!, but her story about a poor little rich girl who seeks revenge on her celebrity parents turned out to be shockingly readable. It isn’t terribly original — the plot mirrors Skip Beat! in its basic outline — nor is its heroine a paradigm of strength and self-sufficiency — she weeps at least once every other chapter — but Honey Hunt is slick, fast-paced, and perfectly calibrated to appeal to a sixteen-year-old’s idea of the glamorous life.

Honey Hunt reads like a Jackie Collins novel, shorn of the racy bits: high school student Yura Onasuka is the sadly neglected daughter of two hot-shot celebrities, one a beautiful, award-winning actress, the other an internationally renown composer. When her parents announce their intention to divorce, Yura is stunned; she had no idea that her parents’ relationship was a sham, nor did she realize that both had been actively pursuing extramarital affairs. Worse still, her mother has been sleeping with Shin, Yura’s hunky next-door neighbor and sole confidante. (I hate it when that happens.) The normally timid Yura condemns her parents’ behavior in an impromptu press conference, an outburst so dramatic and moving that her father’s former manager Keichi Mizorogi makes her an offer she can’t refuse: he’ll help her become an actress of her mother’s stature if she’ll agree to be his client.

What Yura discovers is that acting gives her an outlet for the feelings she’s normally too shy to express, even in one-on-one situations. She quickly lands a coveted gig, transforming from self-flagellating teen to pint-sized Meryl Streep, capable of disappearing inside her character’s skin — at least when the cameras are rolling. Her personal life, however, is another story. She’s caught in the middle of two impossibly good-looking twins: Q-Ta, a sensitive songwriter who idolizes Yura’s dad, and Haruka, an actor and boy-band member who makes a bad first impression (he dismisses Yura as “ordinary”) but might, in fact, be kinder than emotionally manipulative Q-Ta. (We know Haruka is supposed to be the bad boy because he uses more hair product than Q-Ta.)

On many levels, Honey Hunt is ridiculous; it’s hard to imagine someone as bumbling and miserable as Yura catching any boy’s eye, let alone two handsome rock stars who are the toast of Tokyo. Don’t get me wrong: from the standpoint of a teenage girl, it’s an intoxicating fantasy that a major-league hottie could look past your insecurities and your flaws (and maybe even your knobby knees or freckles) to see the worthy person inside the plain wrapper, but the fantasy is more alluring when the heroine’s virtues are readily obvious to the reader, and as I get older, “weepy Mary Sue” cuts it less and less for me. More frustrating still, we’re supposed to see Q-Ta and Haruka’s rather possessive behavior as signs of their devotion to Yura, rather than evidence of their own selfishness; one of them always seems to be grabbing her by the arm or engaging her in some kind of ridiculous mind game, the nadir of which revolves around what cologne Q-Ta wears.

At the same time, however, Aihara has an uncanny ability to dramatize the way teenagers really feel about the people in their lives. Yura’s relationship with her mother, for example, is excruciating; Yukari is a careerist monster of the Joan Crawford school, belittling her daughter in private while pretending to be a concerned parent in public. Yura’s sole desire is to surpass her mother, a desire born partly out of hate, but also out of need: she still craves her mother’s approval, even if her mother is colder than the proverbial fish. The way Aihara represents their dynamic may be melodramatic — I’m still waiting for a rousing chorus of “No wire hangers ever!” — but it seems like an accurate representation of the way many teenage girls feel about their mothers, however exaggerated Yukari’s indifference may be.

The other thing that keeps Honey Hunt afloat is its soap-opera plotting. (See “caught between impossibly hot twins,” above.) Aihara moves briskly from one emotional crisis to the next — a difficult audition, a mean leading actress, a fight with one of the twins — never lingering on a scenario long enough for the reader to fully comprehend its implausibility. At the same time, however, Aihara builds the tension between Yura and the Minamitami brothers slowly, rewarding the patient reader with enough clinches and confessions and stolen kisses to keep them invested in a romance that might take five or ten more volumes to resolve. Tried and true tricks, but effective nonetheless; I’m embarrassed by just how quickly I polished off the first four volumes.

The bottom line: Honey Hunt is a whole lot more fun than it has any right to be, given its cliche plot and Mary Sue lead, but Aihara’s sensual character designs, sudsy plotlines, and unswerving belief that the entertainment industry is really just a glamorous meritocracy where sincerity is a more valued commodity than hotness makes it a truly guilty pleasure. Now if only its heroine would grow a spine, I might be able to upgrade my appraisal from “ashamed to admit I enjoyed it” to an unequivocal “recommended.”