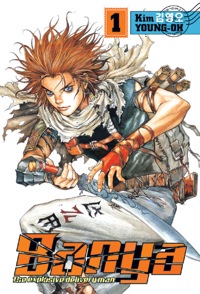 “What impresses me most about them is the sense of motion they bring to the art. There’s an energy in the action, that I think comes from the combination of more realistic figures and motion blurs added directly into the art by hand, and not thru some trick of Photoshop …In these books, despite the insane action, there’s a level of realism maintained where we can still feel it’s actors performing, and not some computer animated figures we can’t relate to.”

From elsewhere in cyberspace, the folks behind the Goong (Yen Press) musical have released a teaser poster. Over at LiveJournal, habaekai expresses glee over some recently acquired short series that were never collected into volumes, while also bemoaning the difficulty of finding such. And Comic Seoul posts a personal reading list.

It’s been a slow week for reviews, but the week offers up some real gems, beginning with Kate Dacey’s detailed look at volumes 1-4 of 13th Boy (Yen Press), a personal favorite of mine. In Kate’s words, “…what really won me over was the deft way in which SangEun Lee balanced the series’ magical elements with its more realistic ones, creating a unique story in which magical acts reveal character and everyday acts affect change.”