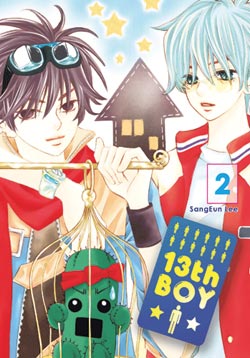 13th Boy, Vol. 2 | By SangEun Lee | Published by Yen Press – Still determined that Won-Jun is her destined true love, Hee-Soo campaigns to join the Girl Scouts so that she can attend the joint scouts camping trip along with him. The scouts are reluctant to accept Hee-Soo into their ranks since she is applying well after the deadline (and they suspect her motives are far from pure) but when Hee-Soo miraculously passes their impossible test for membership they are unable to refuse. Meanwhile, more is revealed about Whie-Young’s supernatural powers and the long-standing romantic triangle between him, Won-Jun, and Sae-Bom which Hee-Soo has complicated further. Most importantly, however, talking cactus Beatrice has a mysterious secret which provides this volume’s greatest shock!